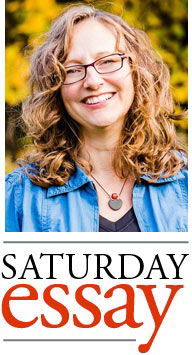 Last spring, a friend texted a picture of a plywood shanty boat to my husband, Jason. A tiny craft, its 13 feet sat trailered on a Superior side street. And at 5-feet wide, it gave off a garage-built, “I made this myself!” feel with outlandish colors and faux iron scrollwork screwed into the side. It also had balloons and a “For Sale” sign.

Squinting into my cell phone, I said, “That’s ridiculous!” Another friend, looking over my shoulder, suggested it looked like a floating puppet show. I laughed, I mean, it was meant as a joke — all of it.

That text was a response to a conversation with other middle-aged parents. Around a bonfire, we gave bold lip service to the idea of living on the water. Late into the evening, we chatted about houseboats and travel — big talk from people made of obligation, staked to mortgages and children and pets. Then, as the embers died down, we wiped the counters, fed the cat and went to bed. There would be work tomorrow because … there is always work tomorrow.

You see, houseboating is especially out of the question for us. We own a farm, or more realistically, a farm owns us. It has long made summer fun a spectator sport. That’s because agriculture is a combination of brutal labor, complex business and an unhealthy dependency on the weather. It’s a setup for heartbreak. And last spring, there were significant setbacks that had my husband moping around the house.

And it was while my despondent spouse was sprawled on the couch that I pulled out my phone again. I looked at him, I looked at the photo and considered the three-figure investment for watercraft that ostensibly slept three. “Hey,” I said, “You should go look at that boat.” Jake, the owner, turned out to be a really good guy and tried to talk Jason out of the purchase. He felt it was too small and maybe, because Jason hoped to have it in the water fulltime, a bit too wooden. Jason being Jason insisted on buying it anyway. And because the outboard motor had failed, Jason immediately went on Craigslist and found a tiny, electric trolling motor. Soon, older solar panels were being carted out of the barn, mysterious mail-order packages began arriving at the house and a book titled Boat Electricity Made Easy was on the nightstand.

“And the best part, Lu, is the power is FREE!,” said Jason. Scanning the copious packaging for batteries, gauges and panels that littered the garage, I can tell you free isn’t without cost. But there are other benefits. Rather than working the fields and livestock perseverating on all that’s wrong, Jason noodles his solar project. Chicken chores and weeding are now performed to his internal movie of the Good Ship, motoring proudly and carbon-free. Now she’s docked at the marina on the St. Louis River equidistance between our Duluth home and our Wrenshall farm. (A winter project with his brother, which included lots of epoxy and marine paint, means she can stay in a slip for the season.) My previous experience with this waterway that runs into Lake Superior was limited to seeing it from the highway at the top of the hill. It’s always been a stunner, but now I know the real beauty is found on it.

Jason and I often meet up after his day at the farm and mine at work to putter out for a couple of hours. We feel like part of the river, and are floored by the tree-dense landscape and deep, secluded bays we jump into with our pool noodles. Parts of the river feel like the Boundary Waters Canoe Area Wilderness, until you look up onto that forested hill and say, “Is that the Proctor McDonald’s sign?” Somehow, that just makes it all the more lovable.

We’re also enjoying a bit of marina subculture. It’s an eclectic assortment of folks who follow summer with the boats and RVs, locals trying to squeeze the most of the season and another group I’ll just call characters. Sometimes a knot of them will be gathered with cocktails as we motor by at our max speed of 3-miles per hour and we’ll hear their toast, “To the little solar boat!”

Thinking of how getting Ridiculous unexpectedly gave us back summer fun and winter dreaming, I shout back, “To the little solar boat, indeed.” Lucie Amundsen owns half the debt of Locally Laid Egg Company and Farm LoLa. Her narrative nonfiction book on life as an egg proprietress was released in 2016 by Penguin/Random House.

Taps are flowing at Rapids Brewing in Grand Rapids

The newest brewery on Minnesota’s Iron Range has begun serving up suds. Rapids Brewing Company opened Aug. 2 for its...