Some Notes on the St. Louis 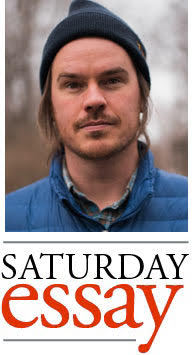 Mark in his blue jeans and cowboy boots back flipping off the Fond du Lac Bridge. Each of us following him but never brave enough to flip. Tee holding his breath for as long as he could when he hit, so we’d all run across 23 to hang over the opposite railing and wait for him to come up and shake the water from his black hair. Nearly every kid in the neighborhood soaring and only occasionally thinking of what our mothers said: ok, you know how deep it is. But do you have a map of all the swimming turtles? The tourists stopping to snap pictures of the Flying River Rats. What did we know of pollution? We’d smear the foamy river on our faces and call each other Brown Beard. Yar, we’d yell and plunge again into the water.

I have friends who love mountains more than rivers and lakes. I don’t trust them.

The 140-horse inboard/outboard screamed beneath the plywood cover. The original seats had long since rotted away, so we sat on Bowen’s mom’s old picnic table in the middle of the boat, drinking beers and smoking. Even with ten people aboard, the 140 OMC could push our 30-foot rusty pontoon to over 30 mph. We’d thread Ramboat down the river like a wonky needle. Fishermen on the banks stared as we roared by. They rarely returned our waves.

Beneath the High Bridge at night: drunk enough to think the Milky Way had come down to greet us. Chad was sitting cross-legged at the prow of the pontoon singing to himself, while a dozen other reprobates stood around bullshitting, drinking and smoking. Half-licked and tinkering with the rear navigation light, I looked up to see the Vista King about 100 yards off the starboard side. Hold on, I yelled and turned the hull into the wake, and the pontoon — all 30 feet of it — climbed the rolling wall of water and crashed back down into the river. The wave swept Chad and crushed beers and bags of chips and hoodies and coolers across the deck of the pontoon to the back where I was standing. Chad was gut laughing. Nobody else was.

On the waxy river grass, the morning sun’s a million suns.

The bay on which I grew up was 2-feet deep all the way across. The boy who fell in it would sink to his waist in silt and stink for a week. In the spring, we watched the spawning carp thrash through the shallow water. That’s what fucking looks like, my brother told me. In the fall, Warne and his wife paddled their canoe through the head-high wild rice. It was easy to tell on any given day how long they’d been harvesting. His wife was a big lady who sat in the back. Warne, a little guy, could barely reach his paddle to the water when their canoe was empty.

We listened to the river giving its lesson, which for years we misinterpreted as a daily dose of altruism. The river gives, yes, but if we listen closely, we should hear it as the most successful survival strategy there is: give, give, give.

Jumping rocks in Jay Cooke. Bonfires on Whiteside. The river has many personalities, sometimes frantic, sometimes slow and lazy. Maybe you’re drawn to the river because it reminds you of yourself, Mr. Mercurial.

On the way downtown, the river’s to the right; on the way home, to the left.

There is no math more beautiful than the snowy path to the river. No equation which equals the hanging branches shelving snow. Pink birch bark in a snow bank like a flank of salmon. The frozen river moans and cracks. Have you ever watched someone pull a sturgeon from a hole in the ice? Have you ever been so lucky as to pull one out yourself? You’d swear there’s more fish than river down there.

The St. Louis forever shoves its shoulder into the Lake. On my morning commute, I like to take note of who’s winning.

On the foggy days in Duluth, it’s like we’re inhaling the Lake, which is fine by us. Most of us born in the St. Louis River Valley were born with gills. On my first day of classes at Morgan Park Junior High, Fond du Lac had flooded again. When we were able to make it to class (two days late), our teacher announced that the River Rats had finally made it. That we probably swam to Gary to meet the bus.

The river’s the river, sure, but it’s also all the creeks and cricks and streams and backwater swamps that run into it. It’s the boys and girls who live on its banks. It’s the neighborhoods who look out at it, who watch it every night sliding away slick and black. On its back, it carries the moon and the sun. When we were young and lucky and glowing, it carried our tiny celestial bodies.

Maybe it’s because of the St. Louis, but often “The Turtle” from The Way of Chuang Tzu pops into my head. You remember the story, I’m sure: Chuang Tzu is fishing on the banks on the Pu River, when two Vice-Chancellors sent by the Prince of Chu approach and offer him the position of Prime Minister. Chuang Tzu tells them (according to Merton’s translation) about the sacred tortoise who lives in the river, who three thousand years ago was venerated and wrapped in silk and sent to the temple to be placed on an altar. Chuang Tzu then asks, “What do you think: is it better to give up one’s life and leave a sacred shell as an object of cult in a cloud of incense for three thousand years or better to live as a plain turtle dragging its tail in the mud?” The Vice-Chancellors said that for the turtle, of course, it’s better to drag its tail in the mud. “Go home!” said Chuang Tzu. “Leave me here to drag my tail in the mud!”

Ryan Vine has been working on poems for over 20 years. In 2006, his chapbook Distant Engines won a Weldon Kees Award and spent time on the Poetry Foundation’s contemporary best-seller list. Last month, Robert Pinsky selected his new manuscript as a finalist for the Dorset Prize. You can find him at ryanvine.com or @vineryan.

I've lived here for a decade. I don't know why this surprises me so much, but I went to Skyline Lanes...