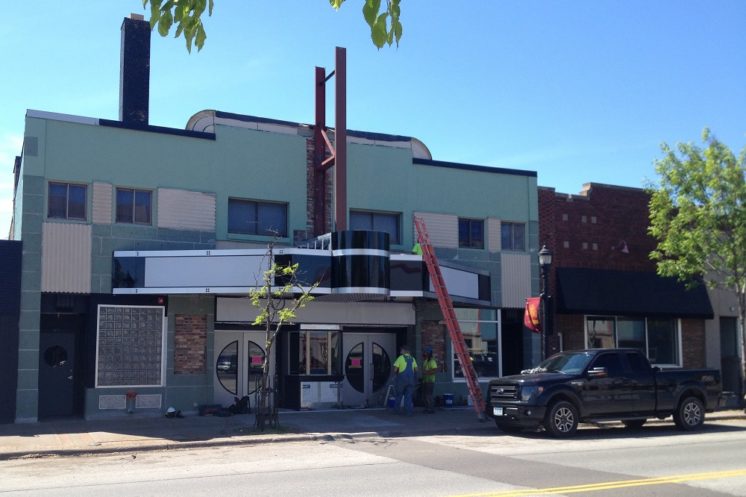 Work on the West Theater marquee continued on June 19, two days ahead of a grand opening event.

The West Theater looked nothing like its movie palace glory days when Duluth Reader publisher Bob Boone bought the building in 2016.

The long-dormant theater at 319 N. Central Ave. in West Duluth had presented its last family-friendly titles in the late 1960s. A notorious state pornographer took over the place and screened a dubious film schedule through the 1970s. Then the theater went mostly dark until 1997 when it was remodeled for small businesses, including a quilt shop which placed advertising on the chimney.

But this week the silver screen will shine again at the West Theater.

Boone and a group of investors have spent nearly three years and more than $1 million bringing the property back to life. The public will get its first glimpse at the nearly completed project during grand opening events with food, drinks and a classic film on Friday, June 21, and live music Saturday, June 22.

The historic theater restoration has been an epic tale worthy of its own feature-length film.

Boone said the project stalled last summer after he purchased a neighboring building — the former Alhambra Theater — and ran out of money. Work restarted under a new project management firm, Kraus-Anderson Construction, but budgets ran dry again as new building issues were discovered this spring.

Asbestos removal, corner foundation work and a concrete floor repour were some of the latest construction problems. The new building issues jeopardized marquee completion, curtain installation and final restroom work among other things.

“You only have one chance to make a good impression,” said Boone. “It’s a historic theater. I would rather poke my eyes out than put up half of a marquee.”

Miraculously, marquee work has continued, a valance will decorate the stage and bathrooms will be functional but not complete when doors open Friday for a screening of David O. Selznick’s original 1937 film A Star is Born. Blues guitarist Bernard Allison will be the first artist on the new performance stage Saturday night. 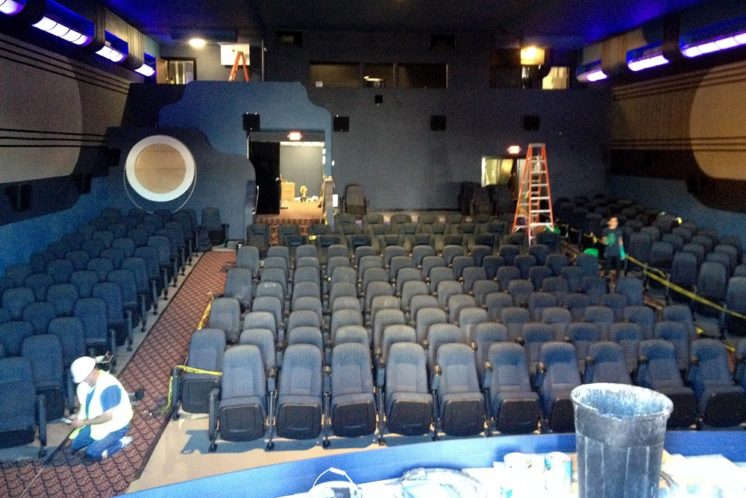 Interior work on the West Theater is near completion.

Events this weekend launch a new chapter for the small West Duluth theater.

Workers and volunteers have revitalized the building both inside and out, bringing back its original Art Deco design. The theater will seat 250 people and use a sound system purchased from a Minneapolis nightclub. New lights, new carpeting, new tile work and building infrastructure have all been added. A rear entrance was changed to direct patrons to the newly restored Central Avenue box office.

The theater will screen mainstream, foreign and classic films. It will also stage live music, theater and other entertainment as well as host recitals, meetings and receptions.

For example, said Boone, a theater in Omaha, Neb. offers multiple membership levels between $50 and $5,000. “The only difference between the $1,000 a year member and the $2,500 a year member was free popcorn,” he said. “People do it because they want to support the venue.”

Boone plans to announce the West Theater membership plan sometime after its opening.

Meanwhile, a Go Fund Me page has been set up in an effort to raise $50,000 in theater assistance. Carla Blumberg, an owner of At Sara’s Table Chester Creek Cafe, put the fundraiser together after she heard Boone, an old friend, needed funds to complete his project.

“I think it will be a real nice thing for that neighborhood,” said Blumberg. “I know how difficult it is for a person to do something without public money and I just wanted to support him.”

Blumberg said she loves the 1930s, its glamorous movie stars like Jean Harlow and the beautiful art deco buildings of the era. Recent photos of the restored West Theater look beautiful, she said.

“He doesn’t have enough money and I can’t get him to concentrate on that problem,” said Blumberg.

Boone said he appreciates the Go Fund Me project and hopes it will generate some interest.

“I nearly was bankrupt while this was dithering and figuring out,” he said. “And I’ve still got endlessly stupid compromises that, well I haven’t even get on top of, I just cut out of the budget.”

“Well, (the project) is going, but we’re definitely opening up without the curtains,” he said.

Park State Bank Vice President/Commercial Lender Bryan Lent said the West Theater project has been long and difficult but the end result will be good for West Duluth. The new theater will open on the same block as a bank branch.

“We’re happy to see something happening and moving forward,” he said. “And we’re a part of it, too.”

Lent said the restoration has made big progress in the past few weeks but a lot of finishing work remains.

“It’s a big deal,” Lent said. “It seems like there’s always a pulse in (the Duluth arts scene) and this will obviously be a big part of it.”

https://www.youtube.com/watch?v=9OYPv3PcEHs Recently released to the web, Tomas Soderberg's video for the Ann Kathryn song "Papier Mache," produced for the Homegrown...