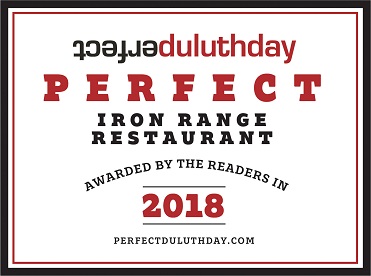 Competition was stiff in the Perfect Iron Range Restaurant poll. After a 36-hour, tie-breaking vote we can officially declare Vi’s Pizza in Biwabik the champion.

In the final poll, Vi’s Pizza had 70 percent of the vote, while BoomTown Woodfire Bar & Grill in Eveleth had 30 percent.

Clearly, no ordinary pizza joint could beat the likes of top contenders like BoomTown and Gilbert’s famous Jamaican restaurant, the Whistling Bird. But Vi’s Pizza is a veritable Iron Range institution.

The original pizza recipe was handed down from owner Kim Mattson’s Italian grandmother. Viola “Vi” and her husband Frank Urick started selling takeout pizzas out of the back of their Biwabik home in 1959. Mattson started making pizzas for the family business as an 8-year-old. Back then, her payment for working was pizza and a pop. She has fond memories and notes her grandparents’ backyard was essentially a big parking lot where people would congregate to enjoy their pies. Vi established a pizza shop on Biwabik’s Main Street in 1978. When she passed away in 1983, Mattson and her husband Jeff took over the business and still carry on the tradition today.

The restaurant has moved a couple of times over the nearly 35 years the Mattsons have owned it, but the pizza hasn’t changed. “It’s exactly the same recipe,” says Mattson.

The dough is still handmade and hand rolled. Vi’s special, secret sauce recipe is kept “under lock and key,” according to Mattson. They aim to use the freshest ingredients. They hand cut all their onions and green peppers and grind and season all their own pork.

Mattson’s sons Trevor and Travis joined the business in 2008, making it a fourth-generation family business. With its most recent move and expansion to a larger building on Biwabik’s Main Street, Vi’s upgraded its menu. Besides pizzas, spaghetti and sandwiches, it serves up burgers, appetizers, wraps and salads. Mattson notes that most everything is made from scratch.

Over the years, Vi’s has built up a dedicated base of pizza fans from all over the country, many of whom have previously lived in the area. “It’s not just that it tastes good, it reminds people of home,” explains Mattson, adding that she once shipped an order of 10 frozen pizzas to Kalispell, Mont. Even though the shipping cost was nearly $400, the customer was happy to pay the fee.

The family has put a lot of work into the restaurant. Trevor and Travis handcrafted all of the wooden tables and the bar. When asked what sets Vi’s apart from other restaurants, Mattson says, “People tell me, ‘We feel so welcome when we walk in this door.’”

It’s a tradition they plan to keep going, according to Mattson. When she and her husband retire, their sons will take it over.

Mattson was delighted the poll came out in her restaurant’s favor. “I just couldn’t be prouder. I know Grandma is looking down and saying ‘Good job,’” she says.

In an authentic showing of Iron Range humility, she was quick to credit others. “It’s not just our family, we have a great base of employees and we couldn’t do it without them … Also, the locals are so darn important. That’s what keeps our base going all year round.”

The original poll results were: Duluth top city for paycheck stretching, according to indeed.com

Indeed.com released a report today entitled, "US Cities Where Salaries Go Furthest: 2018." Of 185 metro cities, the one that...