Mystery Photo #65: Diamonds are Forever … Except in Duluth! 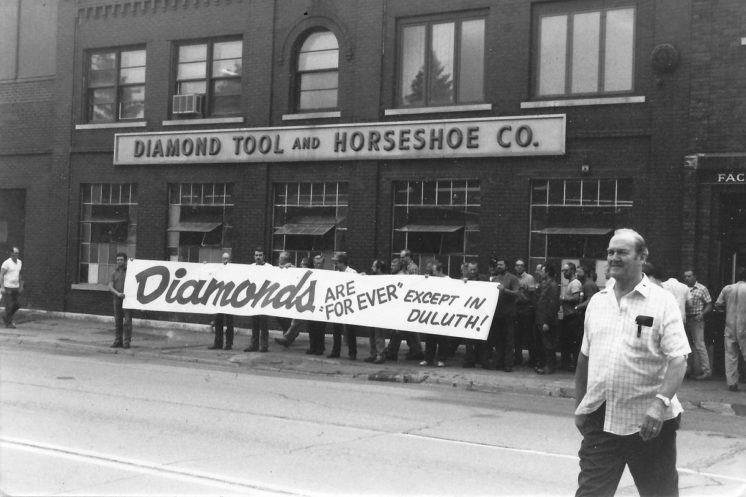 This old photo seems to show striking workers at the Diamond Tool and Horseshoe Company in West Duluth. Or are the workers protesting the closing of the plant? What year was the photo taken? Who is the guy in the foreground crossing the street? There are plenty of questions to be answered in this Perfect Duluth Day Mystery Photo.

Oh, and there are some alternate shots from that day, shown below. 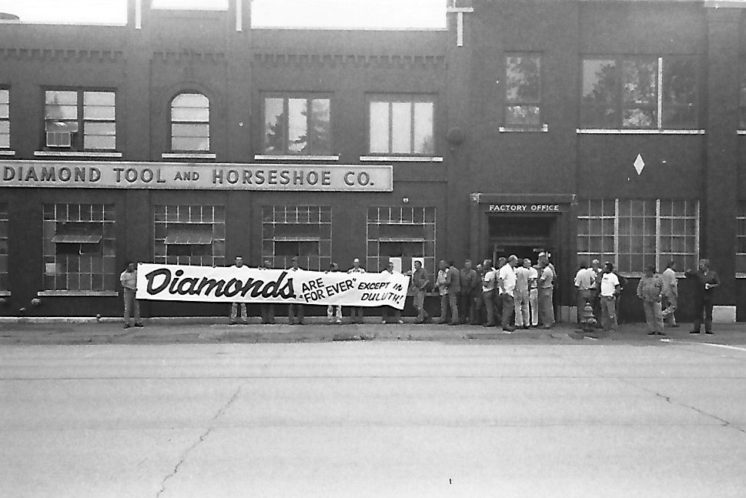 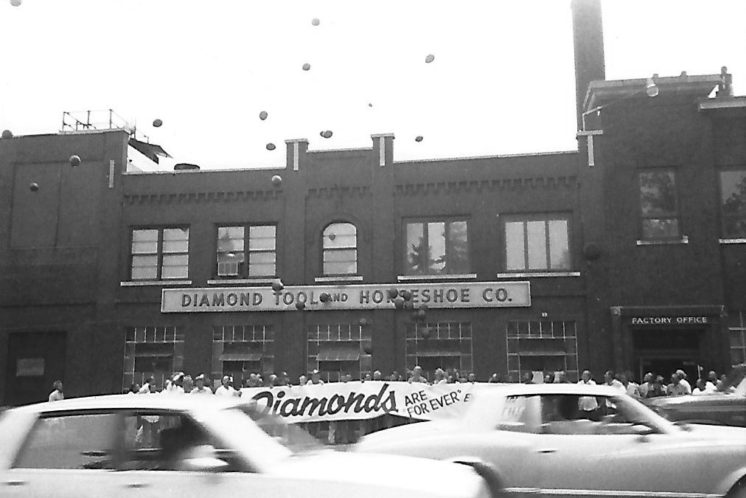 Diamond Tool and Horseshoe Co. began as a horseshoe manufacturing company operating on South Lake Avenue in Duluth’s Canal Park. It was founded on Otto Swanstrom’s invention of the drive-calk horseshoe, but later became one of the world’s largest manufacturers of wrenches and pliers.

Swanstrom was a Duluth blacksmith. His invention was a shoe that could be hammered onto the hooves of horses or mules. Previously, screw-calks had been used, which were prone to slipping off.

Diamond Calk Horseshoe Company was incorporated in 1907 with a capital stock of $250,000. It began manufacturing horseshoes in 1908, revolutionizing the industry.

In 1912 the firm built a factory at 4702 Grand Ave. in West Duluth. With the advent of the tractor and automobile, the use of horses for work decreased, but Diamond Tool changed with the times, becoming a manufacturer of more than 350 varieties of pliers, snips, nippers and wrenches. A full line of horseshoes and farrier tools, as well as pitching horseshoes remained a large part of the business. 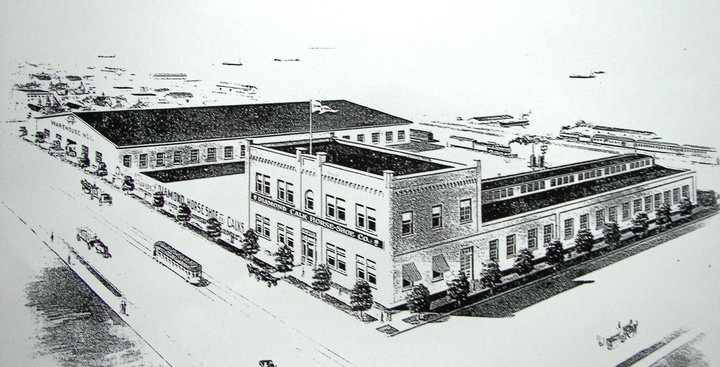 At its peak the mill had more than 800 employees and produced 3,500 adjustable wrenches a day.

Triangle Corporation of Connecticut bought Diamond Tool in 1981 with $20 million in industrial revenue bonds issued by the city of Duluth, which wanted to avoid closure of the plant. The city’s financing helped Triangle nudge out a bid by the company’s president, John Edward “Jack” Swanstrom, a Duluth native.

Triangle eventually began dismantling key equipment and shipping it to another of its plants. In 1993, Trangle sold the company to Cooper Tools, which shut down the West Duluth plant on Oct. 28, 1994. Cooper Tools later merged with another tool manufacturer to become Apex Tool Group. The Diamond Tool building at 47th Avenue West and Grand Avenue was razed in 1996. The Denfeld Retail Center and St. Luke’s Denfeld Medical Clinic were built in its place.

Jack Swanstrom left Diamond Tool after the sale to Triangle. He went on to open Swanstrom Tools USA Inc. in 1983. That company, a manufacturer of technically advanced electronic cutters and pliers forged from high chromium and high carbon alloy steel, moved to Superior in 1985. Swanstrom died in 2002 when his Cirrus SR20 plane crashed and burned on a northern New Mexico mountain. He was 58. 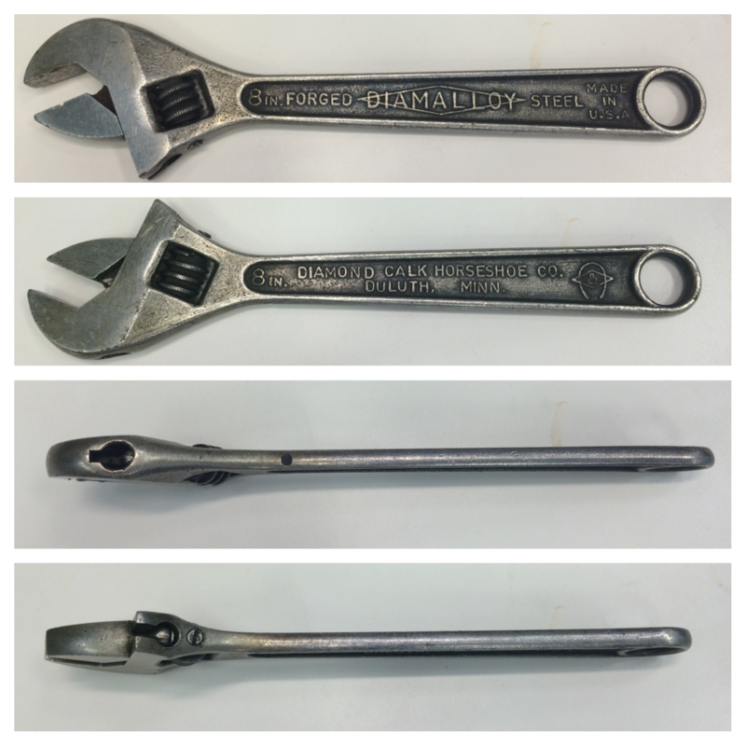 And the final photo, below, is from the Northeast Minnesota Historical Collections in the Kathryn A. Martin Library at the University of Minnesota Duluth. The “Date Created” on the item is listed as 1972. 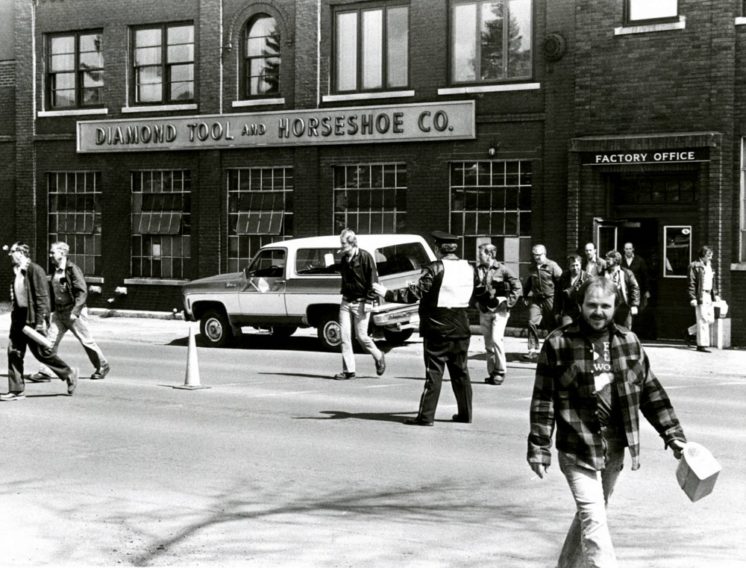