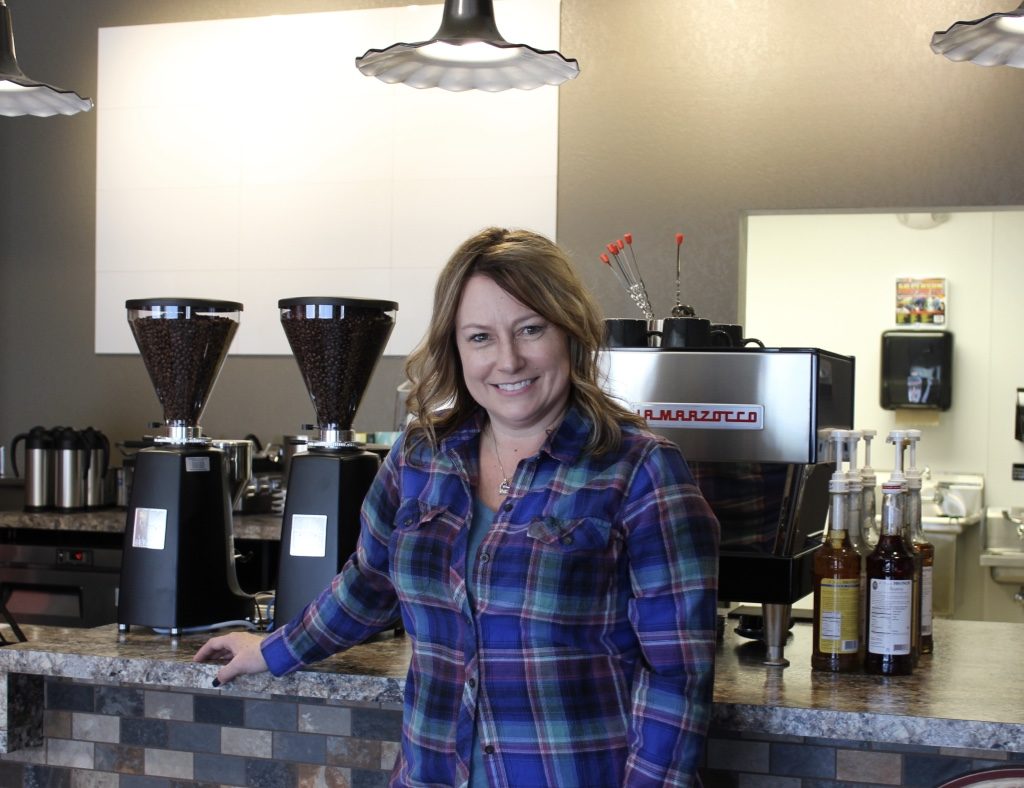 Owners Annette and Mark Jacobson have been fine-tuning their vision for a local coffee shop over the past couple of years. Annette Jacobson, who is trained as an accountant and has an MBA, says she’s always wanted her own business.

Jacobson has a bit of a coffee obsession. Many of her memories from childhood include coffee. It was integrated into everyday life at her Finnish grandparents’ house. She fondly recalls drinking coffee mixed with sugar cubes out of a bowl at their house.

She visits coffee shops daily and appreciates the culture they cultivate. “I like interacting with people, talking to them and being social.”

Finding the right business location took some time. “We really wanted to be in Superior. Mark and I are from Superior and wanted to contribute to the community in a positive way,” says Jacobson.

The couple ended up settling on an old salon space — former Harvey’s Family Hair Care — and redesigning it to meet their needs. A suspended ceiling was removed, as were some interior walls. New flooring and lighting were installed, as was as an oven for baking. Jacobson’s proclivity for creating sweet treats started as a child as well. She baked regularly with her grandmother and continued the tradition into adulthood. While searching for the right business location, she ramped up her baking, testing recipes at home.

“It became a big passion of mine,” Jacobson says. “I asked friends to critique me. There were never any bad comments.”

The “twisted” part of the pastries comes from Jacobson’s penchant for experimentation. She likes to infuse “interesting and fun” nontraditional ingredients into her cupcakes, such as local tea, coffee and craft beer. Beer butter and chai tea cupcakes are just two of the more unusual recipes she’s perfected.

In addition to cupcakes with rotating flavors, the shop will sell scones, baked donuts and muffins. Customers can special order sweets for events like meetings, weddings and birthdays.

Besides pastries, the shop menu features paninis. Jacobson expects to cater to busy families and promises a couple of the items are kid-approved (tested by their own kids). Patrons can expect a sandwich served with a pickle and chips to average about $8.

Twisted Pastries will serve Duluth Coffee Company products. Owner Eric Faust reached out to the Jacobsons when he learned they were opening the shop. Faust’s expertise and connections have been instrumental throughout the business planning and build out, according to Jacobson.

Twisted Pastries has a mix of seating options, from traditional tables and chairs to a bar and cozy swivel chairs. A nook in the back features a larger table to accommodate groups. Jacobson envisions the space being well used by community organizations or book clubs.

Jacobson notes the business’ Facebook page has garnered a lot of positive attention already. “It reinforces in my mind that there’s a need for something like this in the community and that we will be successful,” she says. "If you don't like the weather in Duluth, wait five minutes." "The coldest winter I ever spent was a summer...