It’s been about 12 years since I’ve had cable television. My only exposure to it these days is when I’m on vacation and lodging somewhere it’s offered. My wife will search the channels for some kind of garbage to watch, then she’ll fall asleep and I’ll flip the channels, eventually stopping on network television unless one of those ESPN 30 for 30 documentaries is on.

I had access to cable television for most of the era spanning roughly 1980 to 2006. I use the word “access” because throughout that period, one thing remained constant: I never paid a cent for it. Don’t get me wrong, I never stole cable (other than trying to watch scrambled HBO). I was just fortunate enough to live with people who were willing to pay to watch television. First it was my brother, then my dad, then various roommates and finally my wife. When Netflix hooked her it was the end of cable in our house.

My wife’s decision was a blow to me at the time because I was paying nothing to watch dozens of programs. The documentaries on VH-1 at the time were supremely seductive, and they were only slightly better than the constant access to police chases and outrageous videos provided by about six other channels.

You might think it would have been only fair for me to have offered to chip in on cable, but I disagree. There’s no question I loved watching it, but I also found no real value in it. I don’t miss it at all now that it’s gone.

The loss of what was about 50 channels wasn’t a big concern because there was plenty to watch on the five free broadcast channels available in Duluth in 2006. Ironically, it turns out the people who love television the most are the people who have the least need for more channels.

One thing that’s stuck in my mind from the early days, when my parent’s paid for cable, is the old KMSP-TV slogan: “We’re receptive.” Back then, I had no idea what that slogan meant. It must have been a way of communicating to Twin Cities area broadcast viewers that KMSP had a strong signal that produced good reception even out into the suburbs. Watching it in Duluth on cable, with my little kid brain, I wondered, “What are they receptive to? Are they soliciting my opinion and promising to give it ample consideration?”

Within a few years of my wife dropping cable, broadcast television made the switch to digital, which meant the bonus of added subchannels but also meant spending money on antennas and converter boxes — and then having programs cut out anyway. Somehow the new technology made watching television more difficult than when I was a kid.

I used to turn on the TV and immediately see Dennis Anderson or Johnny Carson’s smiling faces. Now I press “power” and watch a red light blink, then an Insignia logo appears, and finally nine seconds later a program pops on. Not that nine seconds is a long time to wait, but you’d think technology would improve during my lifetime instead of regress.

During my years between cable and broadcast digital, when I watched analog TV, I didn’t spend any time at all jostling the rabbit-ear antennas around. TV worked. Now the picture is clearer when it works, but I still, in 2018, have trouble getting all the channels to come in with an omni-directional flat antenna. Every now and then someone tells me I should install an outdoor antenna, and I point out that it’s easier to just switch to whatever channel tunes in. How hard am I supposed to work to watch commercial TV? 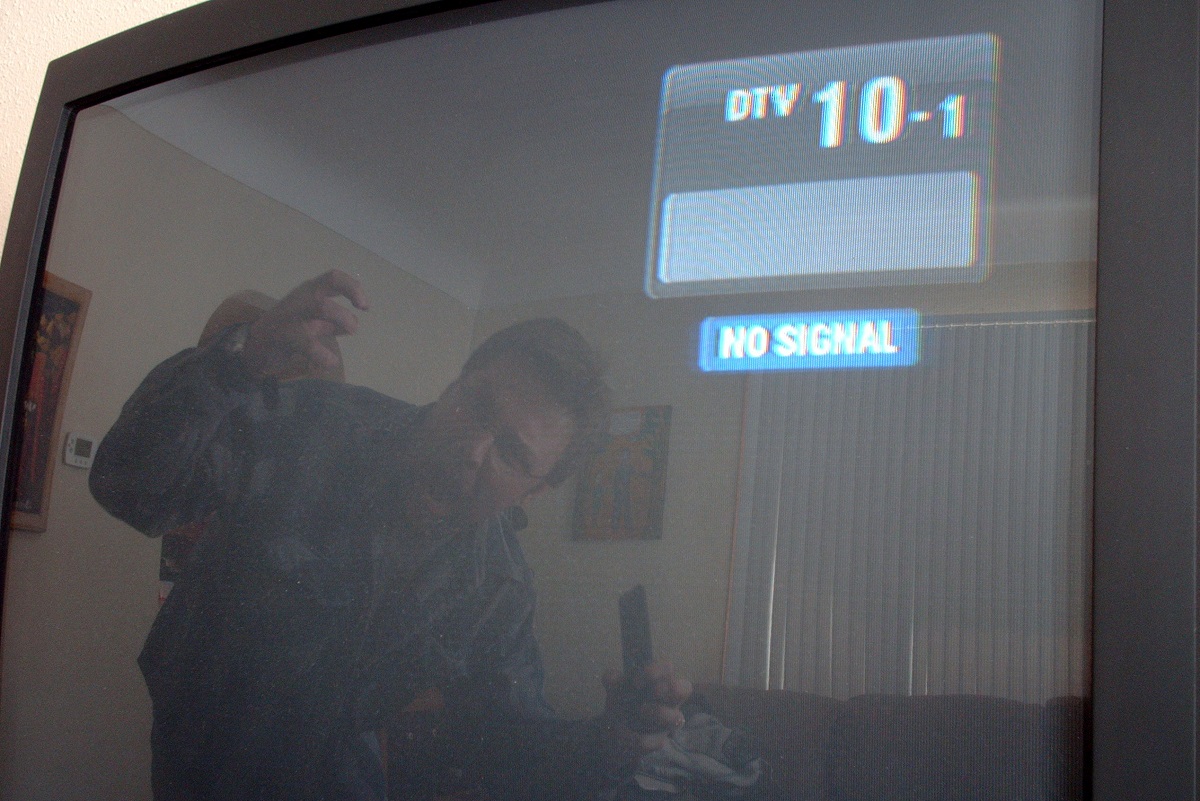 I think the first digital TV we bought lasted about four years, but we still have an old-school analog TV from the 1990s running in the basement with a converter box. It will probably outlive our next five digital TVs, but then again we’ll have to get rid of it when the converter box goes belly up, because converter boxes are probably already a thing of the past.

When we replaced the digital TV in our living room, the salesman at Best Buy recommended a set for us and I asked him to find the remote control for it, knowing that a smartly designed remote is about all I can ask for these days. He got it out and I started looking it over. “It doesn’t have a mute button,” I said. He took it back and stared at it a moment. “Yeah, I guess it doesn’t,” he said matter of factly. I couldn’t help popping off about it. “Mute is the most important button! The hell am I supposed to do, listen to a commercial like it’s 1978?”

I can’t figure out why so many remotes have all the buttons for picture adjustment in prominent spots, and then something as critical as mute gets left off or buried in the middle of buttons like “CCD” and “Aspect” — two things which I don’t even care to know what functions they serve. Do TV manufacturers think I adjust the color on my set every time I watch TV? My two digital TV remotes have 32 and 40 buttons on them, respectively. All I want is power, channel up, channel down, volume up, volume down, and a fat, inch-round-at-minimum mute button.

Within a year of the purchase of one of our digital TVs the channel up and down buttons just wore out. The volume buttons still work, but I have to pinch the remote with all my strength, like I’m trying to squeeze the life out of a tick. Eventually I emailed Polaroid seeking a replacement remote, and the results were predictable.

“We are sorry to hear you are experiencing issues with your product,” began the reply. “We are sorry to inform you that the unit you are inquiring is a long discontinued product model no longer supported. Parts, service and repairs are no longer available for your specific Polaroid product. We are sorry we are unable to assist you.”

If this television is “long discontinued,” it had to have been discontinued before it was built, because digital TVs didn’t exist a long time ago.

In response to Polaroid, all I could bring myself to write was: “I guess I shouldn’t be surprised that it’s discontinued.”

We still use this TV, but the channel is forever set at the local CBS affiliate, KBJR channel 6.2. Sure, I could use the number buttons to change the channel, but that would involve correctly hitting the correct sequence of numbers and a decimal in the dark. Remember, this TV is in the bedroom. It would be a hassle for me to get out of bed and turn the light on to see the buttons … and that would wake up my wife who would then eat my face. So the channel stays at 6.2.

For a long time we couldn’t get reception of WDIO’s channels in our bedroom. They might tune in now, but since I can’t change the channel I’ll never know. As it turns out, “We’re receptive” isn’t such a strange slogan to me anymore. It’s about the most I can hope for.

This week, Mary Reichert talks about how she stumbled into the art of felting and textiles. She's become passionate about...