Wunderbar: a new place to eat, stay and play in Grand Marais 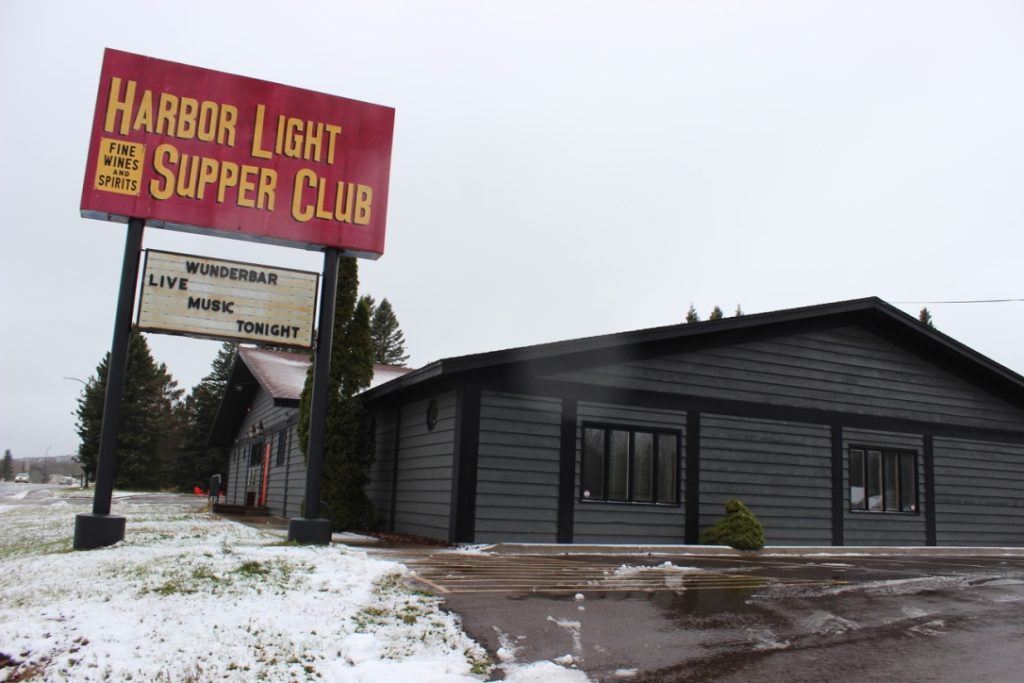 In late October, as many businesses in the remote community of Grand Marais were shuttering for the season, Wunderbar Eatery and Glampground was quietly making its debut.

Wunderbar occupies the former Harbor Light supper club, which has been closed for about five years. The building at 1615 Highway 61 W. dates back to 1930.

The unique new establishment held a soft opening the weekend of Oct. 20 and has been open on weekends since then. It features a bar and restaurant as well as a stage for music. An upscale campground with yurts and vintage camping trailers is in the works. The term “glampground” is a blend of the words glamour and campground to suggest a style of camping with amenities.

While it might seem like an odd business decision to open in the beginning of the off-season, the folks at Wunderbar are intentionally upending convention.

“We’re doing things differently here. There is no precedent for this,” says Jason Baumgarth, general manager.

Baumgarth says some area businesses have a tendency to get complacent rather than innovate. “They say, ‘In the summer, we’re going to do well. We don’t need to do anything additional. This is the way things have always been. Let’s just keep doing it this way.’”

Wunderbar owner Teri Downing concurs, noting she refuses to be stifled by a lack of openness to new ideas. “We’re not those people. We’re going to take it one step further because that’s where all the glory lies.” 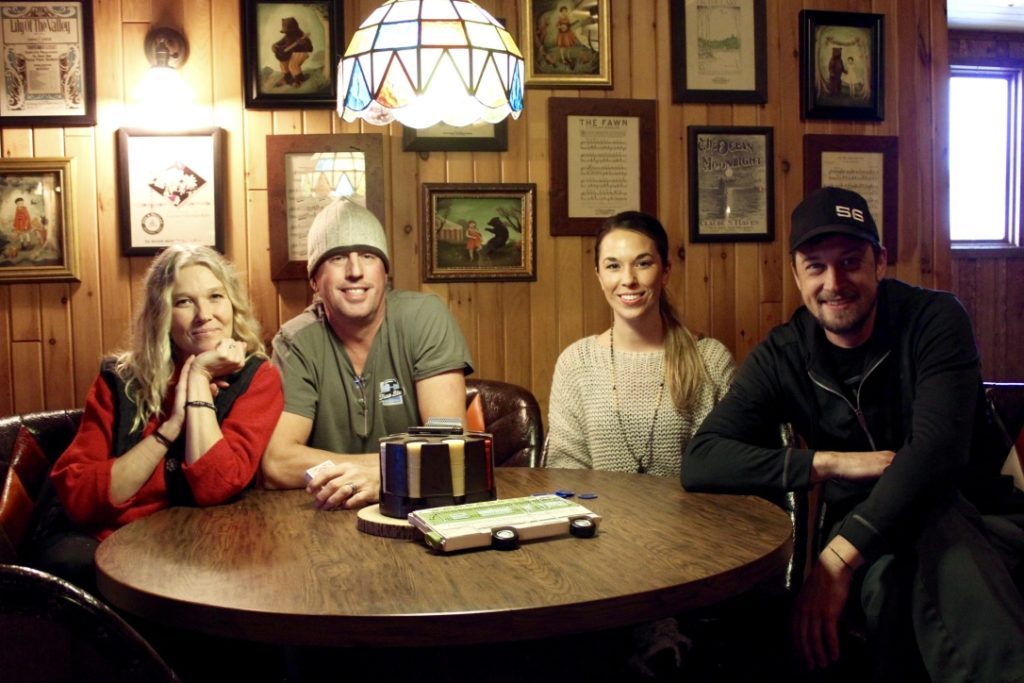 Teri Downing says opening Wunderbar is the culmination of many years of training. As she tells it, she’s been prepping for this role her whole life. At age 5, she got an avocado-green kitchen play set and a game of Monopoly for Christmas. After that, she constantly begged her siblings to play “restaurant.”

Her first real job as a server in a Hayward supper club solidified her desire to work in hospitality. “I learned the industry and I fell in love with it,” she says. “I fell in love with taking care of people and bringing people joy.”

After recognizing her calling, Downing moved to the Twin Cities and went on to work with some of the best chefs and restaurateurs in the business. She started at the Blue Plate Restaurant Company and later moved on to D’Amico, where she managed Gather, a chef-driven project involving large-scale pop-up events at venues like the Walker Art Center.

Then she spent time working with Lucia Watson, considered the Alice Waters of the Midwest because of her sustainable, farm-to-table approach. Later Downing managed Psycho Suzi’s Motor Lounge and worked with Leslie Bock to build Betty Danger’s Country Club, which boasts a Ferris wheel and mini golf course, from the ground up.

“That was a huge project of learning how to think outside the box — thinking big, thinking creatively,” says Downing.

More recently, Downing has been consulting and dreaming of opening her own place. For more than a decade, she has wanted to buy and revive the old Harbor Light restaurant. Her husband Chris has family ties to Grand Marais and the couple has frequently visited the area.

While vacationing in town several months ago, Teri and Chris separately noticed a “for sale” sign on the Harbor Light building. Each snapped photos of the sign to show the other. They took this serendipity as a sign, and moved quickly to make an offer, which was accepted.

Some major renovations were required, including a new roof for the 8,400-square-foot building. Carpeting was pulled and floors were refinished. A fresh coat of paint was applied to both the exterior and interior. After about three months of hard work, the business was ready to open. 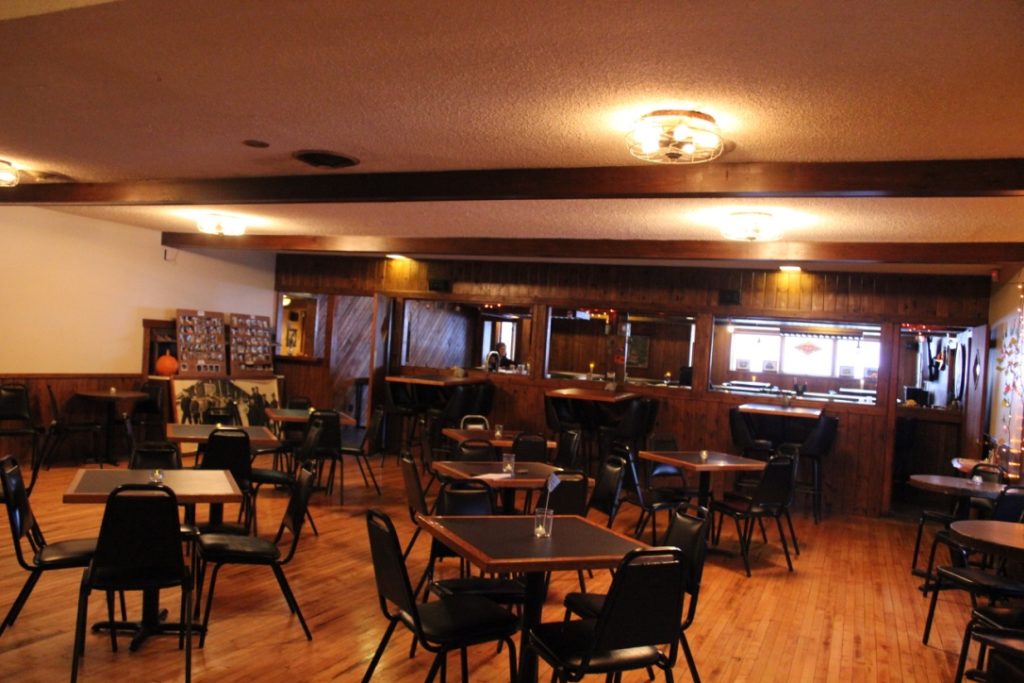 The initial plan was for a Thanksgiving opening. But the community’s enthusiasm helped pushed Wunderbar’s timeline forward. People kept stopping in, asking if they were open, so they decided to open once the liquor license was in place, even though it’s still a work in progress.

Wunderbar translates to “wonderful” in German. The proprietors aim to elicit a sense of wonder in their customers. “It’s all about play and it’s all about fun,” says Downing. “I think that this world has forgotten how to play. And so, that’s what we want to bring. Be as silly as you want to be. Come in as you are. Bring your kids and families. We’re throwing the rules out the window.”

Though Downing has a wealth of experience in upscale restaurants, she’s aiming for a much more down-to-earth ambiance with Wunderbar. “It’s our home away from home. Everybody that’s in here is our family. We want it to be that dive bar feel.”

Patrons are welcomed through a bright orange entrance door, flanked by colorful chalkboard messages like the Wunderbar mantra: “Let’s Play!” At first glance, the interior seems standard for rural Minnesota, with utilitarian furniture and dark wood paneling. But the décor is thoughtfully arranged and decidedly whimsical. 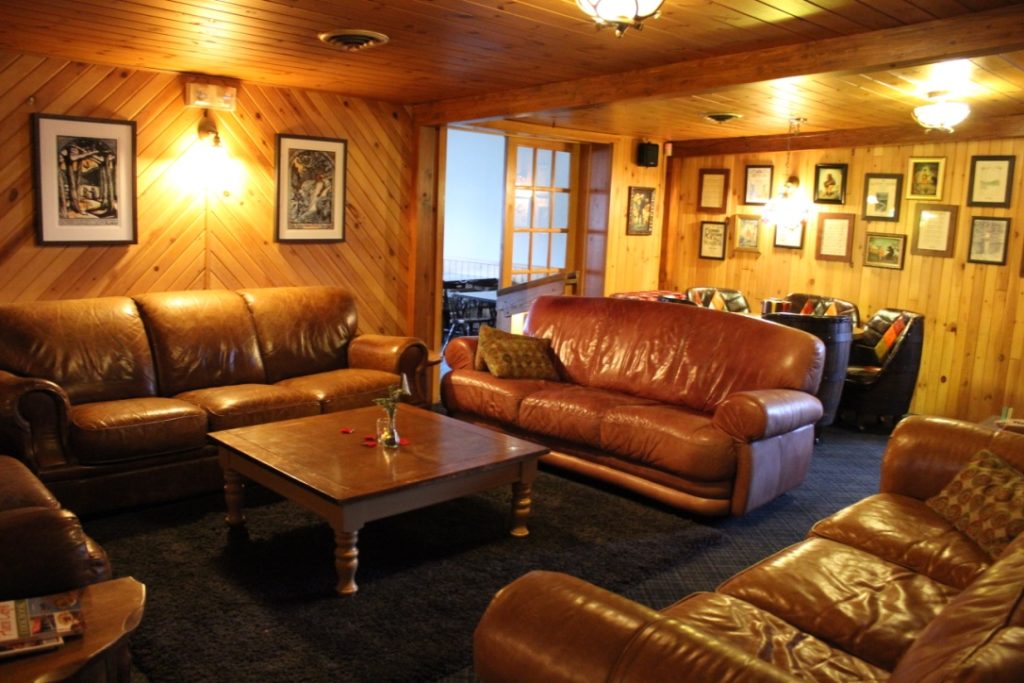 “We’re all about repurposing and not purchasing here. And everything here has a story and a meaning,” says Downing.

Tree slices artfully embellish the stage backdrop. A vintage jukebox plays 45s in the far corner of the bar. A lounge area off the bar features oversized leather couches and a retro game table with chairs made from barrels.

Even the bathroom stalls are festive, featuring graffiti by artist Jeff Niesen with fun themes from Where the Wild Things Are and Twin Peaks. 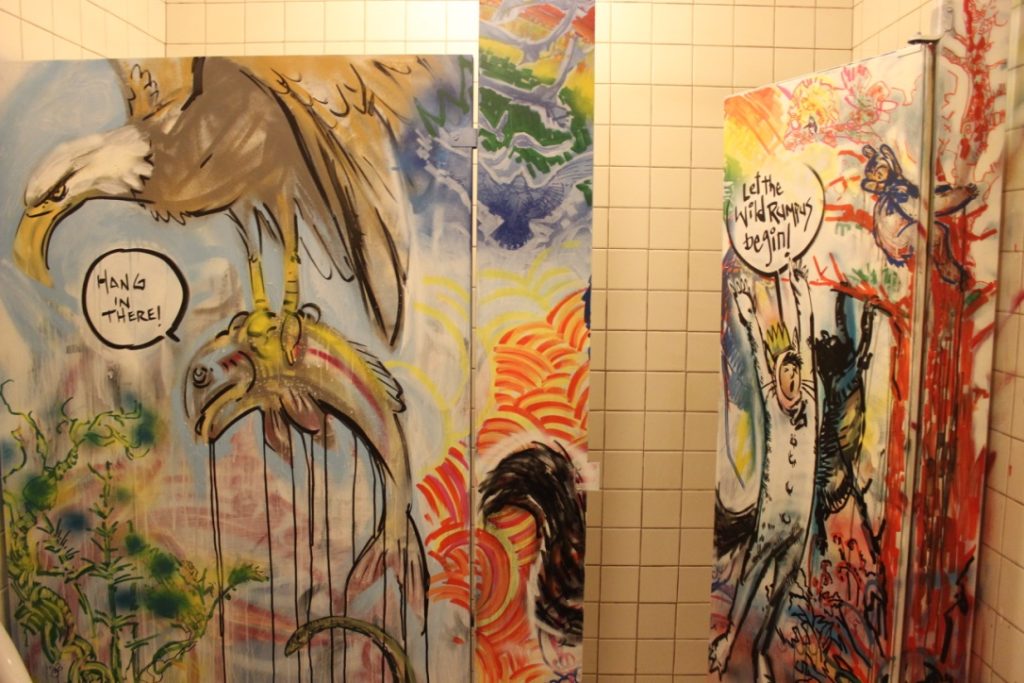 Wunderbar sits on four acres of land, which will be well utilized. A wooded area behind the restaurant contains three paths that were recently sculpted by Steve Abbot, a visiting naturalist.

The paths will eventually lead to five yurts that can be rented year-round. The circle drive adjacent to the parking lot will be dotted with vintage campers, each restored with its own unique theme. 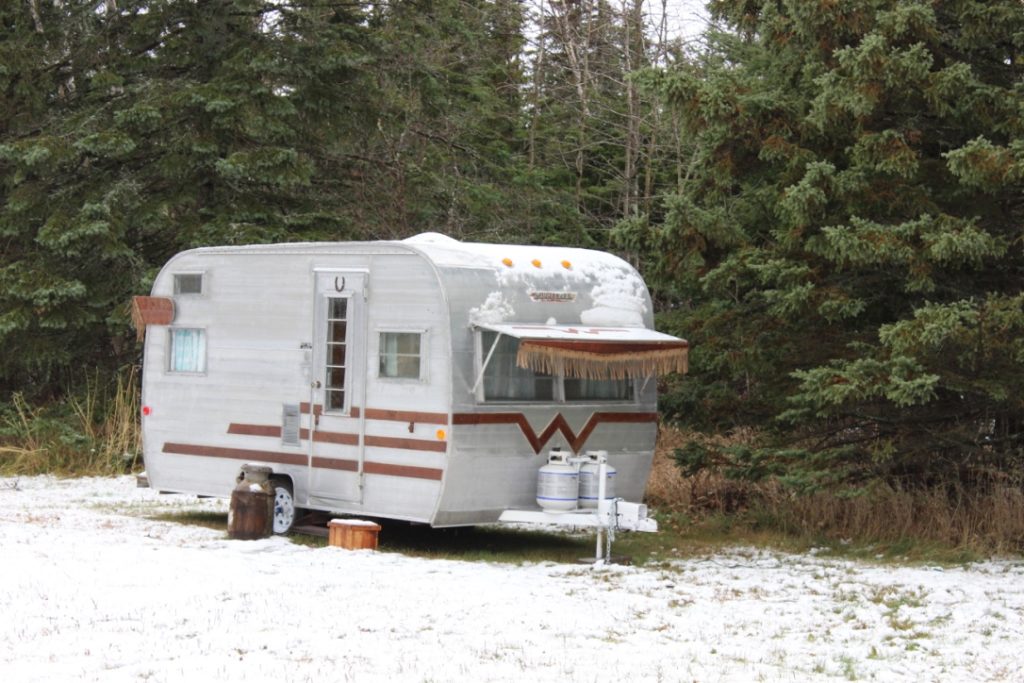 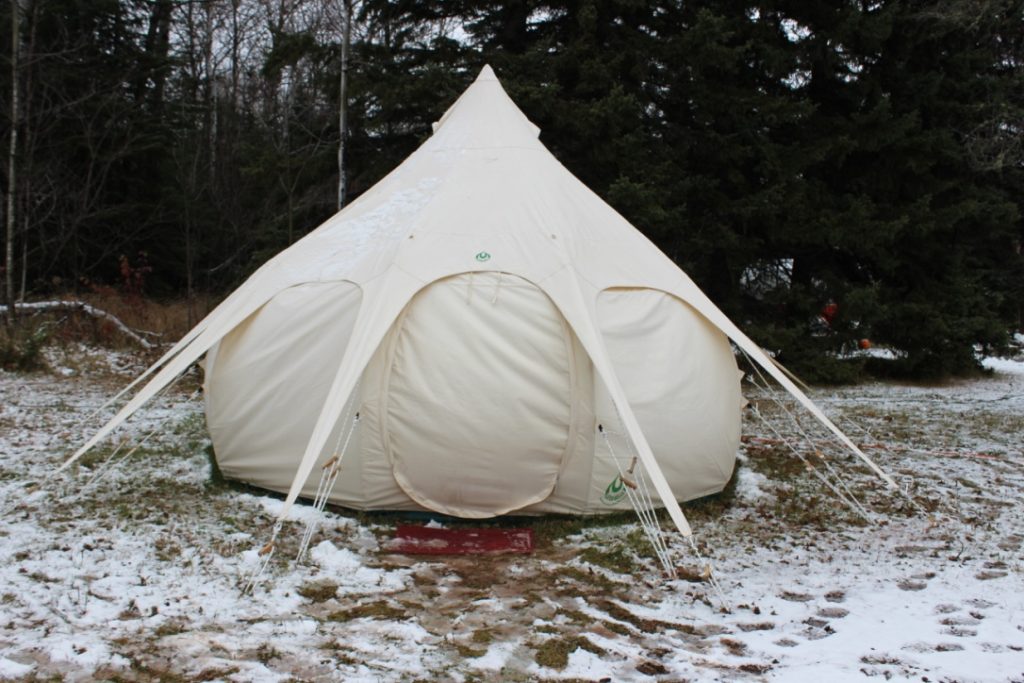 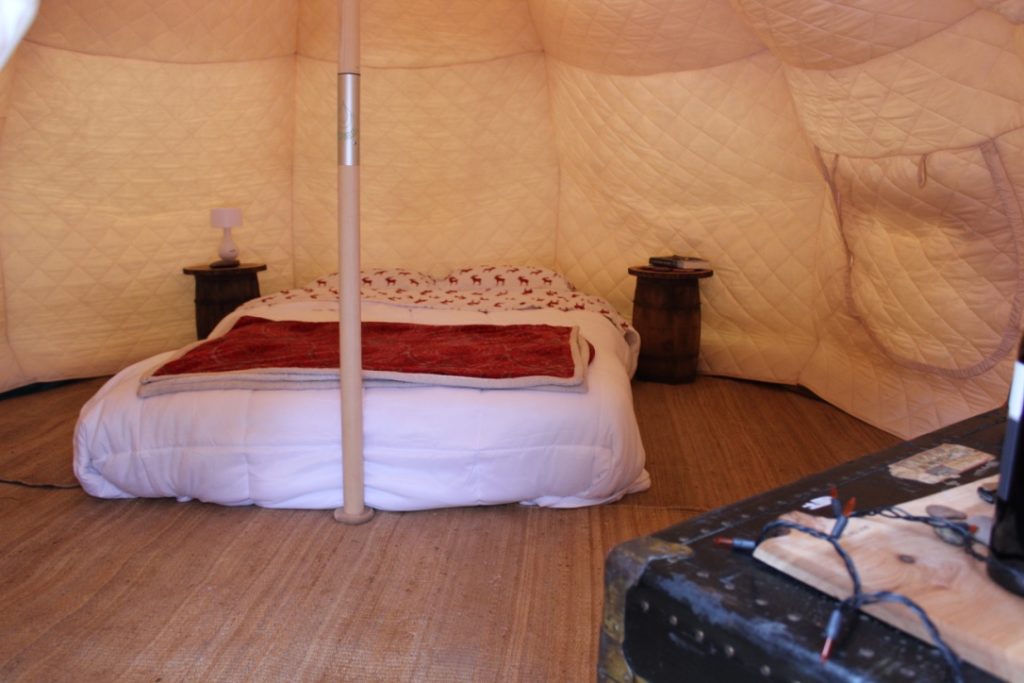 For now, the restaurant has a limited menu. Recent offerings included grilled hot dogs and burgers made from Peterson Craftsman Meats (Osceola, Wis.) as well as house made soup, salad and snack trays with items like cheese, meat, beets and locally pickled Northern pike. Sundays feature a Bloody Mary bar and brunch.

The bar has a range of libations to please every palate. From cheap beer and rail booze to craft brews and upscale Minnesota-made spirit brands like Vikre and Tattersall. Baumgarth says the plan is to offer fun and exciting wines from different regions. Thirty different wines will be available by the bottle for $30. 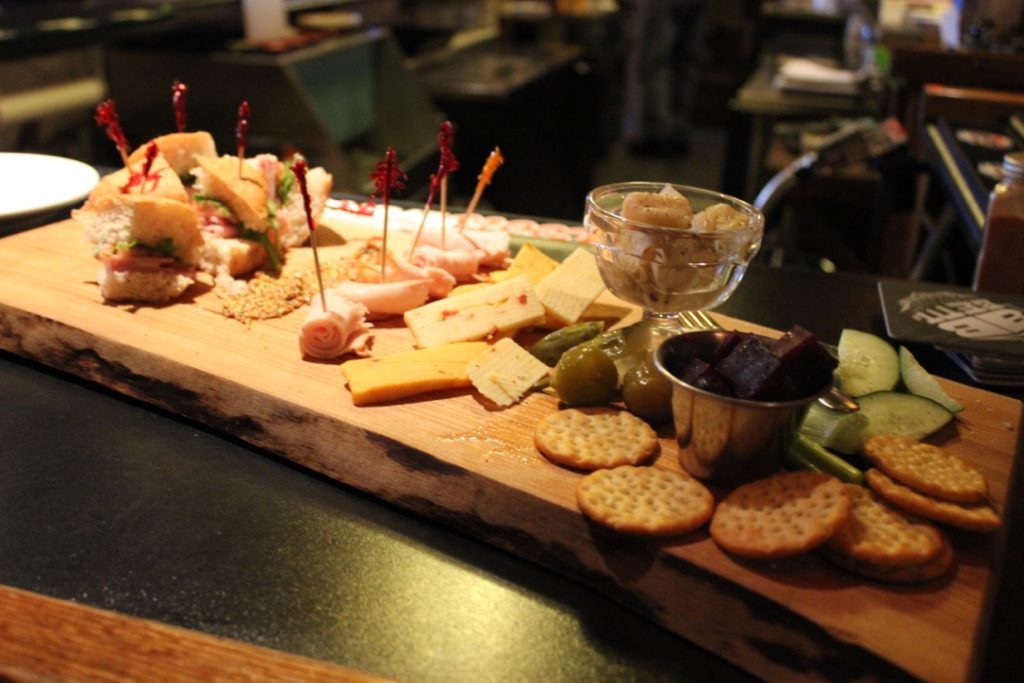 In addition to the bar and dining area, which overlooks the stage, there’s a comfy lounge and an outdoor patio. A larger room in the rear of the building accommodates 100 seated and can be rented for events, which are already booked into July. Overall the building has a capacity of 275 people.

An old icehouse sits behind the building. Back in the day, it stored ice for all of Grand Marais. The historic space with walls that are two-feet thick will eventually be turned into a modern-day speakeasy where customers can enjoy high-end whiskeys and wines. It’s conveniently located off a snowmobile trail.

Wunderbar intends to host fun events throughout the winter for the whole family. Saturday morning cartoon parties, ice carving, winter Olympics and a hotdish hoedown are just several of the creative ideas they’re tossing around to help people embrace the season. “The locals crave that kind of stuff. They like diversity and new things,” says Chris Downing.

The idea is to also give tourists more of a reason to visit Grand Marais in the colder months. “Everybody’s busy when it’s summer and there are tourists in town,” he says. “But our goal is to get them from Lutsen in the winter, because literally, there’s as much tourist money in Cook County in winter as there is in summer. It’s just all at Lutsen.”

Wunderbar will host live music on Fridays and Saturdays as well as Sundays during brunch. Although local musicians have already been tapped to play, the goal is to have a venue that is more akin to Papa Charlie’s, where acts from farther afield are also drawn in. Musicians from Duluth, the Twin Cities and as far away as Kansas City are being scheduled.

“We want to become the First Avenue of the Northeast,” says Teri Downing. 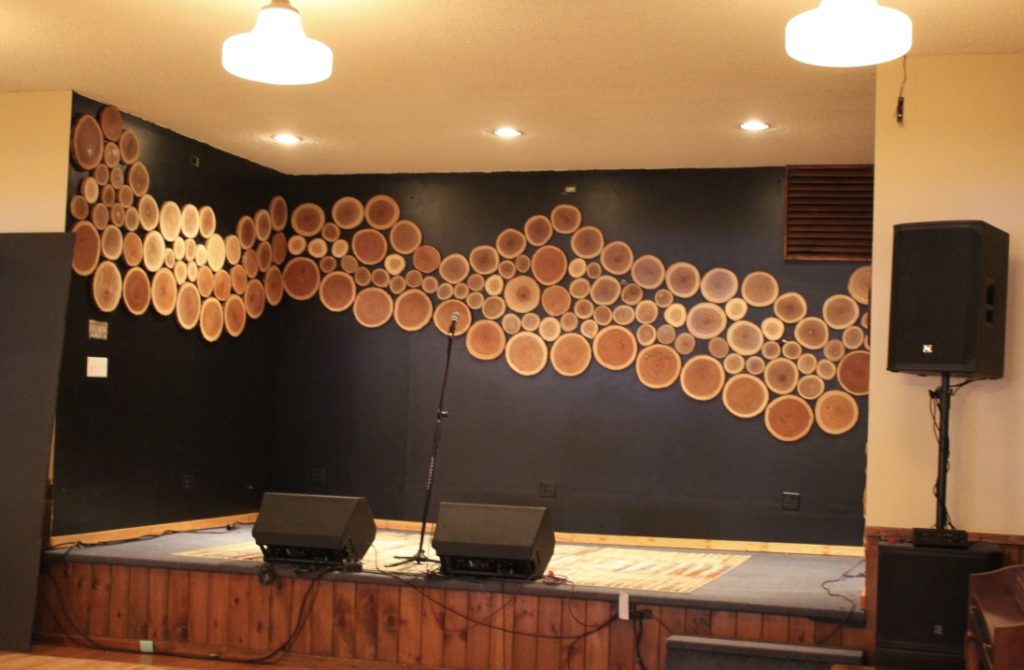 Locals and tourists alike are embracing the Wunderbar. Downing says there’s an energy developing around the place she couldn’t have anticipated, including numerous people putting in volunteer hours to help realize the vision. “People want to give their time and energy to it. I’m honored and humbled by that. It’s magic.”

I'm cleaning out my hard drive in preparation for a sabbatical. So here are some videos of Carla Stetson, then...