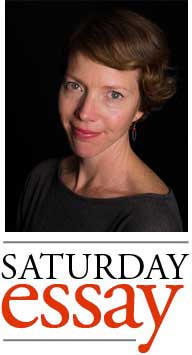 When I moved to Duluth from San Francisco in July 2004, my fiancé Jeremy and I rented a first-floor apartment in a 100-year-old house on Third Street. The elegant flight of stairs inside our foyer was an egress for the upstairs apartment, so we had to keep the door between us unlocked. Jeremy didn’t seem worried; he had been living in Ely, where everyone leaves their keys in the ignition. Turned out our upstairs neighbors were a couple of women who rescued abandoned baby animals and nursed them with eye droppers. I stopped worrying about it, too.

From our back porch we grilled brats, drank Lake Superior Special Ale, and gazed at the brewing company’s namesake. I had never had a porch, a grill, or a view this pretty. As I looked across the blue water I felt my shoulders relax. I felt off the map, like a witness relocated: no one from my past life could find me here unless I wanted them to.

Then one morning in the window of Positively 3rd Street Bakery I saw someone from my past on a poster for the Bayfront Blues Festival: Koko Taylor. Now I was old enough to see her sing. The last time I was not, and that was a long time ago.

My parents never missed out on nightlife, and they never paid for a sitter, especially when we were traveling. So as a kid I often fell asleep on coats at a house party or across my mother’s lap at a bar. Often the music was played by ugly bearded guys and the conversation bored me, so I drew pictures on coasters and checked out the bathroom a million times.

When I was about ten we were on a ski weekend in Durango. My parents really wanted to go to this one club. I watched my step father argue with the doorman and then slip a twenty into his pocket. The doorman led us inside to a round table with a wrap-around white leather booth right up next to the stage. It was nothing like the places I was used to: in this one there was a crystal disco ball that sent tiny rainbows swirling around, and a full brass band of dark-skinned men in tuxedos. Out came a curvy woman in a tight sequin gown. Her red glossy lips and white teeth caught the light when she bellowed into the silver microphone. She was singing the kind of song I liked to listen to on my own record player. She was straight off of Solid Gold, but earthier, darker, and definitely sweatier. Then she threw herself onto the floor moaning, writhing, and belting her heart out. I was wide awake now: this was IT!

Suddenly, the singer met my eyes and raised her hand, “Hold on, hold on,” she said. The band stopped playing. She pointed to our table, and her spotlight moved onto us. She pointed at my mother: “You brought a child into MY show? WHO let you bring a child into my show?” Then her eyes moved to me and she advanced. She stretched out her long-red-nailed hand and cupped the back of my head. She shoved my nose into the depths of her cleavage and then she rocked me back and forth: “Oh, baby, you must think I’m a dirty old woman — please forgive me, baby! Your momma needs to take you home where you belong, safe in bed!” My face was soaked and I realized I might feel embarrassed. Truth was, I had no idea what she was singing about. I just knew I loved it. Then she addressed the whole club: “We ain’t playin’ ’til these folks leave.” I didn’t want to leave, but my mother couldn’t get out of there fast enough. She was mad at her husband for weeks.

I never did go see Koko Taylor play at the Blues Fest. I can’t remember why, exactly, but if I had known it would be my last chance, I would have. A few weeks later I met the music editor for Duluth’s weekly Ripsaw newspaper. She had just interviewed Koko in her hotel room and said she was really nice. That was the last word I’d choose to describe the blues heavy I remembered.

When Koko died in 2007 I became the mother she wanted my mother to be. My two daughters have never had a joint accidentally passed to them, or run a tab of Shirley Temples. I am not trying to correct my childhood: I’m just a homebody. I hope that someday they, too, will get to see a dirty old woman pour out her soul like sugar on the floor.

Rob Adams at the DAI and North Korea

Imagine playing a game of Battleship with an estranged uncle. Let's call him "Sam."