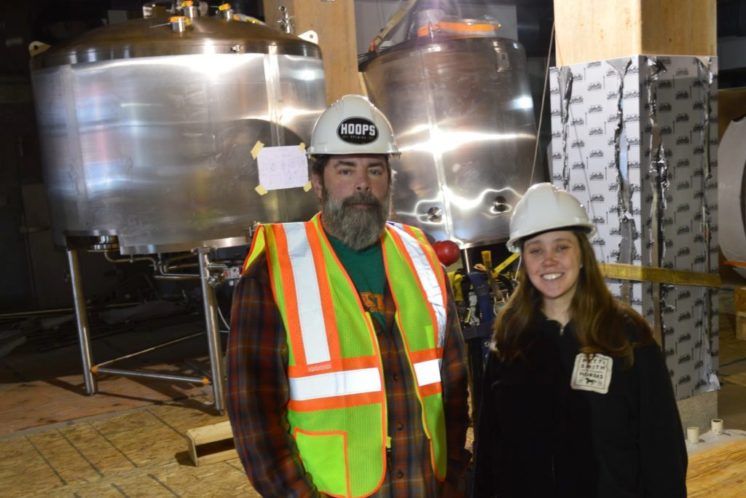 Seven stainless steel tanks and a catwalk preassembled with pipes and pumps were lifted off flatbed trucks and squeezed through the stone doorway of a former Canal Park restaurant on March 21.

The equipment, including four huge fermentors and two beer tanks, was hauled inside on heavy duty carts and laid on a new custom-built floor like tipped-over beer bottles. The massive move, which stopped traffic outside 325 S. Lake Ave., was a major step in plans by longtime Duluth brewmaster Dave Hoops to open Hoops Brewing, a beer hall that will match the largest in Minnesota.

“We’ve got quite a project going,” said Hoops as he led a visitor into a 9,000-square-foot space that housed the Timber Lodge Steakhouse for two decades. The room is across a hallway from the Suites Hotel at Waterfront Plaza, a 128-room facility that occupies the majority of the historic Marshall-Wells hardware building. Upper-floor offices and condominiums fill the remainder. Hoops Brewing will be located in the Waterfront Plaza, also known as “the Meirhoff building,” which was built in 1900 as the Marshall-Wells hardware headquarters.

Hoops Brewing head brewer Melissa Rainville also joined the tour. The space was strewn with ladders, hoses, plastic walls and plywood sheets. A power drill roared in the background. Workers from a Wisconsin firm specializing in dairy construction strung up a chain and prepared to lift a shiny, silver tank into position.

“This is so exciting,” said Rainville. “My tanks are going to be standing up soon.”

When complete and open in late May or early June, Hoops Brewing will feature an operation capable of making between 60 to 80 different styles of beer a year, a 270-seat hall with views of the William A. Irvin museum ship and employ about 15-20 workers. There is also room to expand production capacity.

Hoops said his establishment will fit well with surrounding businesses. The brewery does not have a kitchen, but will encourage patrons to bring in or order food from nearby restaurants.

“Imagine Red Lobster hosting a claw boil in the middle of this room,” he said. “These are the kinds of things we want to do here.”

“I think it’s going to be a big boost not only to Canal Park but to Duluth in general,” he said. “Dave Hoops has done nothing but great things in the industry … He’s been successful at anything he’s done.”

Gustafson said Duluth has become well known as a “beer city” because of people like Hoops and Rainville. The number of Duluth craft brewers is growing because each have a good product and a unique plan, he said.

“They each have their own vibe and feel,” he said. “It’s great to see the industry thriving.”

Hoops has been involved in the beer and wine industry for three decades. He directed the Fitger’s Brewhouse kettles for 17 years before leaving with Tim Nelson to establish Bev-Craft, a craft beer consulting firm in Superior. Hoops said his beer hall will bring something new to Canal Park.

“This is going to be a destination beer hall,” he said. “The likes of which have never been seen in this town.” Hoops Brewing Head Brewer Melissa Rainville stirred the hops at Fitger’s Brewhouse for three years before signing on to the Hoops Brewing project.

And it will be up to Rainville to keep the taps flowing and beers on all the tables. Rainville studied under Hoops at Fitger’s Brewhouse for three years and will patrol the catwalks monitoring temperatures and mixes. Under the Hoops Brewing open floor plan, patrons will see Rainville in action.

“Everything is going to be behind glass walls, so it’s kind of like being a fish in an aquarium,” she said. “I’ll be on display, but that’s OK, I’m used to getting stared at while I’m working.”

Rainville grew up in Coon Rapids, fell in love with brewing during a stint at St. Paul’s Flat Earth Brewing and applied for a Fitger’s Brewhouse position a few years ago. She didn’t get the job but impressed management and stayed in touch as an apprentice. When the job reopened she was hired immediately and has been a big player in the Duluth beer scene ever since.

At Hoops Brewing, Rainville will develop and brew a wide range of beer styles. She hopes to have between 15 and 30 different taps available at all times. The brewery will focus on serving the room; only a very small amount of beer will be packaged and sold off-site in local liquor stores or taverns.

Brewing a variety of beers in quantities large enough to distribute — like Bent Paddle or Castle Danger — is not part of the Hoops Brewing business model, she said. “I don’t want to be working 24-hour shifts.”

As Hoops and Rainville posed for a picture near a tank capable of mixing 4,500 pounds of mash, a construction worker announced the arrival of more equipment. Hoops ran off to direct the operation.

Rainville watched workers lift another brew kettle the size of an Apollo space craft into position.

“It’s going to be a big place,” she said. “I’m hoping I can make enough beer to keep up with everyone.”

The Duluth Superior Film Festival is taking a call for entry for all forms of film presentation. No specific parameters....