When principals tried to run Mötley Crüe out of Duluth 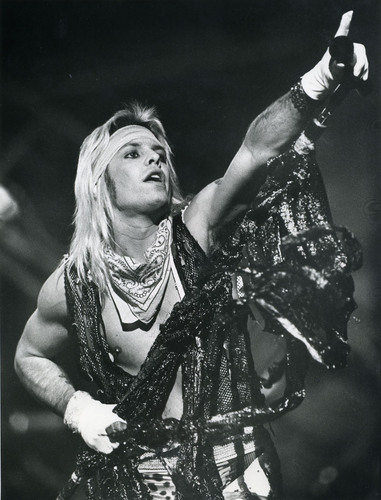 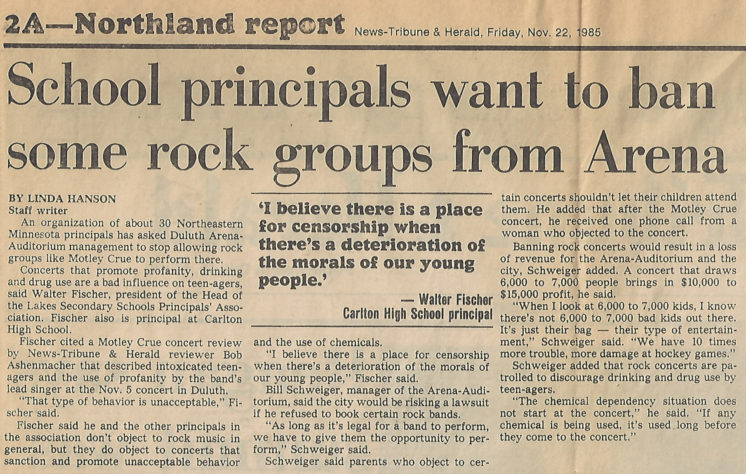 Oh, the profanity! Mötley Crüe got Duluth-area principals’ undies in a bunch back in 1985. Attempts to ban the Los Angeles-based glam metal band went nowhere. Mötley Crüe returned to Duluth for two more concerts, one in 1990 and another in 1998.

Below is the text from the 1985 Duluth News-Tribune & Herald article.

An organization of about 30 Northeastern Minnesota principals has asked Duluth Arena-Auditorium management to stop allowing rock groups like Motley Crue to perform there.

Concerts that promote profanity, drinking and drug use are a bad influence on teen-agers, said Walter Fischer, president of the Head of the Lakes Secondary Schools Principals’ Association. Fischer also is principal at Carlton High School.

Fischer cited a Motley Crue concert review by News-Tribune & Herald reviewer Bob Ashenmacher that described intoxicated teenagers and the use of profanity by the band’s lead singer at the Nov. 5 concert in Duluth.

“That type of behavior is unacceptable,” Fischer said.

Fischer said he and the other principals in the association don’t object to rock music in general, but they do object to concerts that sanction and promote unacceptable behavior and the use of chemicals.

“I believe there is a place for censorship when there’s a deterioration of the morals of our young people,” Fischer said.

Bill Schweiger, manager of the Arena-Auditorium, said the city would be risking a lawsuit if he refused to book certain rock bands.

“As long as it’s legal for a band to perform, we have to give them the opportunity to perform,” Schweiger said.

Schweiger said parents who object to certain concerts shouldn’t let their children attend them. He added that after the Motley Crue concert, he received one phone call from a woman who objected to the concert.

Schweiger added that rock concerts are patrolled to discourage drinking and drug use by teen-agers.
“The chemical dependency situation does not start at the concert,” he said. “If any chemical is being used, it’s used long before they come to the concert.”