The American Wrestling Association brought some of its finest grapplers to Duluth 30 years ago, as the newspaper ad above attests. It was six months before the World Wrestling Federation juggernaut brought a series of shows to the Duluth Arena. The AWA, of course, was a smaller promotion and held its card in the Duluth Auditorium, with the ring placed on the stage the Duluth Superior Symphony Orchestra typically occupies.

The opening bout featured a legend in the sport, Billy Robinson, though he was a bit past his prime. Robinson defeated a rookie wrestler named Brian Knobbs, who back then was forming a tag team with Jerry Saganowich that would go on to win both the NWA and WWF tag team championships in the early 1990s.

Sheik Adnan Al-Kaissie defeated Kim Yates in the second match. Yates was a jobber who was announced as being “from Superior, Wisconsin.”

Curt Hennig defeated the Super Ninja in the third match. Super Ninja’s AWA stardom was brief; one month after losing to Hennig in Duluth he found himself fighting for the AWA World Heavyweight Championship against Nick Bockwinkel, a match he lost by disqualification. A few months later he left the territory. Super Ninja was originally booked to wrestle Billy Robinson in the show’s opening match, but was moved up on the bill when Larry Zbyszko failed to show up for his scheduled match with Hennig.

Another no-show was Leon White. The former NFL football player who went on to pro wrestling fame as the character Big Van Vadar was advertised to wrestle on the Duluth card but was replaced by Buck “Rock ‘n’ Roll” Zumhofe.

Boris Zhukov defeated Zumhofe in a battle of terminally middle-card homophones. Zhukov went on to win the AWA World Tag Team Championship with Soldat Ustinov and eventually moved to the WWF to team with Nikolai Volkoff to become the Bolsheviks. Zumhofe, on the other hand, went on to become famous for criminal sexual conduct.

Before Scott Hall became Razor Ramon and went on to form the Outsiders, join the N.W.O. and win numerous individual and tag team titles, he was simply “Big” Scott Hall of the AWA. At the time of his match in Duluth he had already won and lost the AWA World Tag Team Championship with Curt Hennig. “The Mercenary from South Africa” Col. DeBeers had interfered in the match where Hall and Hennig lost the belts, and the feud carried on for months. Hall defeated DeBeers in Duluth.

Before Shawn Michaels became “The Heartbreak Kid” and won the WWF/WWE World Heavyweight Championship four times, he was a tag team wrestler partnered with Marty Jannetty. Michaels and Jannetty were 22 and 26 years old, respectively, when they came to Duluth as the Midnight Rockers. The hot new tag team was in a long-running feud with “Playboy” Buddy Rose and “Pretty Boy” Doug Somers, who earlier in the year defeated Hennig and Hall for the AWA World Tag Team Championship. The Rockers signed autographs during intermission at the Duluth Auditorium, then defeated the champions … in a non-title bout. They would go on to win the belts two months later. The main event of the evening was billed as a “12-man Battle Royale,” but it actually involved 13 men and one woman. AWA World Women’s Champion Sharri Martel was supposed to defend her title against Despina Montages in Duluth, but instead ended up in a battle royale with all the men who were booked on the card. Curt Hennig was the last man standing, winning the main event. Hennig would become the AWA World Heavyweight Champion six months later, defeating Nick Bockwinkel. He went on to become “Mr. Perfect” in the WWF/WWE, winning numerous championships. Sadly, he died of acute cocaine intoxication at the age of 44.

This event was the last time the AWA held a card in Duluth. Five years later, owner Verne Gagne filed for bankruptcy, ending the business after three decades as one of America’s top wrestling promotions. 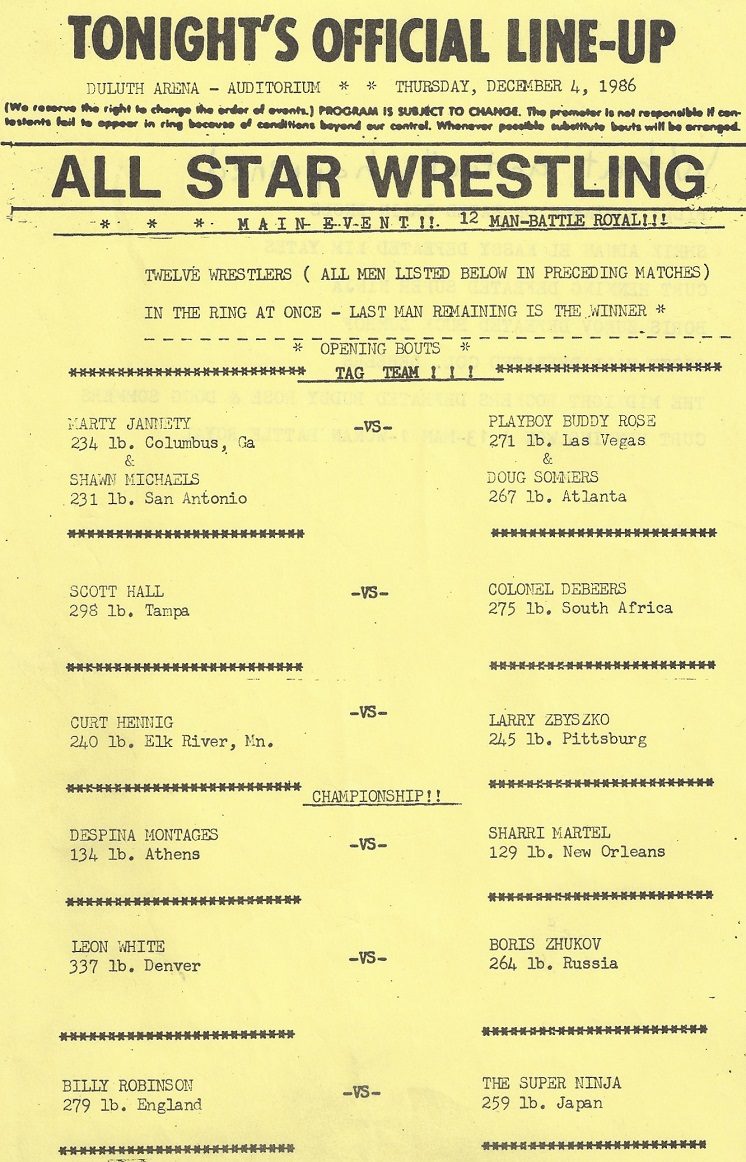