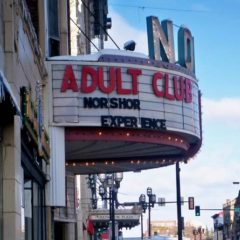 The NorShor Theatre first hosted exotic dancers on May 24, 2006, with two simple words on the marquee: “Live Girls.” Later, the words “Adult Club” would appear above the theater’s new business name: the NorShor Experience.

The NorShor had been closed for 10 months due to fire code violations before the strip club moved in, except for one night, May 4, when Duluth’s fire marshall allowed Low to perform during the 2006 Homegrown Music Festival.

Aurora native Jim Gradishar, owner of the nearby Wabasha Book store and the strip club Fuzzy’s Place, was proprietor of the NorShor Experience, which featured a few concerts and midget wrestling cards in addition to strippers. During the club’s four-year run, neighboring business owners and citizens complained, and legal battles and fire-code issues stalled operations at times.

Gladishar received a probationary sentence in St. Louis County District Court for carrying a firearm in the NorShor while under the influence of alcohol in 2009. After that he fell into depression and took his own life in 2010 at the age of 47.

The NorShor Experience stayed in business for a few more weeks under the management of Tina Jackson, but in April 2010 Duluth Mayor Don Ness announced the Duluth Economic Development Authority, the city’s economic development arm, would purchase the NorShor Theatre and Temple Opera Block from owner Eric Ringsred for $2.3 million. Six years later, a $30.5 million renovation is poised to begin. The deal involves DEDA handing over ownership to developer George Sherman’s company, Sherman Associates, and the city providing $2.2 million in tax-increment financing. The nonprofit Duluth Playhouse will operate the theater and eventually take over ownership. Weird historical coincidence: The same day “Live Girls” went up on the NorShor marquee, the Hip Hop Candy Shop sign went up at 105 W. Fourth St. Owner James Redd was arrested later that year for criminal sexual conduct. He was sentenced to 98 months in prison. He also had multiple arrests for selling crack and possessing marijuana.

What local restaurant will be the Spirit Room's successor as Best New Restaurant? You tell us. Last week we compiled...