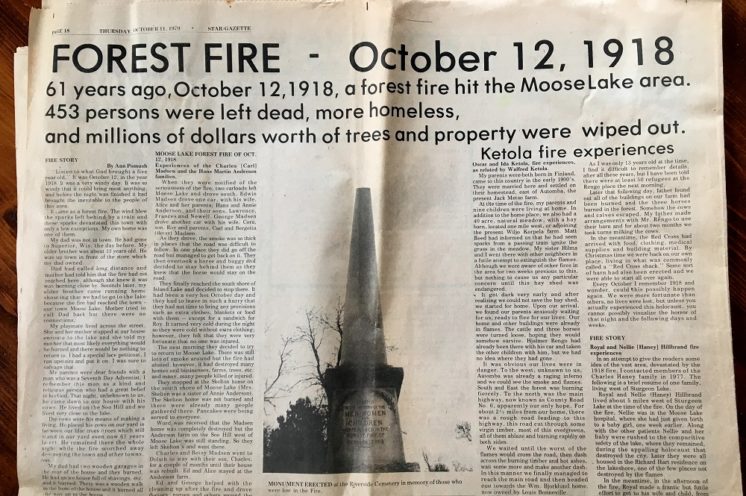 The subject of the 1918 forest fire in Carlton County came up in the “Postcards from the Swinging Bridge at Jay Cooke State Park” post a few weeks ago. Since I have kin from that area it wasn’t terribly surprising to find a fire retrospective from the Oct. 14, 1979 Moose Lake Star-Gazette in the family archive.

The feature includes four stories from different perspectives, and the second story is the experience of my great grandparents, Hans and Annie Anderson. This is quite the double coincidence, since I wasn’t looking for this old newspaper — I found it randomly with a bunch of old papers (JFK assassination, etc.) — and had no idea my great grandparents were mentioned until I started reading.

So here’s the story …

When they were notified of the seriousness of the fire, two carloads left Moose Lake and drove south. Edwin Madsen drove one car, with his wife, Alice and her parents. Hans and Annie Anderson, and their sons, Lawrence, Frances and Newell. George Madsen drove another car with his wife, Cora, son, Roy and parents, Carl Bergetta (Betsy) Madsen.

As they drove, the smoke was so thick in places that the road was difficult to follow. In one place they did go off the road but managed to get back on it. They then overtook a horse and buggy and decided to stay behind them as they knew that the horse would stay on the road.

They finally reached the south shore of Island Lake and decided to stop there. It had been a very hot October day and they had to leave in such a hurry that they had not time to bring any provisions such as extra clothes, blankets or food with them — except for a sandwich for Roy. It turned very cold during the night so they were cold without extra clothing: however, they felt that they were very fortunate that no one was injured

The next morning they decided to try to return to Moose Lake. There was still lots of smoke around but the fire had abated: however, it had destroyed many home and businesses, farms, trees, etc. and many, many people killed or injured.

They stopped at the Skelton home on the south shore of Moose Lake (Mrs. Skelton was a sister of Annie Anderson). The Skelton home was not burned and there were already many people gathered there. Pancakes were being served to everyone.

Word was received that the Madsen home was completely destroyed but the Anderson farm on the Soo Hill west of Moose Lake was still standing. So they left Skelton’s and went there.

Charles and Betsy Madsen went to Duluth to stay with their son, Charles, for a couple of months until their house was rebuilt. Ed and Alice stayed at the Anderson farm.

Ed and George helped with the cleaning up after the fire and drove doctors, nurses and others around the country.

The fire was a very frightening experience for these people: however, they were one of the few very fortunate families in which there were no injuries or loss of life.

One might not expect the food served at a nondescript roadhouse six miles south of Superior to be anything special,...