Those familiar with shopping at the co-op’s Hillside location at 610 E. Fourth St. can expect similar whole, organic, local and regional food offerings at the West Duluth store, plus an expanded deli area with hot and cold grab-and-go foods.

“The look is consistent,” she says. “People will feel it’s familiar even though the space has been constructed a bit differently.” 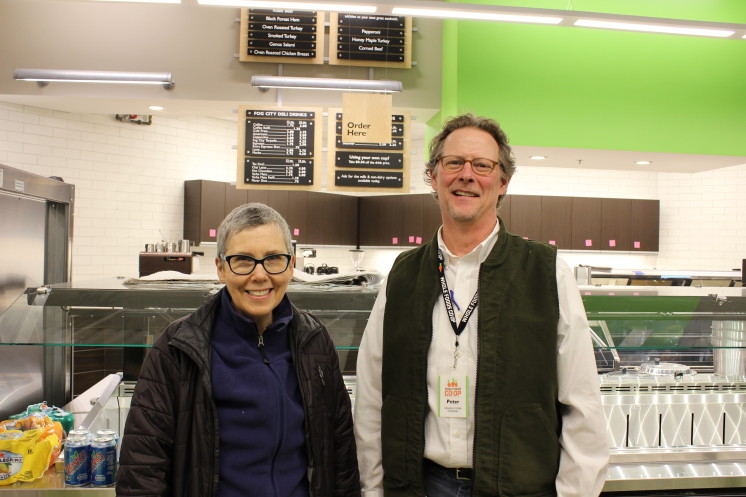 Like the Hillside location, the Denfeld store has a classroom and kitchen, which will double the amount of educational and cooking classes the co-op can offer. Classes are scheduled to start in April at the new store.

Local architecture firm LHB designed the building, which is Leadership in Energy and Environmental Design certified. LEED-certified buildings meet a set of standards emphasizing efficient and responsible use of energy and resources. This wasn’t the co-op’s first foray into green building; the Hillside location became the first LEED-certified cooperative in the country, and first LEED building in Duluth, in 2006.

Growing revenue and membership demand led to the decision to open a second location. The co-op board approved the initial planning for a new store in June 2012, but when the Hillside location sustained damage from a flood just days later, the process was put on hold.

The West Duluth location was determined after a lengthy process that included a feasibility study and ownership poll. Plans were made public in 2014, with the intention of opening in 2015. Soil remediation was required before construction could begin because the site had been used as a gas station prior to its years as a bus station. Delays in financing and construction followed.

Super One Foods is the only other full-service grocery store in the vicinity. The Denfeld Super Valu store near the high school closed in 2001 and was replaced with a Walgreens.

A 2011 UMD study characterized Lincoln Park / West End, the neighborhood directly northeast of West Duluth, as a “food desert” due to its limited access to healthy and affordable food. Wade says there’s a lot of excitement in the area around having the co-op as an additional shopping option.

This isn’t the first time the co-op catered to customers on the west side of town. Some might remember the West End Co-op at 2020 W. Superior St. Whole Foods’ first attempt at a second location was short-lived, operating from 1981 to ’83. Co-op General Manager Sharon Murphy says not enough planning went into that initial attempt to make a second location successful.

The co-op has come a long way since then. Founded in 1970 as the Whole Foods Buying Club, it operated on the honor system and a coffee can to collect money. Today, the co-op is supported by nearly 9,000 members/owners.

Wade says the co-op wants to dispel the common misconception that people have to be a member to shop there. The Denfeld store’s entrance features large lettering that reads: “Everyone welcome.”

Although it’s not necessary to be a member to shop at the co-op, there are benefits to becoming one. Members get special event invites, discounts and a patronage rebate based on profits and how much the member spends at the store. The co-op abides by seven Cooperative Principles, which include democratic member control, so members also get a vote. Currently, membership involves a $100 fee (which can be paid in $20 installments over the course of a year). This $100 is an equity investment, the co-op is a community-owned business, which is why it refers to members as “owners.”

The Denfeld store creates 55 new jobs. Eighteen employees will transfer from the Hillside to the Denfeld location. With the new store, the co-op now employs a total of 156 people and expects to hire a handful more. Wages for entry-level jobs start around $10 per hour. Benefit packages for full-time employees include insurance and a 401(k) plan.

Wade is a relative newcomer to the co-op team. She’s impressed with “the big investment the co-op makes in every employee” and “phenomenal amount of training” they receive.

The Denfeld store’s grand opening events will take place in April during the week leading up to Earth Day. Kaleidoscope: Save the Date

Girl Scouts of Minnesota and Wisconsin Lakes and Pines present the third annual Kaleidoscope for girls and adults on April...