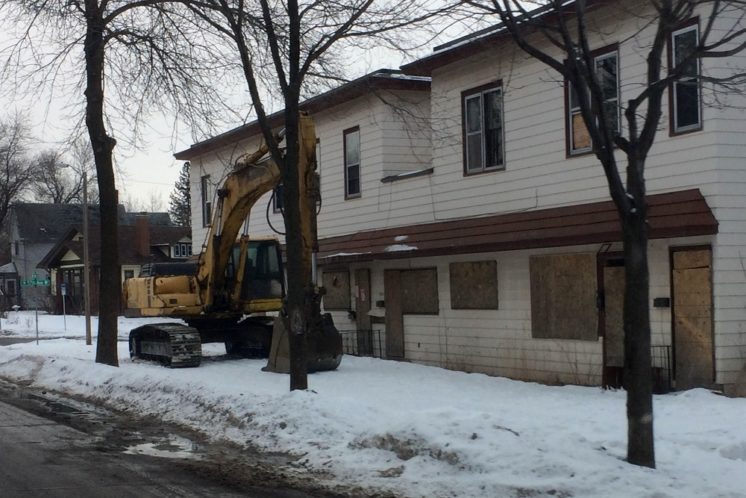 Built in 1916, it served into the 1940s as Reuben Paulson’s grocery store and meat market. Advertisement for E. R. Paulson’s grocery store and meat market from the Dec. 2, 1921 issue of the Duluth Herald. The building’s era as Eighth Street Market ended in the late 1980s. Apartments in the building were occupied beyond 2010.

On May 15, 2012, the Duluth Fire Department responded to a report of flames inside the building’s lower level. Firefighters controlled the blaze within 30 minutes. The building had been condemned for human habitation by that time, so it was unoccupied. Because there were no utilities in the building, the fire was considered suspicious. An arson investigation found no culprit.

The Eighth Street Market sign remained on the building until 2013. Eighth Street Market was best known for its friendly proprietors, Mardell and Wilfred Pelican. Mardell’s trademark was to greet customers by saying hi twice in rapid succession. “Hi-hi!” The walls were covered with photos of kids in the neighborhood who frequented the store.

A journey along the edges of the Land of Wonder

At the Duluth Art Institute, right now, exists a portal into other worlds and an alternate way of being. Head...