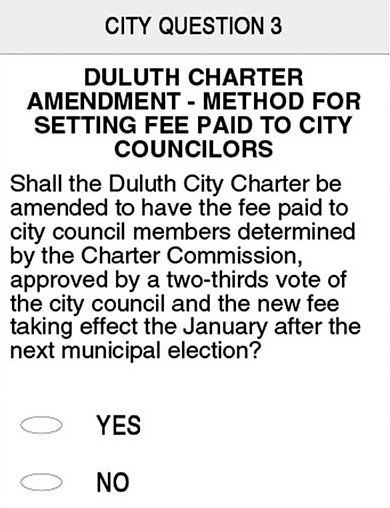 After publishing the Duluth 2015 General Election Sample Ballot, a question arose. We’ve been hearing a lot about ranked-choice voting and Lakeside liquor sales, but what’s the deal with question #3?

The way things work now, Duluth city councilors can only receive a pay raise by unanimously voting for it themselves or putting it to referendum vote in order to amend the city charter. This is apparently a lot to ask, because council pay hasn’t been raised since 1999. So, for the past 16 years councilors have made $10,000 per year. It’s considered a part-time job, but some councilors say it takes a lot of time to stay on top of their constituents’ concerns.

If citizens vote “yes” on this ballot question and opt to change the city charter, there will be regular third-party reviews of city councilor pay by Duluth’s Charter Commission. The commission would then make a recommendation on whether to adjust the amount councilors are paid. A two-thirds majority vote of the council would then be required to approve the measure.

Charter commission members are determined by the district court — not appointed by the council or mayor — so the argument in favor of this new system is that it removes politics from the process.

The argument for voting “no” would be that citizens might wish to retain the power to vote on pay adjustments if councilors are not in unanimous support.

What's the deal with Curious Goods in Superior? If you've driven by 1717-1/2 Winter St. and wondered if the store...