Tim Kaiser celebrated the kickoff of his crowd fundraising event by performing at Jefferson Peoples House in Duluth. Tim’s instruments are all invented– an electrically amplified finger piano played with a violin bow, so many boxes with knobs and switches, instruments operated with a stylus. Music made in a way no other musician in Duluth makes it. The music is based on repetition, like so much of my favorite electronic music, and innovation. Kaiser creates music as much as soundscapes, pieces are as much songs as movements, carrying you through the soundscapes. 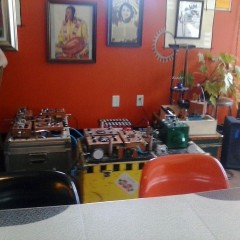