This afternoon I was driving back from the dump when I saw a car with its flashers on on Rice Lake Road. I slowed to … basically to rubberneck, but, you know, to see if everything was OK. They were looking at this bald eagle that was staggering along the narrow green space between the highway and the wetland that it passes through. I had heard somewhere that bald eagles, are deadly apex predators from the air, but vulnerable and gimpy on the ground. Reading up on them tonight, I find that may not necessarily be true, especially not at this time of year which is well past baby-bird-learning-to-fly season. I drove past, but meddling do-gooder that I am, I just had to go back and at least check it out. I chatted with another couple of folks and ultimately I decided to call Wildwoods which is such an amazing organization that educates people and helps to rehab certain kinds of wildlife after they have had run ins with people. The helpful lady at Wildwoods asked me some questions that helped me to realize that I know basically nothing about eagles. By that time we had figured out that the critter was actually down and feasting on a road-killed deer. But to my untrained eye he was walking about fairly awkwardly and the bird was also all wet, which, again, I had no idea what the meant, but it didn’t seem good. I also could tell by the clock that in about an hour or so Rice Lake Road was about to get slammed with one of it’s mini-rush hours with the shift change at United Health Group and Minnesota Power directly across the street, and Edison Northstar Academy would let out soon afterward.

According to the Minnesota DNR, situations like this one are actually a major threat to bald eagles: 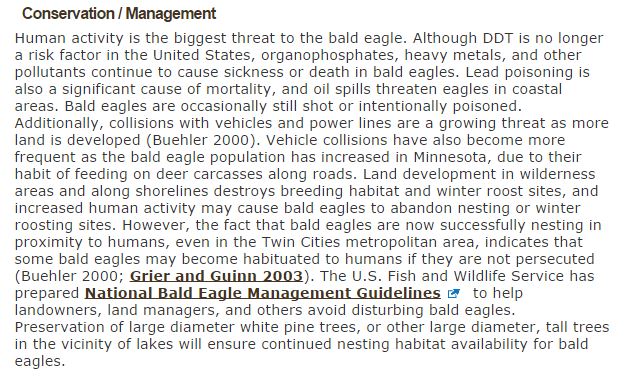 While I was waiting for the DNR to arrive this guy got a little restless and started hobbling out from the dead deer, onto the shoulder and, first I tried to shoo the guy back to his dinner carcass, but he was having any of that. So I headed back into my van and trailer rig and prepared for some defensive driving. Defensive of wildlife, that is. As I quickly started my engine and checked for traffic, the bird stepped onto Rice Lake Road itself. I feared that I was about to witness the massacre of America’s national symbol! So I eased into the driving lane and blocked the cars that were coming behind me (a half mile or so away) and just sat there with my flashers going hoping the critter would stop before hitting the opposing lane where I could do nothing really to save him. Then, after what seemed like a few minutes, but could have been less than a minute, he spread his wings, let loose a flap or two or three or four and he was up and away. I called back Wildwoods and they told me that it was a good sign that he could fly even 15 yards or so, and that from his perch he would most likely be OK. I snapped another picture and took a short video of him in the tree and headed for home. Does anyone have any word on building restrictions on Skyline Parkway? I'm asking because someone built a house on the...