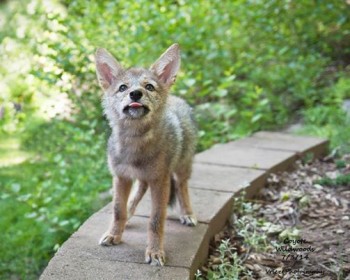 Look who came to Wildwoods last week … a little “song dog” pup (aka coyote)! He was found by himself when he was about 3-4 weeks old, and has been raised by humans since. As a result, he is very human-habituated. Dr. Deb, who cares for and releases any coyotes we get, does not think he will “wild up,” and has determined that he is non-releasable because of his extreme comfort around humans. (P.S. — despite this, he would never make a good “pet”; wild animals don’t adapt well to being “pets,” and it’s unfair (and illegal) to ask that of them.)

Fortunately, there are wildlife programs who would love to have a coyote like him to serve as ambassadors for coyotes everywhere. These education animals teach the public about coyotes and the valuable role they play in our ecosystems. They teach that coyotes are not evil villains to be feared and hated, but beneficial native predators. Ambassadors for species that are vilfied, like coyotes and porcupines, can make a big difference in how people view their kind!

We found this little guy a place in a program like that, where he will have a great life while educating people. Programs like this often bond the coyote not only to people, but to a dog the same age and size, if there are not other coyotes for him to be with. That way, he’ll never be lonely. He will also have as much human interaction as he wants (right now, he loves it; he sees humans as his “pack”).

Want to learn more about these inquisitive, social, intelligent survivors? Check out “God’s Dog: A Celebration of the North American Coyote”. It’s a wonderful read! http://amzn.to/1mrmFT6

We’ve been spending a lot of time with the coyote pup since he arrived. It’s interesting to see the many similarities he shares with domestic dogs, as well as the ways in which he differs from them.

His body language seems pretty much the same as a domestic dog’s–tail-wagging in greeting, bowing to invite us to play with him, face-licking, smiling, rolling on his back submissively, or deferentially licking his lips.

Though he is very socialized to people, his primary focus (unlike a dog) is not people. I remember, years ago, taking my dog for a walk when she was a puppy. Though she was certainly very interested in the world around us, she primarily watched me.

In contrast, this little guy’s attention is everywhere–every sight, sound, and smell totally compels his attention as it occurs, and his large ears swivel like radar dishes, missing nothing.

He’s been living indoors before coming here, and so all of these outdoor stimuli are new to him. At first, he was overwhelmed and fearful, but now he’s increasingly interested in everything.

He seems instinctively afraid of open spaces. When we walk in the yard, he hugs the underbrush-y edges, slinking along under the bracken and ferns, and feeling safe only when he is covered up and unseen.

Though he has a mild interest in dog toys, he seems to know that they are pale substitutes for what he is really meant to be chasing, catching (and killing)–mice, rabbits, etc. So a squeaky, bouncy ball has transient interest for him, at best.

When he has more food than he can eat, he instinctively knows how to cache it for later, and carefully covers it with folds of his blanket.

We see all of these instinctive, hard-wired behaviors, as well as his increasing delight and fascination with the outdoors, and we mourn that he cannot have the wild life for which he was created.

We are very grateful for the education program to which he is going, for they will do their best to give him a good life filled with stimulation, enrichment, and companionship.

During his life there, we hope that he will teach many people that coyotes are not evil, or to be hated or feared, but intelligent opportunists, to be planned for and worked around. As humans, we must use our own ingenuity and creativity to find ways to exclude coyotes and other predators from interacting with and harming livestock and pets, while leaving them free to do their valuable jobs in our ecosystems. These “God’s Dogs” — intelligent, opportunistic survivors, deserve our respect and admiration rather than our hatred and violence.

To learn more about these amazing creatures, check out the book “God’s Dog: A Celebration of the North American Coyote” by Hope Ryden.

Love our work, and want to help? Gift our babies with an item from our Amazon Wishlist here.

Or, make a tax-deductible gift via PayPal here. Follow us in the Budgeteer!

Thanks so much for your support!

Visit the new issue of local arts and literature magazine Prøof. Glad to see the Ennyman and my colleague, the...