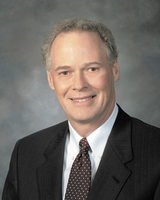 Charlie was a passionate community leader — he was a rare breed of a man who dared to dream big and then rolled up his sleeves to get the job done. His list of accomplishments on behalf of Duluth is long. He made a significant impact on behalf of seniors, public schools and his beloved West Duluth. Charlie was an innovative businessman who was always looking for the next opportunity to invest in West Duluth.

Obviously, Charlie and I will be forever linked in local history because of the 2007 mayoral race. At that time, we agreed that we were not running “against” each other — but rather we were both running for the same position. Because of that, we were able to maintain our friendship both during and after that campaign — certainly unusual in the history of Duluth mayoral races. We were both proud of that.

Over the years, I had many other opportunities to work with Charlie — I always had nothing but respect for his passion, his enthusiasm, and his love for this city. Next Monday, my State of the City address will focus on West Duluth and the St Louis River neighborhoods — I plan to pay tribute to this great man and his many contributions to our city.

Leaders like Charlie Bell do not come around very often. What a sad, tragic loss for his family, his friends, and this community. Rest in peace, Charlie — we will miss you.”

Duluth's Vivielle blends two-part vocal harmony with the lo-fi approach of Sebadoh. The four-piece is made up of brothers Lino...