Behind the scenes at Sheila’s belly dance class 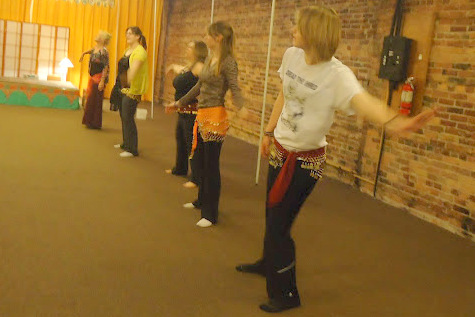 Students warm up their hips and arms, and stretch out their bodies to get ready for belly dancing.

This past Tuesday night women gathered in the Lotus Center to practice one of their passions, belly dancing. The Lotus Center is on the second floor of Global Village on West Superior Street.

The event began with instructor Sheila Matthews leading the women in a warm up to get their hips moving and muscles stretched. Mathews then practiced the basic moves with them, both with and without music. She then had the girls run through a couple of routines that she had choreographed to music. The event ended with a cool down in which every one could practice whatever they wanted to a Shakira song. Instructor Sheila Matthews demonstrates to the class how to incorporate a twist of the feet while shimmying.

Matthews has been dancing for 14 years and teaching for 12. She is also an instructor of zumba, hydro fit (water aerobics) and recently got certified to be a yoga instructor.

“One thing that is cool about belly dancing is you can do it well into your eighties. It is something I can do for a long long time,” Matthews said.

Matthews attended University of California Riverside where she studied modern, jazz and creative dance and has been choreographing, performing and teaching ever since.

“It is an excellent core, leg and arm workout,” Matthews said. “It is a great exercise, great for toning and low impact.”

Matthews thinks another thing that is great about the dance is that it is meant for women of all ages, shapes and sizes.

“The more body you have, the more beautiful the dance is,” Matthews said.

Out of all the dances she has learned over the years her favorite is Middle Eastern dancing, because she has been doing it for so long.

She thinks the hardest concept for her students to grasp is learning how to relax.

“The hardest thing for brand new students is for them to relax the body and let it go and let it all hang out,” Matthews said.

Matthews teaches belly dancing three times a week at three different locations, and also does both private and group lessons. She specializes in teaching beginner and intermediate levels.

“It is really hard to combine ladies of all different levels,” Matthews said. “Some of these ladies have been doing this for 15 years and some of them have only done it a couple of times.”

She said that the number of students that show up depends on the week. Sometimes she has 13 students and other weeks she only has four students.

Despite their different levels the women all manage to get along and develop great relationships with each other.

“It is a great bonding experience for women, most of these women come here not knowing each other, but leave friends,” Matthews said.

Matthews has formed a long lasting bond with one of her students, Helen Makela. Similar to Matthews, Makela has been dancing for a very long time, 12 years to be exact.

Makela said she attends multiple belly dancing classes with different instructors so she does not get tied into one style pattern.

She became interested in belly dancing a dozen years ago when her husband was away in the middle of January and it was freezing outside. She said she spent too much time being bored and one day decided to try belly dancing. She had never taken any kind of dance class before.

“For some reason it just grabbed my attention,” Makela said.

Her favorite part about belly dancing is the collaboration with the different women.

“You can’t help but feel good about yourself because you’re in the presence of such good women,” Makela said.

On top of practicing some of the choreography Matthews has given her to practice, she also likes to choreograph some of her own stuff.

“When you get done you can’t help but feel like you have accomplished something,” Makela said.

She recommend belly dancing to other women because it is great exercise, a great stretch, and teaches you body awareness and relaxation.

The hardest thing for her to learn was isolation and layering. Friends Emily Coutoure from Duluth and Alix Jolin from Hermantown have both been attending Matthews class for about a month now.

“It was just something we always wanted to do,” Coutoure said. “We saw a commercial and decided what the hay lets give it a try.”

Both the girls said they are trying to get their friends to join them, but they seem to always have an excuse of being too busy.

“There were a couple days where we didn’t have school because of the weather, so we decided to spend the blizzard here,” Jolin said.

Both of the girls seemed to have fun the whole night in spite of sometimes embarrassing themselves. At one point during a dance Coutoure lost her skirt.

“I embarrass myself sometimes. Last week I hit myself in the head with a cane,” Coutoure said.

Matthew’s class at the Lotus Center is offered every Tuesday from 6 to 7 p.m. and is open to all levels. Admission is $7 per time or students have the option to purchase a “dance card” which gives them eight lessons for $42, saving them around $5 in the long run.

Matthews next performance will be March 2 during the Women’s Expo at the DECC. She and her group will be performing around 12:30 p.m.

The Tisdales (photo by Ray Reigstad) Ryan Van Slooten (photo by Jeremiah Brown) With the Homegrown Music Festival coming up...