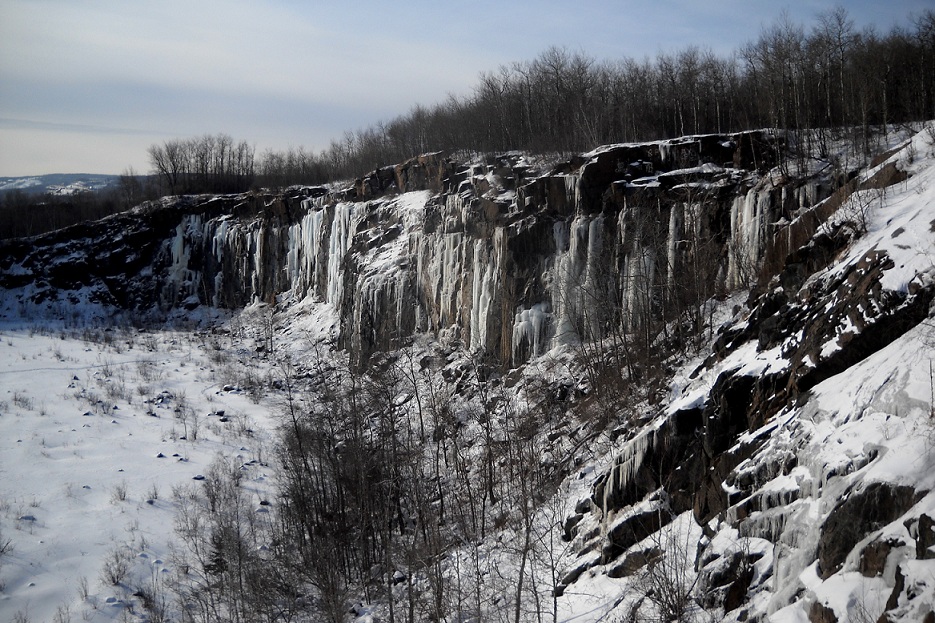 The clip below, from the Jan. 20 edition of Cement and Engineering News, refers to a different quarry but provides a bit more info on Duluth Crushed Stone Co. But the mother load for those who want to geek out on quarry details is the 1912 book Rock Drilling, with Particular Reference to Open Cut Excavation and Submarine Rock Removal, by Richard T. Dana and William Lawrence Saunders. And the whole damn book is embeddable.

Here are some highlights from the above-embedded book:

The Duluth Crushed Stone Company operates a quarry at the end of 57th Avenue West, in West Duluth. The rock is a hard bastard granite in its natural bed in the side of the rock hill that rises from Duluth Harbor and follows the shore of Lake Superior east, and the St. Louis River west from Duluth. In many places the rock outcrops, and above the present quarry, rock is to be seen on the surface where no stripping will be necessary. The maximum depth of stripping is in no place over 3′, except where faults occur, and the average depth is not more than 1′.

The condition of the rock varies greatly in different parts of the quarry, and also in the same part of the quarry as the face is worked back. In some places the rock is absolutely solid without a check or irregularity in structure other than is ordinarily found in this kind of rock, while elsewhere it will be badly cracked and full of seams, with its entire structure irregular and badly broken up. This latter condition exists especially in the west end of the quarry.

The product of the quarry is crushed stone in sizes from dust to 2.5″ and rubble of any size as ordered. The structure of the rock does not permit of its being taken out for dimension stone or of its being cut easily, although it could without doubt be worked into regular shapes if occasion arose. The stone company does not undertake to furnish such stone, however, and so makes no effort to quarry it.

Beside its regular output of crushed stone and crusher dust the quarry is at present filling two contracts for rubble. One of these is with the Great Northern Railroad, and calls for quarry run rubble up to 6″ size. This material is loaded into skips by hand and is raised by a locomotive crane and dumped into gondolas. The other contract is for furnishing quarry run rubble up to 10 tons size, the number and amount of blocks of the latter size being regulated by the demand of the purchasers of the stone. This stone is being used in the construction of a breakwater at the Superior Entry of the Duluth-Superior Harbor, and as the portion now being constructed is in shallow water the amount of 10-ton stones being shipped is about 50% of the total amount. The heavy stones are used for paving the surface of the breakwater.

At the present time the rock in the quarry is running so unevenly and is so seamy and broken up in its bed that it is extremely difficult to obtain the desired amount of 10-ton stones. For the rest of this contract nothing as small as a two-man stone is shipped, but only large blocks which are handled by the crane. All this material is loaded on cars by the crane, being chained and lifted. It goes on and on.

Below is a newspaper clipping via the West Duluth Memories Facebook page, from the Oct. 2, 1922 Duluth Herald. Time once again for the exciting quiz sensation in which you try to guess where in Duluth a photo was...