What a week for nerds!

What a week for nerds! Sept. 11 was the sellout Nerd Nite at Teatro Zuccone. 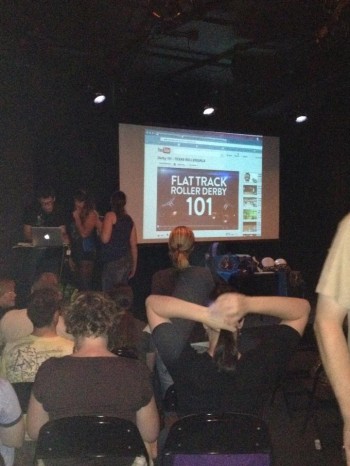 Nerd Nite, organized by Jer Nilsen, Crystal Pelkey, and Adam Brisk, is nearly a religious ritual for me.

(It helps that Reverend Lee attends nearly every one. If you haven’t read this pastor from United Church of Two Harbors‘s recent column about upcoming constitutional amendments, you haven’t heard what the voice of religious conviction sounds like, when it is committed to the search for truth, rather than its presumption. See here or the Lake County News Chronicle for more.)

Nerd Nite is where I take new Duluthians to find community, to experience people who share their passions and their humor.

Tonight’s Nerd Nite was stellar. We met the passionate founders of a local microbrew (Blacklist Brewery), a local Norse Mythology nerd, and my favorites, the Harbor City Rollerdames. The power of social media: I mentioned this to the Dames as a way to build an audience here and on Facebook at the end of last season. Here, they were, and they were electric.

I could have watched Killer Cletah crackle with the love of the sport all night, while Whoremione Grainger kept things cool on the sidelines.

(Where were you, Norwegian Squirrel and Wright Round Ya?)

All of this was on the heels of Munchkin Monday at Rogue Robot, where we met a veteran IT administrator at a local architecture firm and his wife and mother of their four daughters. We also met the newest employee at the Children’s Museum, and his spouse, freshly relocated to Duluth from Denver.

Nerd Culture is the place where it is safe to try to meet new people. We’ll mumble, look at our feet, but never say no.

Harbor City is pleased to announce the screening of Derby, Baby! on Sept. 13 at 7 p.m. Screening is to be held at the Zinema in Duluth and tickets are on sale now for $10 per seat. Limited tickets will be sold, so get yours in advance at the Zinema Box Office or Online! Join their Facebook event for this exciting documentary screening.

will join our partners and ornithological nerds from across the state. Wildwoods is a 501c3 nonprofit in Duluth, MN. Our wildlife rehabilitators and volunteers work to help orphaned and injured animals return to their natural lives, and to be a resource for people who find these animals. Come up to the ridge and learn more about birds, wildlife, and volunteering with us.

When people say, Duluth is cold to outsiders, I say: you’re right, and it makes it damned difficult to be a transplant. Everyone is coldly polite instead of actually interested in your life.

I need some people to shoot. (Camera, not rifle)

So I got this little photography art show coming up at the DAI in like, tw... thr... fifteen months from...