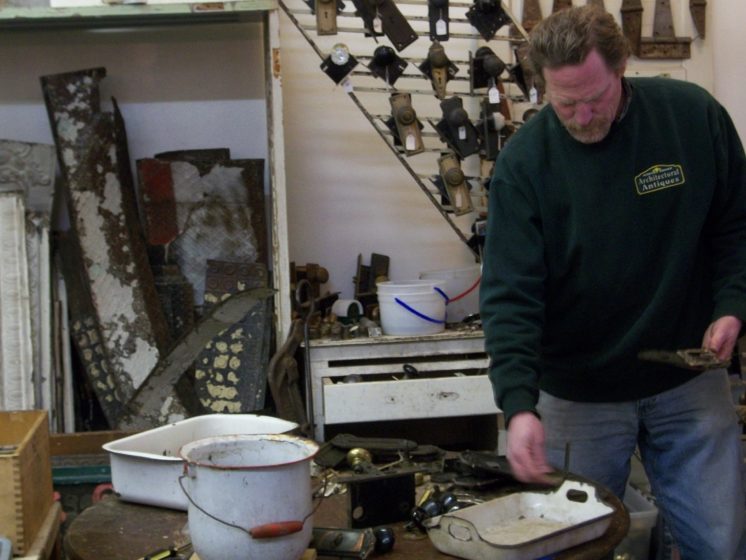 [This five-part series profiles local dealers of used goods, in all their rich variety. Others in the series: Sellers Auction, Retro Antiques, Central Sales and Art in the Alley.]

“Basically anything you can get at Menards, but 100 years old,” McCarthy says.

Joel Hoffman, one of his regulars, has been coming to the shop for three or four years.

Hoffman found the shop online, where he says there is quite an extensive salvage yard network.

“A lot of it is restoring detail work,” Hoffman says. “Getting things like switch plates, knobs, crown molding, baseboards … Environmentally, it’s nice to do this because you’re basically recycling.” McCarthy has been “recycling” for much longer than 10 years.

“I grew up in a house full of antiques, so it’s a multigenerational addiction,” he says.

He started the shop at his wife’s suggestion, after losing money on a couple of house restoration projects. He decided to put his collecting to good use. For three years he worked on accumulating, and then for another three years he ran the shop full time. He couldn’t afford to keep it open with two kids to support and health insurance to pay for, so he started working again and kept the shop open part time.

“So it’s become a hobby, I guess, but it actually makes a few bucks now,” he says. “[There are] a lot of easier ways to make money, but we love it. Everybody should do something they love.”

“I like being able to work with my dad and stuff,” she says. “Most of the time I come here and help out and try to earn some money.” This 1915 ceiling medallion is from St. Joseph’s Orphan Home in Superior.

McCarthy gets clients from as far south as the Twin Cities and as far west as Fargo.

“It’s definitely the customers,” McCarthy says. “When you meet people that love old stuff that you love … I love to have customers who take a beautiful old door and restore it.”

McCarthy only keeps the shop open Saturdays from 10 a.m. to 5 p.m. now, as well as by appointment, but he hasn’t given up on the full-time dream.

“I hope to by the time the kids are done with high school and this country figures out how to deal with health insurance,” he says. “If you can’t insure your family you’re not being very responsible, so you have to get a real job with benefits.”

Here's a sampling of a few things listed on the Perfect Duluth Day Calendar this week. Apparently this is the...