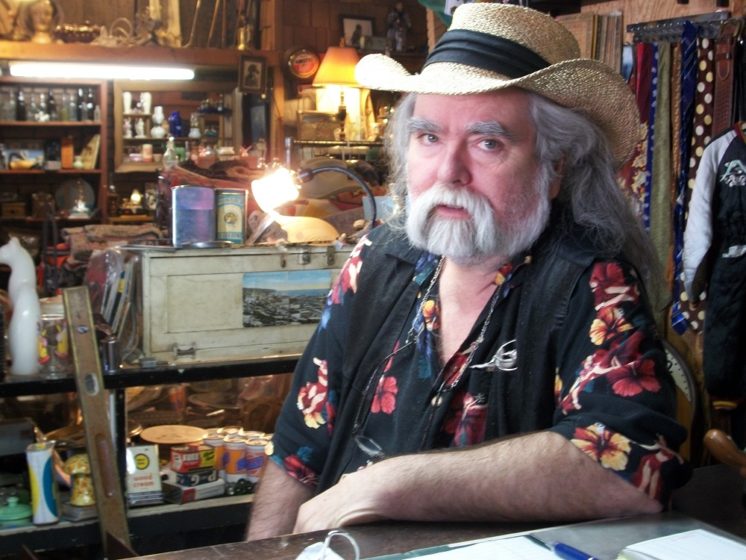 [This five-part series profiles local dealers of used goods, in all their rich variety. Others in the series: North Shore Architectural Antiques, Sellers Auction, Central Sales and Art in the Alley.]

Panama Jack, a man with a gray beard and a black cowboy hat, sits behind the counter at Retro Antiques in Downtown Duluth and makes jokes. Oh, and he’s also the manager, or “referee,” as he better defines it.

“More or less it’s like a three-ring circus,” Jack says. “You never know what’s gonna happen next … You could film one of those reality shows about it.”

Did he open the place?

Jack had two co-founders: Doug Moen and Jeff Moreno. All three of them are full time.

Moen and Moreno are here, in fact, bustling around and working to the sounds of Billy Joel’s “Honesty” and the smell of burning incense.

“Too old to do regular work so now I’m working harder,” Moen says as he prices a wide variety of items including a stuffed cow.

The goods in the shop are all from different dealers, each of whom has his or her own area. Retro Antiques sells everything from comic books to fishing equipment to vintage bike parts, artwork and clothes. There are model cars for model-car collectors and beer-collector things for beer collectors. Once they sold a wrought iron cage for an elevator. 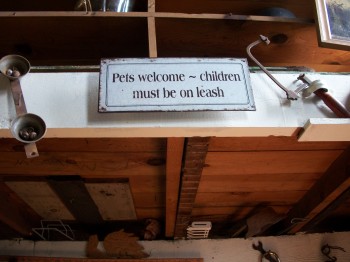 “We’re not really so much like a knick-knack shop,” Jack says. “So our shop is kind of different from a lot of these other ones.”

Moen chimes in as he walks by, “That’s ’cause we’re different. We’re all retired hippies.”

Moen contributes the largest selection of vintage clothes around to the mix.

Moen got out of the Navy and began collecting in 1966. He has several “depots,” as Jack calls them, around town to store his collections of clothes, including one below the old NorShor Theatre.

“That catcher’s mitt right there, that’s been stored for a while,” Jack says.

Moen has run his own vintage clothing shops in the past, and with retirement approaching he is hoping to find someone to carry on his legacy.

“Now it’s getting a little serious, because I’m getting older,” Moen says. “I was actually gonna try to find some other kindred spirits to reopen.”

Until then, his collection rounds out Retro Antiques’ unique mix nicely.

“Most people, they really like this place because of the variety,” Jack says. 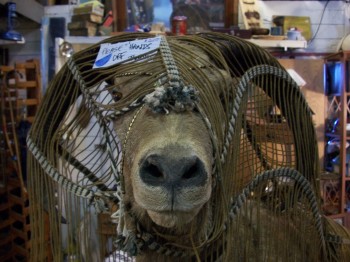 Billy, a newcomer to Retro, hails from the Rocky Mountains.

Retro Antiques is open seven days a week. When it’s nice out, the garage door is opened and the place is filled with light and fresh air.

Chris Krmpotich, an employee and one of the dealers with his own section in the store, joins Jack behind the counter. “Nobody’s getting rich. If anything we’re getting more junk.”

For the sake of clarity, the implication is that he sells a lot of toys.

“We sell a lot of curious goods,” Jack says. “See that bunny over there?” He points to a larger-than-life bunny figurine. “He’s not necessarily a hundred years old but it’s a curious good. Kind of funny stuff.”

Jack got into the antique business for one reason.

“Didn’t know any better. I wouldn’t advise anybody else to do it.”

The store is full of so much merchandise, Jack and his crew have taken some security measures to ensure the safety of their customers.

“If a pile of junk falls on you and we can’t find you, every few hours we send a St. Bernard around,” Jack says. “Don’t worry, we’ll find you.”

I am coordinating an event with about 12 college students attending. The dinner request is for "Chinese" [or similar]. This...