Something funny happened on the way through the drive-thru 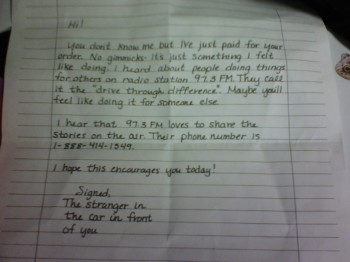 Here’s an actual photo of a letter that someone I work with received this week. She was just going through the drive thru minding her business when the car in front of her paid for her coffee and egg sandwich, anonymously. It definitely brought a smile, which I guess is the whole idea.

It reminds me of that saying that was popular in the 1990s: “Practice random acts of kindness and senseless beauty.” But it’s not random, at all. It’s called the “Drive Thru Difference” and I had heard about it being done as a consciousness raising campaign of KTIS-FM in the Twin Cities, and even read a blog about it awhile back. But apparently it’s happening in the Twin Ports with KTIS sister station KDNI-FM leading the way.

If you’re wondering about the mechanics of it (which I was), here’s a YouTube video of singer-songwriter Brandon Heath (who I really like) actually doing it at a Dunn Bros in the Twin Cities:

Here's a bunch of reasonably credible information that I didn't have time to delve into for details this week, so...