An earlier post about a car hitting the Kozy brought a discussion of the building, so I thought I’d share what I know of the building. So here’s some info on the Kozy we at X-Comm have gathered for a forthcoming book, Duluth’s Grand Old Buildings.

Pastoret Flats was designed by Duluth and Honolulu architect Oliver Traphagen and commissioned by Michael Pastoret in 1887. The Romanesque Revival building, faced in brick and brownstone, included a corner tower which with a witch’s hat roof, which was removed about 1924. The architecturally incongruent addition on first floor was added in 1924. Originally the building held six townhouses which were advertised in 1887 as “costly residences,” each of two stories with front porches, arched windows, some with balconies and wrought iron railings on the roof line.  Sometime, probably in the 1920s, the townhouses were remodeled into small apartments. Also in the 1920s a restaurant opened on the corner and after Prohibition that business became the Kozy Bar.

Along with his partner Oliver Stenson, Pastoret, described as “a capitalist” in 1888, also built the Pastoret-Stenson Block (aka Lowell Block), another Richardsonian Romanesque Traphagen-designed building at 29-33 East Superior Street in 1888 using brownstone quarried at Ingall’s Quarry in Fond du Lac. Originally six stories high and decorated with and stone carvings, the top three floors were removed after a fire in 1930 (four died in the fire) that was rumored to have been started by the explosion of a still (Prohibition era). 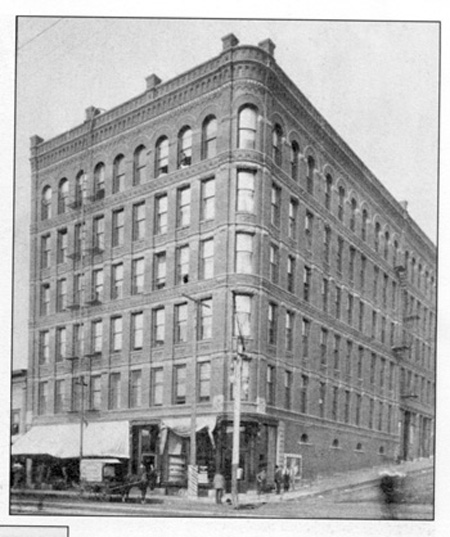 The building was first used to house Pastoret and Stenson’s dry goods store (Pastoret later switched to real estate; his brother was a noted contractor), then rented to an undertaker, Singer sewing machines, Gotkins Greater Markets, B & Y Cap Company (the fire took place under their watch), King Korn Stamps, the Duluth Sewing Center, and even a Radio Shack. Last residents: John’s Used Furniture and the Last Place on Earth. The building was demolished by A&L Development to build the Technology Village.