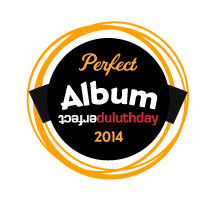 It was actually a late-2013 release, but Red Mountain’s debut album Scowl Lightly captured the most attention in 2014 among voters in Perfect Duluth Day’s poll to name the top local album of the year. Issued on vinyl and compact disc by Duluth’s Chaperone Records, Scowl Lightly brought band leader Anton Jimenez-Kloeckl’s evolving musical project out of the shadows of the weirdo-experimental scene to top billing at local festivals — with enough performance antics to proudly retain the weirdo label. In a review for the independent music website Wordkrapht, Ellen Vaagen writes that Scowl Lightly is “a baroque pop gem spattered with claps, bells, trumpet, and saxophone floating on a clear stream of fancy-free fun” and the band’s live performances “are a fantasia of dancing, face paint, feathers, masks, and flamboyant sequin costumes that encourage crowds to let their freak flags fly.” Members of Red Mountain accept the PDD Award for Perfect Album of 2014 at the Red Herring Lounge. (Photo by Steve Ash) 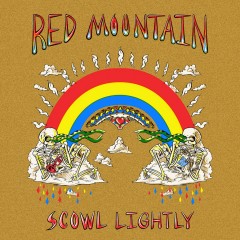 Perfect Duluth Day rendezvoused with Red Mountain on Goat Hill, and put together a little something special to get you in the spirit of hanging with friends and family this holiday season. Thanks to the Homegrown Music Festival for support in putting this together.

Find this video and other short clips of antics celebrating the season by clicking on this highlighted red text to view “A Perfect Duluth Christmas: PDD’s Holiday Video Showcase.”

Red Mountain surrounds listeners with an eclectic blend of sounds and rhythms. In this interview, band members talk about how the song “Chad” began as a friend’s dream. Red Mountain is working on a follow up to its debut album Scowl Lightly. Click on the image above to listen.

Red Mountain — “Put Me Through”

The dancers are Erin Tope, Maeggie Licht and Grace Holden. The video was produced by Lakefront Films.

This just in: Red Mountain and Christine Hoberg are into teasing

Above: Teaser for the upcoming Red Mountain album Scowl Lightly.

Below: Teaser for the upcoming Christine Hoberg album World Within.

Both videos are from Duluth-based Lakefront Films.