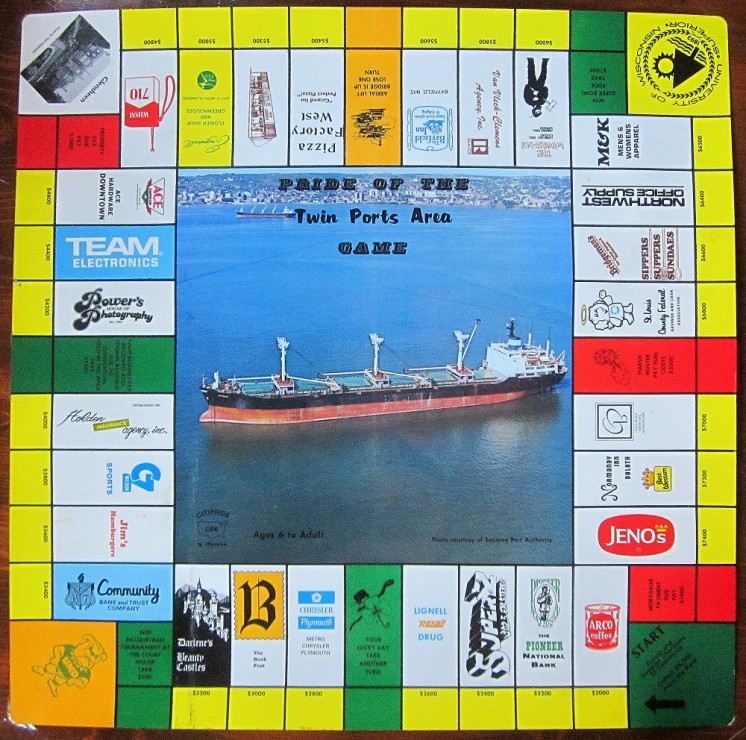 From the heyday of Monopoly comes … Pride of the Twin Ports Area Game! It doesn’t appear to be something local marketing geniuses came up with, but rather a product of a company called Citipride of America, which probably made different versions of the game for different cities across the country. Perhaps the local Chamber of Commerce sold sponsorships on the game board to various businesses to raise money to have the game made, and then sales of the game raised money for the chamber … or something. That’s all conjecture; there doesn’t seem to be any info online about the game or the company.

So, does anyone else have this game? Can anyone put a year on it? It’s no older than 1978, because the instructions contain historical info about the sponsoring local businesses and mention that Northwest Office Supply expanded in 1978. It’s no more recent than 1982, because the Normandy Hotel was taken over by Holiday Inn & Suites that year. The paper over the windows at this classic restaurant on the ground floor of the Seaway Hotel, 2005 W. Superior St. in Duluth’s friendly West End, reveals it is out of business. (Jim’s Hamburgers was included in the “Breakfast in Duluth” post just 10 months ago.)

This was the last of four Jim’s Hamburger locations in Duluth. Jim Overlie was the founder, opening the first one in 1937. I think the West End location opened in the 1940s. Overlie sold in 1985 to Dick and Mary Christensen. Dick died in 2000 and Mary died in 2006. Their son Denny took over ownership.

Breakfast in Duluth: Comparing the diners There are many great places to have breakfast in Duluth, but only a handful fall into the true breakfast diner category. Barrett Chase and Paul Lundgren set out to compare them all and report their findings on Perfect Duluth Day, so readers can admire their astute observations and compliment them publicly, without the briefest passing thought of contradicting any of the information presented.