The Duke of Duluth, Redux

In the interest of furthering the ongoing fascination with the “Duke of Duluth” on PDD [1][2] and in the broader Duluth community, I submit this 15 January 1908 clipping from the Duluth Weekly Herald. Given the description of the unfortunate Arthur J. Baird–“claimed to have acquired his nickname by reason of his hirsute adornment, his education and general demeanor“–it seems possible that he might in fact be the same man in the photograph Nemadji posted in 2010.

It would appear that some members of the local community, inspired by Nat M. Wills’ 1905 musical “The Duke of Duluth,” bestowed the mocking title on Baird, but that’s the limit of what I’ve (accidentally) found.  Stay tuned for more fascinating updates if/when they appear. 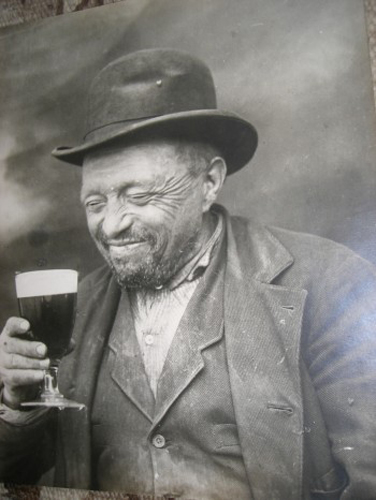 Back in June, 2010, PDD featured a post about the photo above, which was labelled “The Duke of Duluth.”

We have been digging into all things “Duke of Duluth” and “Duluth Duke(s)” over at Zenith City Online. The first of three stories on the topic posts today and discusses two literary dukes of Duluth: a 1905 Broadway play and a 1926 novel. And the story just may shed some light on that photo. You can read it here. Superior isn’t the only city that enjoys its suds. This photo was bought at an auction several years ago. On the frame, it is titled “Duke of Duluth.” I know it is not the Duke of Duluth I am thinking of. Notice the great detail of flies on the beer mug. Does anyone one have a clue as to who this guy was? The framed photo served as a traveling photo for a long list of jolly fellows. The name written on the cardboard backing is Gust. Munding, Rush City Minnesota. Was this part of a beer campaign?