The Duluth Fire Department tweeted this photo at 7:55 a.m. noting a heavy fire on the second floor of the Esmond building.

The former Seaway Hotel, more recently known as the Esmond building, burned for seven hours today while fire fighters struggled in sub-arctic temperatures to extinguish it. The condemned structure at 2001 W. Superior St. in Duluth’s Lincoln Park neighborhood has been vacant since 2020 with future plans for demolition and redevelopment.

The Duluth Fire Department was called to the scene at 7:36 a.m. Crews entered the abandoned building to do an initial search while crews from the 1 Tower truck used its 100-foot ladder to get a view from the roof.

At 7:49 a.m., Rescue 1, 1 Engine, and 2 Engine crews were removed from the building due to unsafe conditions and heavy fire. The fire had extended to the ceiling in the lobby and to the second floor of the building. At that point the fire switched to being fought defensively.

By 8:30 a.m. the fire had extended from the first floor to the second floor toward the rear of the building and reached the roofline. The Superior Fire Department was able to provide a 100-foot tower aerial apparatus to help fight the fire. 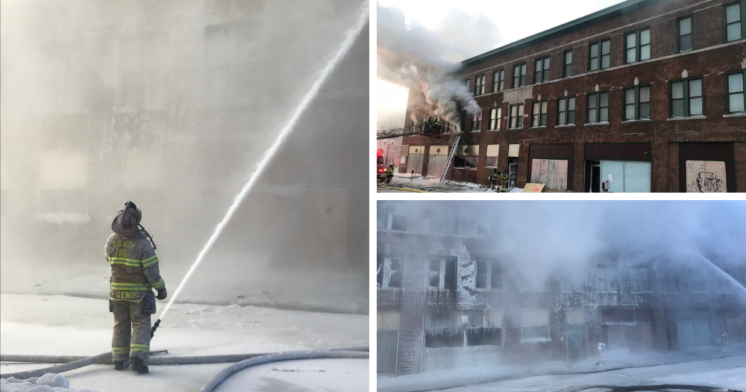 Just before 9:30 a.m., the wall on the rear side of the building was reported to be separating and heavy fire could be seen from the inside. Command staff contacted Minnesota Power to cut off power in the alley due to ice buildup and collapse potential. Just before noon, the power was shut off between 18th Avenue West and approximately 25th Avenue West affecting businesses and residents with odd addresses on West Superior Street and even addresses on West First Street until approximately 3 p.m.

Additional staff worked to evacuate businesses and tenants around the perimeter of the building as the wind continued to switch and push smoke into buildings. The decision was also made to evacuate as a precaution in case of a partial building collapse.

From approximately 10 a.m. to 2 p.m. four aerials deployed water in the four corners and core of the building. An additional hose line sprayed water into the building on North 20th Avenue West.

Lincoln Park businesses provided warmth and food to fire crews and command staff. J.S. Printing provided a space for crews to take turns warming up. The All-American Club provided hot coffee, muffins and sandwiches for crews to eat while taking breaks from the fire response, and were aided by Salvation Army volunteers who provided soup and coffee. ICO dispatched a diesel truck to refill fire apparatus during the fire.

Wind chill temperatures ranged from -35 to -11 during the firefight. Crews remained on scene after the fire to evaluate and put out hot spots.

The cause of the fire is under investigation by the Duluth Fire Marshal’s Office.

The building was constructed in 1913 as the Rex Hotel, later becoming the Seaway. In recent years it served as a residential hotel for approximately 70 low-income residents, but slowly fell into disrepair.

The Duluth Housing and Redevelopment Authority purchased the building in 2014 and maintained the property until it completed the nearby Garfield Square apartments and moved Seaway residents into the new building.

Merge Urban Development had plans to acquire the building and tear it down, along with an adjacent retail store, to construct Urbane218, a 45-unit apartment complex.

https://www.youtube.com/watch?v=FFXIutMIUA4 Claire Lemp, aka Claire Sahara, is an illustrator based in Duluth who showcases diversity in beauty in her illustrations...