To the Women Who Raised Me 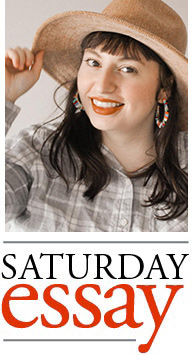 I was raised by immigrants from a big Turkish-Armenian family. It’s an old family, sprawling across Istanbul, across Turkey, across the globe. If I mention reading a study from New Zealand or Brazil or Lithuania or Poland or wherever, the response is inevitably, “Oh, we have cousins there!”

It takes a village to raise a child, and while most of our village was overseas I still felt their presence. I was singularly blessed to have a veritable metropolis of strong role models supporting me. Despite having been born and raised in America, my roots grew too deep in foreign soil to be pulled free.

Now I have a daughter of my own. A wide-eyed, strawberry-haired little gummy bear. She already loves dolma and a lengthy duduk solo. She is being raised not just by her Mama and Papa, but by a rambling expanse of extended family. In raising her, I have a new appreciation for the love and devotion of my grandmother, my aunt, and my mother.

My grandmother was a sturdy woman of porcelain and garlic. In old pictures she looked like a movie star, with eyes that twinkled like the night sky and hair like silk under a stylish beret. When I knew her she was old and wrinkled, her hair short and thinning, but her eyes still shone and she always wore lipstick when leaving the house. She carried the smell of lavender on her clothes.

As a child her father passed away and left her mother to care for five children, she being the oldest. From what I’m told she learned to work hard at a young age, supporting her siblings on money made hand-sewing custom brassieres for large-chested women. In her free time, she’d go to the cemetery near her home and dig up old skulls to see if their destinies were etched into the bone of their foreheads. She loved the smell of the sea and a good cup of chai.

When she met my grandfather, she told everyone she knew that she would never marry a bald man. She married him anyway, but in every picture I have of them together he’s wearing a hat. She buried her husband when her daughters were only teenagers, and she maintained her position as the emotional backbone of the family even after losing the love of her life. She was strong and delicate, down to earth and yet glamorous in a way that was as natural as breathing.

When she was in her seventies and her first (and only) grandchild was born, she left behind the only home she’d ever known and moved to Oregon to help raise me. She cooked all of our meals, she cleaned, she gardened, she sewed and knitted and made a mean homemade raspberry liqueur. She learned enough English to insist “No boy, girl!” when people inevitably referred to little baby Nicole with male pronouns.

When I was a kid I refused to wear anything other than the elastic-waist brown corduroy pants she’d made me. Every day at 1 p.m. we’d sit together and watch “Matlock dede” (grandpa Matlock) on the TV in our little living room. On warm days, we used to microwave sweet potatoes and carry them out to the garage where we’d sit in plastic lawn chairs and watch people go by.

My grandmother was, in my eyes, a perfect example of womanhood. She was my role model. She walked into a room and you knew she was in charge without her even opening her mouth. She wore the heck out of a pin curl. Her nails were perfectly round and smooth, but usually were stained by whatever she’d been cooking that day. She carried her purse like a celebrity, the straps dangling from her crook of her elbow, a slight bend in her wrist. She made friends everywhere she went, she always spoke her mind, she gave the warmest hugs. When telemarketers would call the house we’d give her the phone so she could declare, “No English! No English!”

When I was born, she promised my mom she’d live until I was ten years old. She passed away three months before my tenth birthday, drifting off to the great beyond in her sleep. It was Armenian Christmas, and we didn’t celebrate again for a long time after that.

When my auntie was in the throes of adolescence, the local boys used to follow her around town. They would sing “yemyeşil, yemyeşil” in testament to her mint green eyes. Her hair was thick and a deep red, a rarity in 1960s Istanbul. She went to French Catholic school, and unlike most people who went to Catholic school, she insists that it’s the best learning environment for a child. She has already offered to pay for my daughter to go to Catholic school. She has a keen eye and a quick temper. She was among the oldest of the cousins growing up, the boss, and she still carries this sacrosanct right in her bones.

It’s hard for me to imagine her as a child. She does the best “look,” the one every mom aspires to but very few achieve. She widens her eyes and furrows her brows and sees straight into your soul. I can’t imagine a seven-year-old giving that look to her little cousin, but I’m almost positive she did.

She has always been terrified of needles. Nurses used to deliver vaccines at her school, and she would hide under tables in the cafeteria, clinging to the table legs. The nuns grew strong from all of the times they had to drag her out, kicking and screaming. She used to come to my doctor’s appointments and leave the room when it was time for my shots.

When she was a teenager, she used to sneak out at night and go to the disco. When I was twelve she gave me an old pair of floral bell-bottoms she had tucked away years ago and I was able to wear them exactly once before I outgrew them. I still dream about those pants. I sometimes wonder why, when travelling across continents and oceans, those pants were one of the few things she saw fit to bring.

My auntie never married or had children. Despite her long line of potential suitors, she flourished in her career into her forties and never once settled down. When I was born, she packed up only the essentials (several bags of frozen vegetables, Italian leather shoes, and timeworn Armenian Bibles) and she came to America. She may have never had children of her own, but she had me.

If my grandmother was a woman of quiet strength, my auntie instead brings intensity. Even at her calmest, electricity crackles around her. She has a sharp tongue. There is no saying “no” to her. She is the burning white heat of the sun in a very tiny body.

When my grandmother passed away, she took over the dolma rolling and the pants sewing. At the beginning, almost every meal was served with a watery side of “well, it’s not as good as mom used to make.”

My mom lived through a civil uprising. I don’t mean she stitched up soldiers’ pants and waited by the window for her beloved Johnny to come home. We’re talking full-on blockading the classroom doors against nationalists with guns. We’re talking listening to the screams of her classmates when she should have been doing a keg stand or whatever rowdy youths did in the 1970s.

Those who know her now probably don’t believe me.

My mom is warm as honey. My mom is bright as sunshine. My mom has trouble following conversations because her mind is racing a million miles a minute. My mom loves Sudoku and Jeopardy! My mom plays the mandolin and likes to sing the wrong words to every song.

My mom does not carry her trauma on her back. She has lived a life of heartache and struggle and absolutely refuses to show it.

In old pictures, she could be a model. She was charmingly gap-toothed with a big strawberry blonde lion’s mane. Despite being only 5’2” she was absolutely statuesque. In an old photo of her in front of Ephesus I swear she’s more breathtaking than the monument. She laughed easily then, just like she does now.

In Turkish we have a word, “albeni,” a sort of allure or charm that draws you to someone. My mom has this. She has always had this. Regardless of her looks, she is dazzling. People want to be around her. They want to know her.

My childhood was joyful, and such a big part of that joy came from her. Every time we left the house we got lost, and it was our special tradition. There was magic in taking wrong turns. We didn’t go for walks around the neighborhood, we explored the jungle. Every night we had a grapefruit party on the living room floor that consisted solely of eating grapefruit. That’s it. She managed to make grapefruit special.

When she was a teenager she and a friend took a road trip from Istanbul to Barcelona. At the border of then-Yugoslavia, a series of bad jokes landed her in prison.

When she first moved to the United States her inability to master American slang led to a series of hijinks that I’m not allowed to repeat in polite company. Buy me a glass of wine and I’ll tell you everything.

My mom is like an old rubber-hose cartoon. Wholesome, clever, cheerful. Springy. I have never seen a smile as bright as hers. She is fearless, unafraid to dance in grocery stores or sit with strangers at Panera even when I beg her not to.

But she also has a melancholic streak. I inherited my woefulness from her, and my big, sad basset-hound eyes. She calls me at least once a week to confirm that I’ll take in my auntie if anything happens to her (even though she’s fit as a fiddle). She is always prepared for the worst. She needs to be best friends with everyone, and gets her heart broken easily.

In spite of this, she is a positive energy in every room. She is a tireless optimist and a force to be reckoned with. She is a survivor of epic proportions and I’m endlessly proud of her, even when she sings along with the music at the doctor’s office.

The Jayhawks – “Life Floats By”