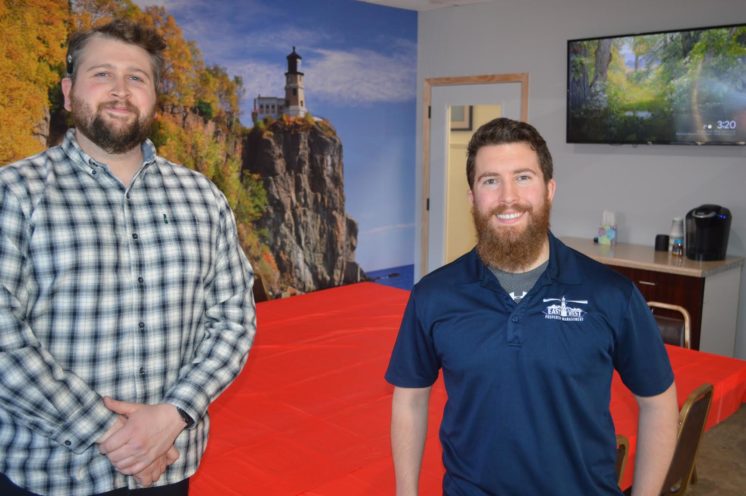 “We like the area,” said Rush. “It’s up and coming. Lots of good restaurant options. It’s easy to get to the rentals we manage and easy for residents to get here, it’s right off the highway.”

Hot new restaurants, trendy breweries and fashionable shops and galleries are getting all the attention, but Lincoln Park has a solid base of services and office jobs. The booming neighborhood is attracting more. The former BPL Plasma building, on the right, at 1720 W. Superior St. has been purchased and refurbished by East West Property Management. (Photo by Mark Nicklawske)

“A complete neighborhood has all kinds of services,” said Shannon Laing, director of partnership and development for Ecolibrium 3, an advocate for sustainable neighborhood growth. “It’s going to have people who can cut your hair, sell you insurance, fix your car. A lot of these businesses have been in the neighborhood already, and so seeing more of those complementary businesses is not a surprise. It’s actually a good thing to see.”

Rush and Alex Rogers founded East West Property Management in 2015 and had been located in a historic church building on East First Street in Duluth’s Endion neighborhood. The company operates more than 500 properties in Duluth, Superior, Cloquet and Hermantown.

“We’re really central to everything now,” said Rogers. “Once they get done with the can-of-worms it’s really going to open things up here.”

The Minnesota Department of Transportation will begin major reconstruction work on its three-year, $343-million Twin Ports Interchange project in Lincoln Park this spring. The project will rebuild the I-35/I-535 and Highway 53 interchange, known locally as the Can of Worms.

The interchange supplies Lincoln Park with its closest freeway access.

According to St. Louis County records, the building at 1720 W. Superior St. was constructed in 1924. The property served as a machine shop for decades and, in the 1950s, it briefly housed the Strand Candy Company. A boat and marine shop took over the space in the 1960s followed by a Goodwill store in the 1970s.

The building was used as a plasma center beginning in 1990.

“As soon as it gets warm enough to work outside, we’ll improve the front of the building and put up a new sign,” said Rogers. “We think the building will look great.” Rush said the company is looking to lease its old location, the historic Endion Methodist and Episcopal Church at 1830 E. First St. According to the Duluth history website Zenith City Online, the church was designed and built in 1909 by renowned Duluth architects William Bray and Carl Nystrom. The building last served as a church for the Prince of Peace Fellowship.

“If the right person came along and wanted to lease it over the long term we’d be open to that,” said Rush. “Otherwise we’ll continue to utilize it just for some storage basically.”

The space could work for a daycare provider or another church congregation, he said.

The nearly 10,000-square-foot, two-level building still contains its original fixtures, woodwork, and stained-glass windows. The former worship space has 35-foot-high ceilings and a balcony. It sits on a corner lot with off-street parking for 70 vehicles.

“You could even have something really cool like a restaurant or a brewery or a tap room, if the right person came along,” said Rush.

MinnPost asks: “Is Duluth in the Rust Belt?