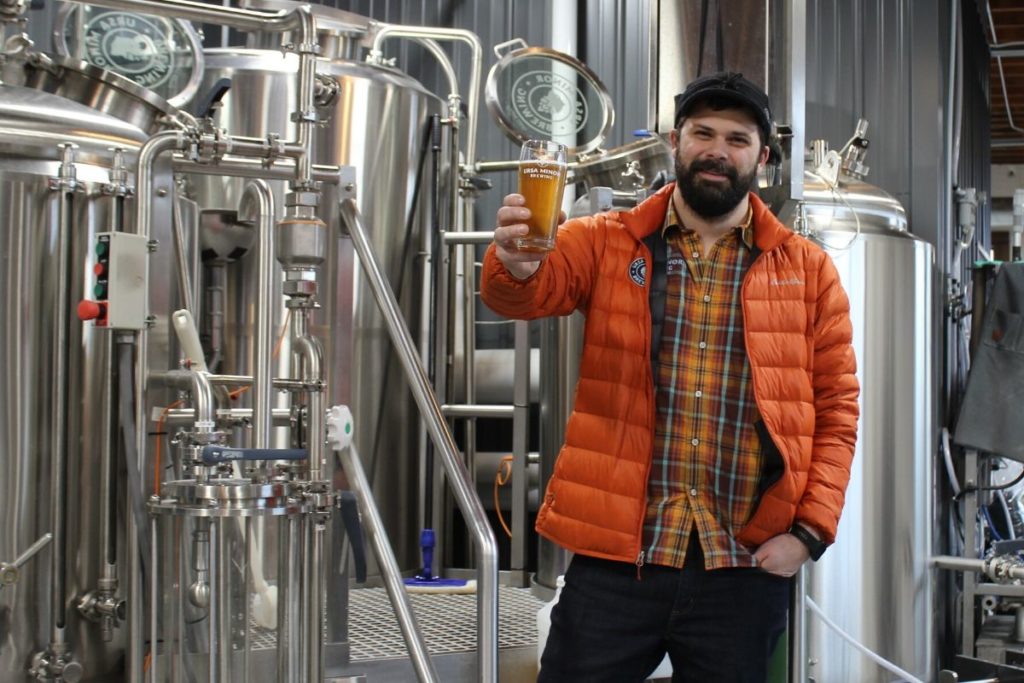 CEO Ben Hugus notes that the brewery has had customer requests for NA beer ever since it opened in 2018. The plan was to start by offering one NA beer in the taproom at 2415 W. Superior St. to test the market.

Making a tasty non-alcoholic version of beer that will satiate craft-beer aficionados isn’t simple or cheap. “If it was easy, everyone would be doing it,” remarks Hugus.

Ursa Minor is partnering with ABV Technology to make it happen — three kegs at a time. The St. Paul-based company developed a system to remove the alcohol from fermented beer. “We bring them beer brewed the normal way and they essentially filter out the alcohol,” explains Hugus.

Two outputs are derived from this painstaking process, and both are drinkable. One is a clear liquid with a similar alcohol by volume to the starting brew. The other malt beverage retains most of the color and flavor of its original brew but has been stripped of nearly all the alcohol (it weighs in at 0.5 percent ABV or less).

The former will be used as a base for an Ursa Minor alcoholic seltzer in the near future, according to Hugus. But first they’re experimenting with flavors. The plan is to use real fruit, rather than extracts, for flavoring as they do with beer.

Inclusivity and an Untapped Market

Having NA options is a smart business decision, since market share is swiftly growing for non-alcoholic beverages. Beyond the obvious reasons for alcohol abstention like pregnancy and recovery, people are forgoing booze (or drinking less) for all kinds of reasons these days, from weight loss to better productivity or safer driving.

A “sober movement” backed by books, events and social groups has been building. Jes Henkes started Sober Duluth as an Instagram account last fall. She began with daily posts during “Sober September” as a way to connect with local non-drinkers.

“I thought, ‘If I’m going to be sober I have to find a community,’” she says, noting that she’s not religious and doesn’t identify with the typical 12-step program for sobriety.

Henkes started by setting casual meet ups with the folks she met through Sober Duluth for coffee or walks by the lake. Now the sobriety collective has exploded beyond her expectations. In the short term, she started an LLC and is organizing pop ups around town. You don’t have to be sober to attend, only sober-curious (and not currently under the influence). In the long term, she is planning to open an alcohol-free establishment.

Ursa Minor’s NA beer has been available at recent Sober Duluth events. Hugus points out that Ursa Minor strives to be inclusive by offering community events and beverages that appeal to all potential customers.

“How to include more people on our adventure is always at the forefront of our minds,” he says. “Craft breweries are not exclusive — at least not ours.”

I Demand a Lakewalk