MnDOT scales back Can of Worms project 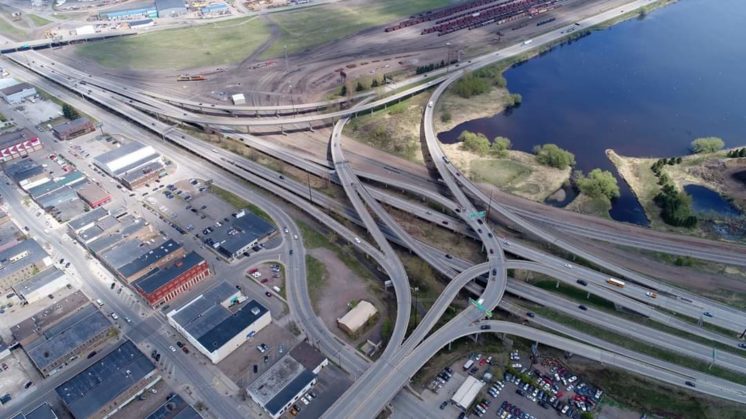 State officials will announce dramatic reductions in a major state highway project that was intended to improve driver safety, traffic flow and heavy load shipments through the heart of Duluth.

MnDOT Assistant District Engineer for Major Projects Pat Huston told a meeting of Main Street Lincoln Park that both the Garfield Avenue interchange near the Blatnik Bridge and the Highway 53 viaduct north of Interstate 35 have been removed from the three-year construction schedule. Instead, construction will focus on the I-35/I-535/Hwy 53 interchange, also known as the Can of Worms. This Minnesota Department of Transportation map shows original plans for the three-year Twin Ports Interchange construction project. Component 2 and Component 3 have been deferred from the existing project.

“We’re going to announce on Monday, but we wanted this group to hear it first because it really impacts this neighborhood,” Huston said at the meeting. “This will be difficult for everyone.”

The Twin Ports Interchange project was announced in April 2016 with an original budget of $240 million. According to MnDOT plans, the project is intended to “enhance safety by eliminating blind merges and left exits, replace aging infrastructure, and better accommodate freight movements through the interchange next to the Clure Public Terminal.”

The Can-of-Worms was designed more than 50 years ago and construction on the interchange was completed in 1969. The project area includes 35 bridges nearing the end of their design and service life and 12 weight restricted connecting ramps, said a MnDOT report issued in January 2019. The Highway 53 viaduct over Lincoln Park was completed in 1972 and at least one of its six concrete box girder bridges is listed in “poor” condition with abutment and girder cracks.

“U.S. Hwy 53 is a critical freight route to northern Minnesota for the timber industry and taconite (iron) mines,” said the report. “These cracks are a major concern for the future capacity of the bridge.”

MnDOT engineers have been working on overall roadway layout designs and environmental evaluation in the construction areas since late 2017.

Huston said an extensive amount of soil and water samples have been taken from the ground under I-35/I-535 interchange. The testing revealed unexpected and unfavorable conditions.

“It’s like when you remodel your house,” he said. “You rip out drywall in the kitchen and find all kinds of things that weren’t supposed to be there.”

Huston said a large amount of hazardous contaminants were found in the area along with construction debris that was used as fill material. In addition to a freeway corridor, the area has been a major railroad thoroughfare dating back to the 19th Century.

Houston said another issue driving costs higher than expected is a rerouting of Coffee Creek. Both Coffee Creek and Miller Creek dump into the St. Louis Bay a few hundred feet southeast of the Can of Worms. Both waterways were channelled underground decades ago and engineers need to replace and reroute that infrastructure.

MnDOT estimates all of its federal and state money — some $343 million — will be used for the I-35/I-535/Hwy 53 interchange and I-35 work between 27th Avenue West and the Mesaba Avenue / Superior Street exit. The project completion date remains 2023.

Work on the I-535/Garfield interchange and the Highway 53 viaduct will be rescheduled when officials locate additional funding.

Shannon Laing, director of partnership development for Ecolibrium3, an organizer of the Main Street Lincoln Park group, said project changes will present challenges to the neighborhood. Lincoln Park sits adjacent to the Can-of-Worms interchange and under the Highway 53 viaduct, which provides resident and business access to I-35 and Miller Hill.

“There are a lot of pieces of this that are kind of disappointing,” she said. “It’s going to extend and/or put the neighborhood through a completely separate long-term construction project. The area is gaining some traction now and we certainly don’t want to derail the hard work that has been done so far.”

MnDOT wanted to complete all three components of the Twin Ports Interchange project in the three-year construction window to reduce the effect on Lincoln Park. Highway 53 viaduct reconstruction deferment means the neighborhood must endure another disruptive, multi-year project when it is rescheduled, said Laing.

Meanwhile the unsightly, substandard and dangerous viaduct will remain a major part of Lincoln Park.

“From and aesthetic and usefulness point of view, the longer it goes being weight restricted that’s still a lot of traffic on our city streets and damaging our infrastructure,” said Laing. “In the end it’s going to cost more than it needs to.”

Huston said it is unknown when the state will reschedule the two final components of the Twin Ports Interchange project. He said much of it depends on finding the needed funding. He said the two components could become candidates for state bonding money. https://youtu.be/E--NHKT4F8M If Duluth's views are breathtaking from ground level, wait until you see them from up high. Refresh you eyes...