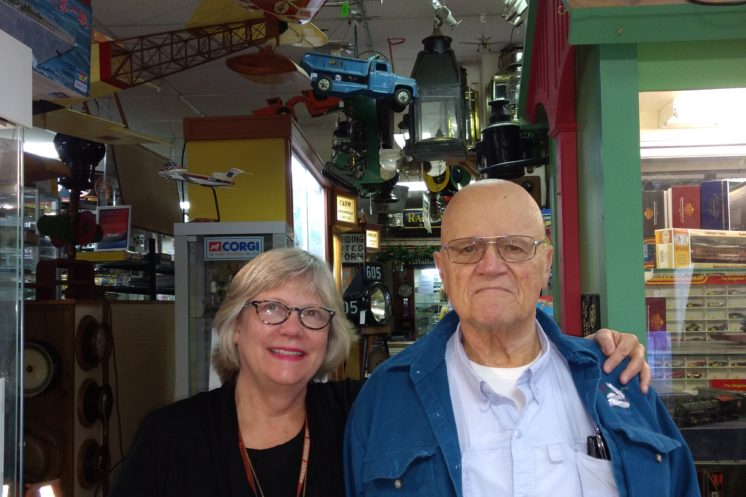 Beth Petrowske, left, and Jack Carr pose inside Carr’s Hobby Shop in Lincoln Park. Petrowske is buying the hobby shop building and will convert it to Boathouse Treats & Treasures.

A new store featuring a quirky assortment of vintage clothes, rare collectibles and usable curios will replace one of the oldest and most storied businesses in Lincoln Park early next year.

Petrowske said the new shop will be similar to an occasional store she and her husband, Mark, operated out of a garage at their home on North Shore Scenic Drive.

“It was a single car garage but it looked just like a little, old boathouse,” she said. “We fixed it up and made it into a little shop and I just opened the doors — I work full time — when I had a weekend or whenever I took a day off.” 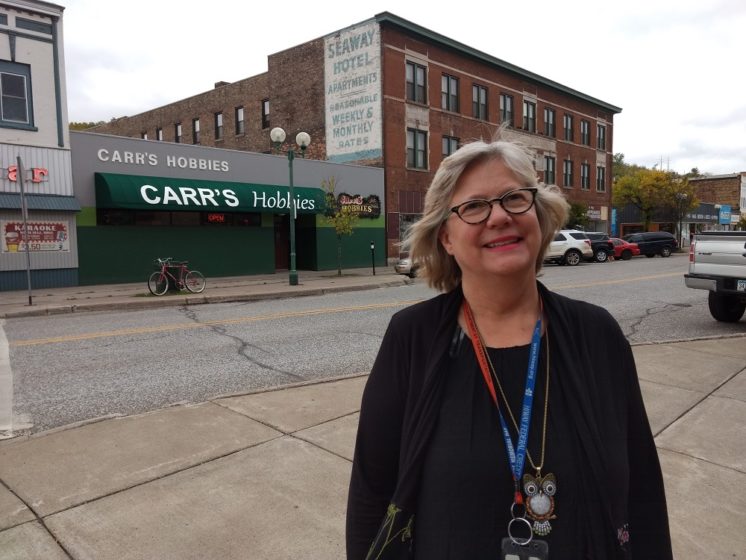 Beth Petrowske and her brother Mark Pettersen have a purchase agreement for 2009 W. Superior Street, the longtime home of Carr’s Hobby Shop.

Petrowske has worked at the Minnesota Department of Transportation for 32 years, mostly as a graphic designer. She transferred to Duluth eight years ago and currently serves as a MnDOT public affairs coordinator. Petrowske plans to retire in December.

The retirement means more time to start her dream store.

Boathouse Treats & Treasures will be owned by Petrowske and her brother, Mark Pettersen of Williston, N.D. Unique items from their large and varied collections will make up the inventory. For example, Pettersen recently purchased two buildings full of jukeboxes, arcade games and bar signs. Petrowske has collected used books and sold vintage wool clothes for years.

Carefully selected original art will be sold on consignment and some large display items like a 1926 popcorn truck will give shoppers a gallery and museum experience, said Petrowske.

“We’re gonna have some neat stuff in there,” she said.

The store will also stock locally-produced, ready-to-eat snack foods and juices that could be purchased for later consumption at home or in Lincoln Park breweries and taprooms.

But the focus will be on the old and unusual.

“It’s my dream. I love old stuff,” said Petrowske. “If I had a mission statement it would be: I hope people find this place to be a fun and comfortable place to hang out for awhile. There’s going to be many interesting things to look at and I hope people come back again and again to see all the new things.” 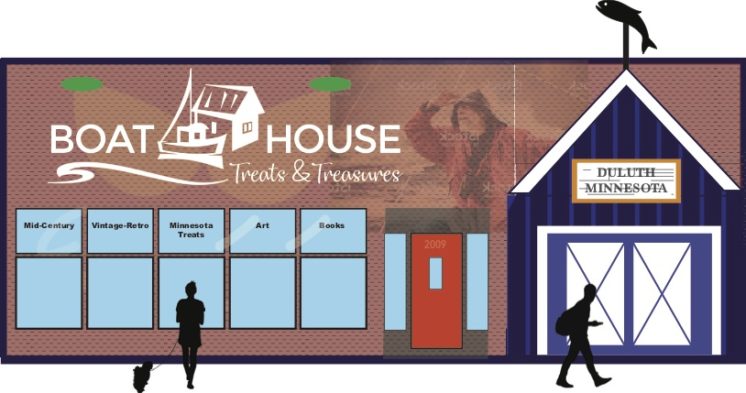 The Carr’s Hobby Shop building will get a facelift when Boathouse Treats and Treasures opens next spring.

Petrowske and Pettersen plan to close a purchase agreement on the Carr’s Hobby building in January. They will put an estimated $100,000 into building changes and improvements — including a new roof. The property was constructed in the 1940s and served as the Johnson furniture store. It later became a wholesale clothing distributor in the 1960s. 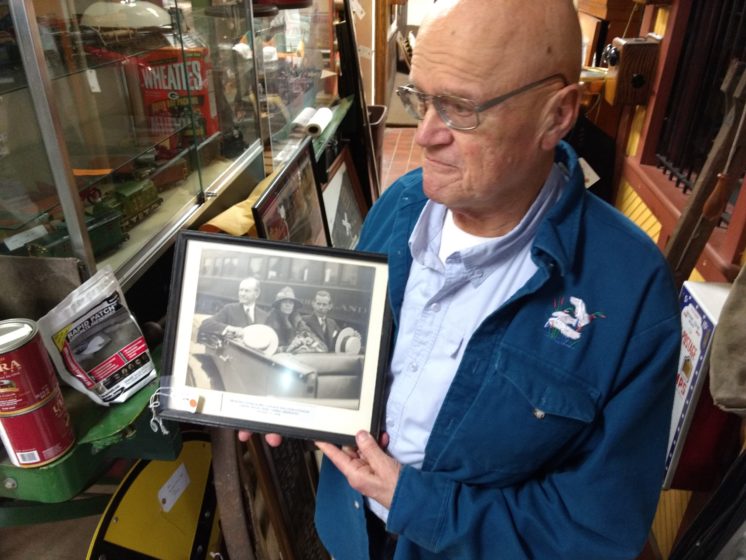 Jack Carr holds a photograph of President Calvin Coolidge, part of the Carr’s Hobby Shop collection. Coolidge visited the Twin Ports and the Iron Range in 1928.

“I could see the Menard’s coming along and the Home Depots, these big chains,” said Carr. “I figured: ‘I ain’t going to compete with them, they’re going to bury me.’ So I threw out the hardware and we changed to hobbies.”

Carr’s Hobby Shop features a 4,500-square-foot sales space jammed with everything a basement hobbyist would ever need and more. Planes dangle from the ceiling, a model train scene fills a back room, shelves are piled with model car kits and transportation antiques and art are displayed throughout the store.

Over the years, the shop has become a museum as much as a store. 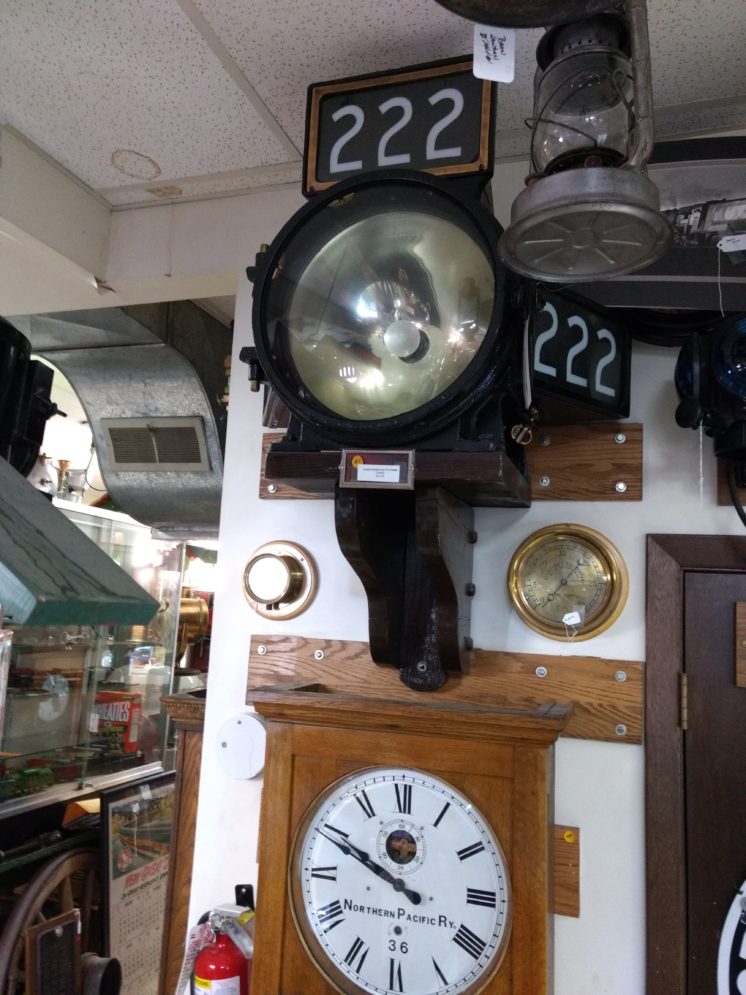 An old Northern Pacific Railroad clock, below, and the front headlight of a steam train, above, are part of the Carr’s Hobby Shop antique collection. The two pieces will be auctioned off Oct. 26.

A scale model of the doomed Edmund Fitzgerald ore boat, assembled by Carr, greets customers at the front door. A front headlight off a working steam train hangs on a back wall. Display cases are jammed with railroad memorabilia and antique toy trains.

But it all will be gone soon.

Carr’s Hobby Shop is currently being dismantled. Unsold inventory and the vast art and antique collection will be auctioned off Oct. 26 through a Nordic Auction online event. More than 1,000 lots will be sold during the proceedings.

Carr, 79, said he is eager to retire but he knows the store closing is difficult for others. The hobby shop is among the last of its kind and draws customers from all over the midwest.

“I’m not going to miss it at all,” he said. “I can do whatever I want now … And we’ll let (Petrowske) do whatever she wants. She can do her thing, and maybe she will be here for 50 years.”

Matthew Dressel is a Duluth filmmaker, screenwriter and movie enthusiast. He has served as host and festival director to the...