Proctor DWI chair, where are you now? 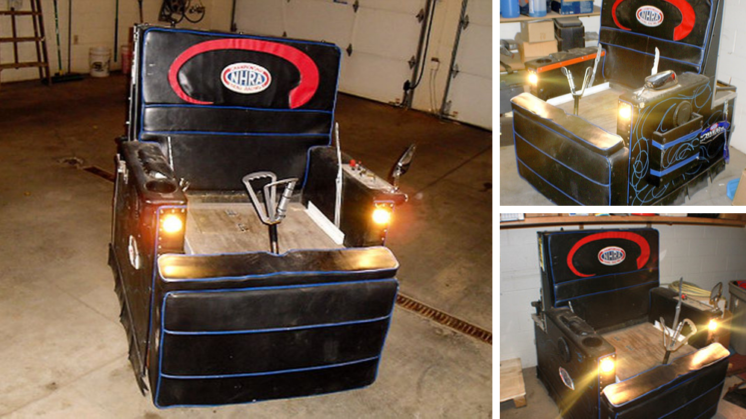 Ten years ago — Oct. 19, 2009 — Dennis LeRoy Anderson pleaded guilty to driving a motorized lounge chair while under the influence of alcohol. The incident happened more than a year prior — on Aug. 31, 2008. Anderson hit a parked vehicle while driving away from the Keyboard Lounge in Proctor.

From the Duluth News Tribune:

According to the criminal complaint, Anderson drove his motorized chair into a vehicle parked near a Proctor bar. Anderson told police he was traveling from the Keyboard Lounge after consuming approximately eight or nine beers. His blood-alcohol content was measured at 0.29 percent, more than three times the legal limit to drive.

Anderson claimed he was driving the chair fine until a woman jumped on it and knocked the chair off course. He has one prior DWI conviction. He couldn’t be reached for comment Wednesday.

Proctor Deputy Police Chief Troy Foucault said the chair was powered by a converted lawnmower with a Briggs & Stratton engine. It has a stereo, cup holders and other custom options, including different power levels.

A National Hot Rod Racing Association sticker is posted on the chair’s head rest. The chair had a small steering wheel, about a third of the size of a golf cart’s, coming straight up from the middle of the La-Z-Boy.

Proctor City Prosecutor Ronald Envall said he charged Anderson under the portion of Minnesota law that makes it a crime to operate a self-propelled motor vehicle while impaired by alcohol or drugs. He declined further comment.

Ten days after the guilty plea, the Proctor Police Department put the chair up for auction on eBay. Most news accounts had referred to the chair as a La-Z-Boy, and the eBay listing also contained the brand name. Bidding on the chair climbed to $43,700 before corporate officials from La-Z-Boy notified the PPD that the chair was not from their product line and asked that the description be changed.

The second listing on eBay failed when the winning bidder backed out of the purchase. The chair was finally sold to a Duluth-area resident who placed the winning bid of $3,700 in an auction that closed on April 20, 2010.

Again, from the Duluth News Tribune:

The winning $3,700 bid for the chair came from a resident of the Duluth area, said Bart Kyte, sales manager of Oberfoell Auctioneers, the Mountain Iron business that orchestrated its sale. He declined to disclose the identity of the top bidder, but Kyte said 15 interested parties were actively engaged in the auction at www.Do-Bid.com.

In advance of the auction, the PPD released the YouTube video above.

Five days after the auction closed, this video showed up on YouTube with the claim that it’s the DWI chair’s “first drive with its new owner.”

https://www.youtube.com/watch?v=9HISjj0ycTI Candidates for Duluth municipal and school board positions spoke about their platforms in anticipation of the Nov. 5 General...