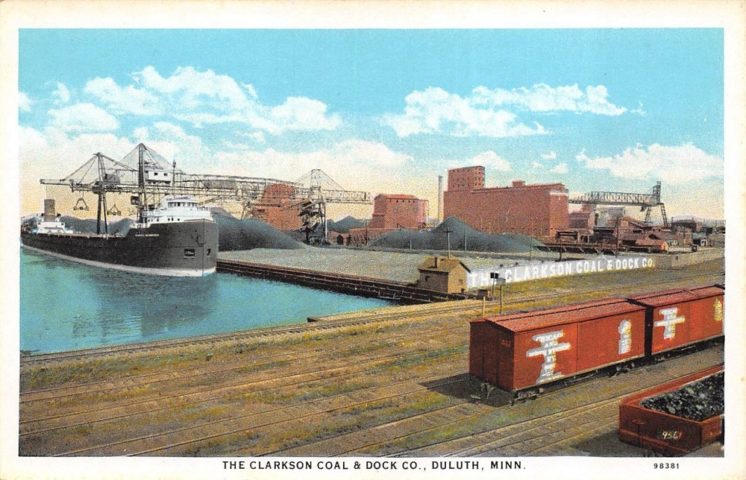 This undated postcard, published by the Duluth Photo and Engraving Company, shows the Clarkson Coal & Dock Company on Duluth’s waterfront.

Founded by Worrell Clarkson, the St. Paul-based company stored and sold coal from docks in Duluth and Ashland. A description of the Duluth dock, below, is from a 1933 Minnesota Supreme Court Case.

The respondent owns a dock in the city of Duluth upon which are located three coal bridges which perform all of the work of handling coal on the dock. They unload the coal from the vessels by means of clamshell buckets ranging in capacity from three to six tons to the load. The buckets are handled by electrically operated cables, lifted to the carrier, and the carrier runs to any desired point on the dock; the bridge itself also moves from one point to another. The area of movement ranges from 1,200 to 2,000 feet. The bridges are also equipped with machinery for sorting the coal into its various sizes for the retail market. A rather lengthy feature about Clarkson Coal & Dock Company appeared in volume 51, issue 3 of The Black Diamond, a weekly coal industry periodical. The publication is dated July 19, 1913. The article appears in pieces below, which can be clicked on to view larger.