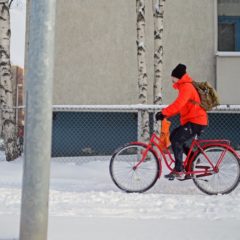 Check this out. I came across this article in The Guardian written by a cycling advocate from Winnipeg. It’s a few years old now and you’re probably done with any mention of winter but it seems timely what with it being just a few days after National Bike to Work Day.

I don’t know how many of you read this Op/Ed piece in the Duluth News Tribune:

Though written on behalf of St Louis County, the focus is on greater Duluth and the writers are trying to convey the good work they are doing to improve multi-modal transportation on county roadways. But “balance” is clearly lacking in the content. A few assumptions need to be challenged. Cycling for some is not a preference; it’s a necessity. Another is the conspicuous absence of public transport as a mode for getting around, in this case the DTA bus. A third assumption, one that is implied, is that cycling is and will remain a seasonal activity — hence the bike lanes planned for Woodland Avenue.

Bike lanes are invisible under a blanket of snow and I wonder if dedicated lanes are more hazardous in snowy conditions when the cyclist is more apt to be aware of their space and thus assert their road occupancy at the expense of safety among motorists who can’t see the bike lanes and don’t know they exist.

The “super sidewalk” on lower Rice Lake Road sounds like a better option for Woodland Avenue.

A separate parallel roadway is what is needed for safe cycle routes and that should be accompanied by legal enforcement of rules and regulations for all vehicle operators — including cyclists.

The St Louis County roadways referenced lay within the city limits of Duluth and Hermantown and overlap with the jurisdiction of the Duluth-Superior Metropolitan Interstate Committee. I believe the city of Duluth has signed up to a “complete streets” mandate.

It’s time these entities pooled their resources and came up with a comprehensive, legally binding cycling plan.

https://www.youtube.com/watch?v=RAWeVSaQcB0 Duluth birder Richard Hoeg captured this video of twin great horned owls in the Lester Park area. On his...