Monahan listed the building for sale in February, telling the Duluth News Tribune he wanted “to explore what the market would bear.” He had laid off staff in 2018, a move he told the DNT was amid “rather intense financial distress.” 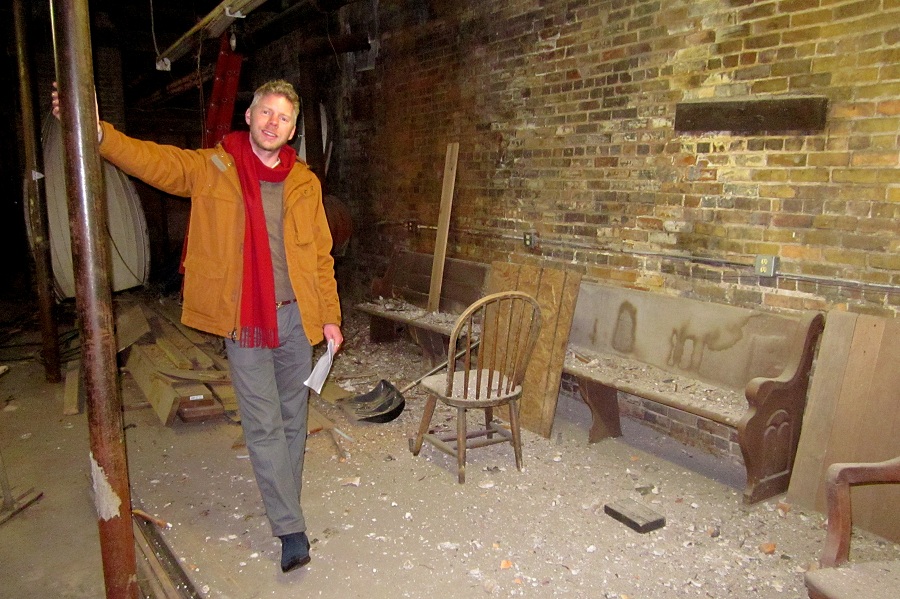 Bob Monahan stands inside the former Rocket Bar in February 2013 before the space was renovated to become the Red Herring Lounge.

On March 11 Monahan posted on Facebook in response to rumors of sex trafficking related to the Red Herring, saying he did not believe “an actual sex trafficking ring” had “set up shop in or around the Herring,” and he doubted such a thing could happen without his knowledge.

“Just because you aren’t aware of something, doesn’t mean it isn’t happening; AND signs of sex trafficking can be difficult to detect,” Monahan wrote. “The fact that SOMETHING has occurred and we have been made aware of it means that we have a responsibility to address it and DO something to ensure that it doesn’t happen again.”

Monahan wrote that he would work with local agencies to “execute a plan to further ensure the safety and comfort” of patrons. “As a small business owner in a relatively small community, this is an extremely delicate (and potentially damaging) situation, and I’m TRYING to do the right thing for the betterment of the community (NOT just my reputation),” he wrote.

Red Herring Lounge opened in June 2014 at 208 E. First St. — the site of the Rocket Bar from the 1940s to ’70s. A three-day grand opening event included live music by 16 bands. In the years that followed the stage was occupied by local bands mixed with Twin Cities artists like Hippo Campus and Gramma’s Boyfriend and nationally known acts like Buckwheat Zydeco, Aaron Carter, David Liebe Hart and the Bad Plus.

The property (currently-operating bar business is an additional consideration) that houses the Herring is FOR SALE (listing below) and has recently been reduced by $10k: deal time! In case you or someone you know is looking for a solid home for their new business venture. Or, you/they can try your/their hand at bar ownership! Your very own turn-key bar and music venue is just an additional consideration away. Yay!

A couple of extremely pertinent side notes:

The Duluth Homegrown Music Festival is fast-approaching! As much as it pains me to say it, due to “concerns over the building’s sale listing,” we are no longer a Homegrown venue (OOF) this year. As I am whole-heartedly committed to the scene, the Herring is planning to throw a couple-few “unofficial” parties, this likely being the Herring’s last HGMF in business.

Yes, friends and frenemies, it’s true. Building sale or no sale- and, barring some sort of wildly unforeseen circumstance- our beloved Herring will close its doors permanently on June 10th, 2019; five years to-the-day from when it opened.

It has been a WILD RIDE to say the least…a ride I would not like to continue to ride, at this point. Bar ownership (throwing parties for a living) a young-person’s game. If I was making a bunch of money, I’d hire someone to run it, make appearances at all the big shows, give a bunch of high fives and back pats, and maybe jump behind the bar for a hot minute…YEE HAW.

Unfortunately, that (making money) is not the case, and never really was. There are PLENTY of reasons for this, many related to my own deficiencies as a business owner.

Yes, I have learned many, many lessons the hard way.

At this point, the stress of being broke, and on top of that, owing a bunch of people/businesses has gotten the best of me. It’s no way to live, people! Time to cut my losses and move on to bigger and better things (*AHEM* Hostel du Nord).

All that being said: I have ZERO regrets- only a damn fine (and pricey) education and a TON of crazy, amazing memories (some more vivid than others)- to show for it.

And just how do you think the Red Herring is planning to go out, hmm??

With a BANG, of course! Stay tuned right here for birthday/farewell festivity deets!

I love you, Duluth!

The 21st annual Homegrown Music Festival is just a month away. The 100-page Field Guide, with all the who/what/when/where/why was...