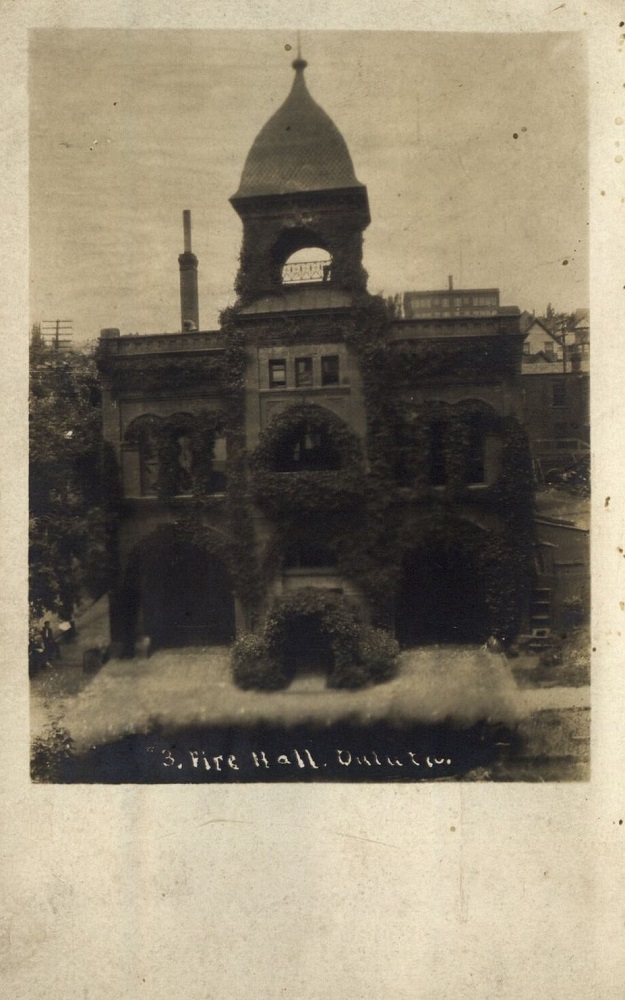 This undated postcard shows Duluth Fire Department Engine House #1 at 101 E. Third St., one of the first fire houses in the city of Duluth. It has been listed on the National Register of Historic Places since 1975.

The description on the nomination form for the National Register reads:

The fire hall was designed by noted Duluth architects Oliver G. Traphagen and Francis W. Fitzpatrick. The structure was erected by the City of Duluth in 1889 in a modified Romanesque style. The two and one half story red brick and sandstone building measures fifty feet long by ninety feet wide with walls extending thirty feet high.

The Third Street facade and the First Avenue East side elevation door and window openings are uniform and balanced. All window and door openings are Romanesque style arches, except for the three attic windows on the front facade. On this facade the voussoir arches are composed of sandstone on the first floor and brick on the second. Sculptured capitals on the pilasters are located on the first floor. On the second floor is a loggia with a projecting elliptical balcony and wrought iron railing. The tri-angular portions above the second floor loggia have sculptured panels depicting crossed fire horns. A corbelled brick cornice is surmounted by a brick parapet finishing the top of the building and the central bay of the front facade projects slightly outward from the front elevation. The First Avenue East, south side elevation, contains two stories of brick voussoir arches with deeply recessed windows. Terracotta banding is visible on the second floor. Above the central bay is a curvilinear pediment with a sculptured date stone bearing the date 1889 A.D. The north and west sides of the fire hall are of no distinctive architectural styles. [In 1960, a second floor wooden causeway was built between the fire hall and the adjacent building to the north.]

The round arched observation deck with wrought iron balastrade, surmounted by an ogee dome, capped by a flag pole was removed from the fire hall and the sixteen foot chimney was lowered.

The interior of the structure is finished in pine and maple woods and the original double staircase remains in the building. All original equipment related to the fire department has been removed including the four brass fireman’s poles. The circular holes of the shoots are still visible in the first floor ceiling, but have been boarded over on the second floor. Original door moldings and wainscoting still remain in the building.

Fire Department Number One is significant as an historic and architectural representative of an early institution which figured prominently into the history of the village and later the City of Duluth.

The volunteer fire unit was organized during the fall of 1870 to protect the village of Duluth. In the 1880s this organization developed into a part-paid fire department. During the latter part of 1889, this part-paid unit evolved into the city’s present full-paid fire department. It was at this time that Fire Department Number One was constructed from the architectural designs of Traphagen and Fitzpatrick. In 1890 two additional fire stations were constructed bringing the number to four stations available to protect the City of Duluth. The fire department had a total of 61 men who manned two steam fire engines, three chemical engines, two hook and ladder trucks, three hose wagons, other miscellaneous equipment, and twenty-four horses in active service that responded to the 118 alarms in 1890.

The fire hall was the first brick structure erected by the city fire department and it remained the pride of the department until the new headquarters at Sixth Avenue West was constructed. After the city erected the new headquarters, Fire Department Number One was converted to a public works facility. In 1950 the Board of Education, present owners, took it over for use as a maintenance shop.

Fire Department Number One represents the period of transition of Duluth’s fire protection agency from a volunteer fire unit to the present full-paid fire fighting department and is an architectural representative of the fire halls of Duluth which stood in the last decade of the nineteenth century. At the time of the National Register application, the building was owned by Duluth Public Schools. It was used as storage space and referred to as the Facilities Management Building. By the turn of the millennium the school district had shifted its use to administrative office space.

In 2012, the school district sold the building for $500,000 to Fire House No. 1 Limited Partners, and within a year Twin Cities-based MetroPlains Partners remodeled the space as part of a multi-building housing development called Firehouse Flats.

The project received an award from the Duluth Preservation Alliance in 2013. https://www.youtube.com/watch?v=-rlaAQrUFLI Forty years ago the Hemlock Garage at 302 E. First St. collapsed under the weight of snow. WDIO-TV news...