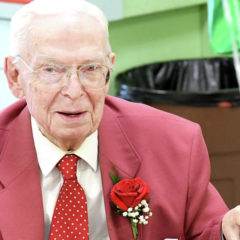 Martin began his career at WEBC Radio in the 1930s and transitioned to television in the 1950s. The Telegram reports “his first television broadcast came from the two-car garage that served as a makeshift studio beneath a transmitter. He served as an anchor at WDSM Channel 6 — later KBJR — for 16 years.”

Wisconsin Public Radio will rebroadcast an interview with Lew Martin about his reflections on his broadcasting career on Friday, Feb. 22, at 6 p.m. The roughly half-hour program will be followed by an episode of Radio Superior. Martin was a regular feature of the old-time radio drama that airs weekly on 91.3 KUWS-FM.

Martin recounted his experiences two years ago when he turned 100 years old on the Wisconsin Public Radio program Hear Me Out. During the interview, the Twin Ports media icon recalled the early days of radio in Duluth and Superior.

The program will be broadcast on WPR station 91.3 FM in Superior. A copy of an extended interview with Lew Martin can be found online at wpr.org.

This undated postcard, published by Gopher News Co. of Minneapolis, has the following text on the backside: A novel attraction...