A little blue sauna on a trailer began popping up around Duluth late last year. The Hiki Hut has licensing similar to a food truck, but instead of food it’s serving up nourishing doses of heat and steam. Owners Whitney and Kelby Sundquist aim to encourage sauna appreciation as well as cultivate community.

When the Sundquists moved to Duluth from North Dakota three years ago, they wanted to find fun activities, especially ones that could help them enjoy Duluth winters.

They were introduced to the Twin Cities’ 612 Society, a sauna cooperative that provides mobile sauna sessions for its members and the general public. After that first sauna experience, they were hooked.

As busy professionals, they found the physical and mental health benefits appealing. “At the end of the week when you’re stressed out, it’s a great form of relaxation,” Kelby says, adding that the body’s physiological response to a sauna is similar to a cardiovascular workout in terms of increased circulation and elevated heartbeat. “When you’re done, you feel a lot better.”

Saunas became a bit of an obsession for the couple. They decided they wanted to build one and also share the joy of saunas with others.

“We thought people in Duluth would love it — it seems like a very Duluth thing to do,” explains Whitney.

They started to research the sauna experience, trying out different hotel and gym saunas in the area and learning from fellow enthusiasts and sauna builders.

“Even though we were new to it, we found the community so unpretentious and welcoming,” says Whitney.

Kelby says they liked the idea of a mobile unit that could be transported around to various scenic spots in the area. They found a used fish house, bought it and got started gutting and renovating it. The process, including research, took about a year.

They consulted with Superior Sauna and Steam in Ashland on the design. The result incorporates elements of a traditional Finnish sauna. “Hiki” is the Finnish word for “sweat.” The Hiki Hut features a wood-fired stove, which you can throw ladles of water on to create “löyly” (steam).

In a departure from tradition, they opted for a mix of lighter colored wood and installed windows and a glass door to incorporate sunlight. Also, sauna-goers are required to wear bathing suits.

A solar panel on the roof provides electricity for additional light and powers a radio. “We didn’t want to be limited by having to plug in or have to bring gas to power it,” says Kelby, noting it’s sustainable and fossil fuel free, plus has off-grid capabilities that open up more opportunities for pop-up locations.

The Duluth Winter Village at Glensheen in December was the Hiki Hut’s first public foray. The sauna was parked conveniently close to Lake Superior. With gale force winds and raging waves, the Sundquists wondered how the mobile sauna would be received.

It was a surprisingly successful trial by fire. Participants took successive blasts of hot steam and darted down to the frigid lake to cool off, often giggling along the way, according to Whitney.

Since then, the sauna has had public events at Ursa Minor Brewing, Brighton Beach and Park Point. At the late December Park Point pop up, several brave souls made their way over the dunes for a dip in Lake Superior. Others opted to cool off outside, steam rising from their bodies. All seemed to agree that it was a rejuvenating ritual. 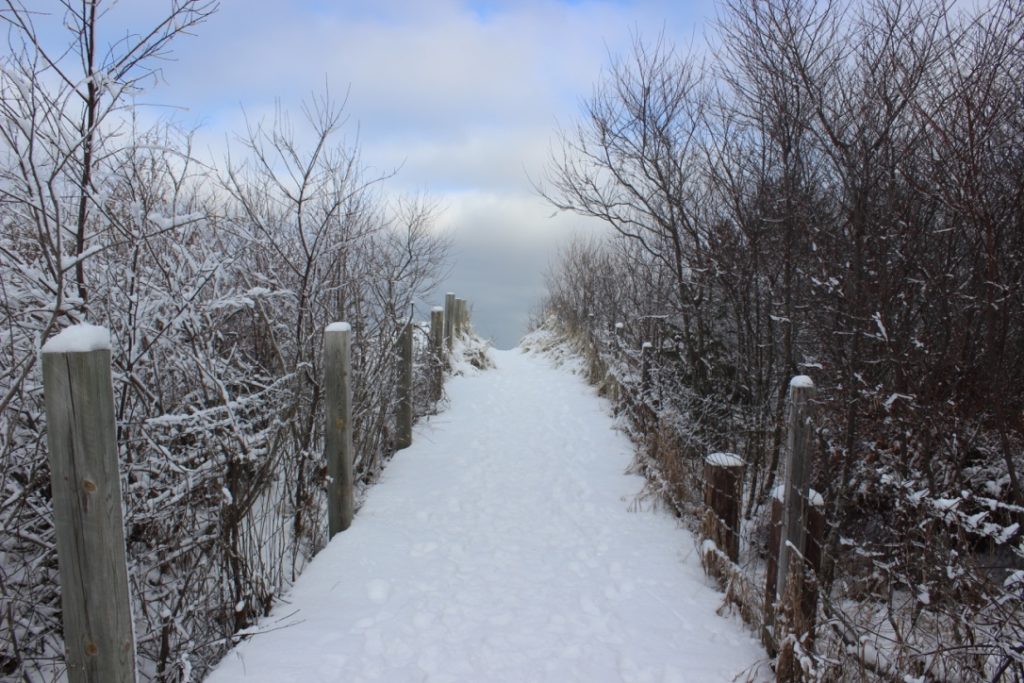 In the last week of January, the Sundquists are hauling it across the bridge to Barker’s Island to augment the Lake Superior Ice Festival’s slate of wintery festivities. They plan to cut a hole in the ice to enable a true polar plunge experience.

They’re scoping out locations for February and beyond and suggest they might choose a spot near an area cross-country ski trail in the future. The Hiki Hut is mainly a pop up for now, as the Sundquists are professionals with full time jobs. They’re aiming for bimonthly public events.

The couple is excited to see the enthusiasm in the community for the project. They agree that one of the positive outcomes has been witnessing the diverse range of people who have participated so far and the connections people are making with one another.

The sauna hosted doctors, students, professors, adventurers and more. Some participants are familiar with the sauna ritual and some are not. The Sundquists are on hand to educate newbies on how to make the most of the experience.

Whitney notes that she’s been heartened to witness the conversations and connections sparked by the sauna setting. “It’s people that would never probably meet,” she says. “But in the sauna inhibitions are down … It’s so encouraging.”

Watch the Facebook page, website and Instagram for event details. Sessions are be booked via the MindBody app that many area yoga studios use in the area. It’s $12 for an hour and $16 for 90 minutes. The sauna is also available to rent for private gatherings at a cost of $200 (for set up, take down and staffing) plus $50 for every sauna hour. The Hiki Hut at Park Point – Photo by Lissa Maki

Test your art smarts with this quiz, which explores the murals of Superior. Murals in Duluth were explored in an...