Amber Burns is a true advocate for the arts. She has worked as a dancer, choreographer, painter, teacher and is now Artistic Director of the Duluth Playhouse Family Theatre. This week she talks about her love of many types of expression, and how she builds the work of other people as well as the many disciplines of her own.

AB: When I think about my medium I more like to think about what I love to create, which is visual movement, whether it is through my choreography, directing, through sculpture or on a canvas. Sometimes my medium is paint and sometimes it is physical bodies. I am a dancer, actor, director, choreographer, and visual artist. When I was just three years old I started dancing at a studio in Chanhassen, Minnesota and when people asked me what I wanted to be when I grew up I said, “I already am a dancer!” As I got older I developed passions for many other things, including drawing and painting. When it was time to pick a career and go to college I decided to b become an art teacher, and graduated from UMD in 2011 with a BFA in Art Education, all the while I was still dancing and teaching dance classes. At UMD I also received a minor in dance, and this is where I was introduced to the theater world. Many of my friends in the dance classes at UMD were theater majors, and one day, back in 2010, they were looking for dancers for a production of Who’s Tommy at Renegade Theater, so my friends signed me up to audition. I had no idea how to sing or act, but I could dance! I ended up being cast as a dancer in the ensemble and also Young Tommy, my first theater role! From then I was hooked and the next thing I know I am fully immersed in the Duluth theater community. Amber Burns as Young Tommy in Renegade Theater’s production of the Who’s Tommy, 2010.

After college I got a job teaching art at Marshall and while I was there I realized that although I loved teaching, I also was very passionate about advocating for the arts and developing the arts. I fell in love with the thriving arts scene in Duluth. I wanted to do more than be an artist, I wanted to help build the arts culture in this city. I was passionate about the visual arts and the performing arts. I joined the Arrowhead Regional Arts Council Board in 2016 and finished a masters degree in Liberal Studies: Arts Development and Program Management from the University of Denver just this year, which helped me understand that an administrative job in the arts would allow me to combine my passion for advocacy, management, and creation. I recently took the job of the Artistic Director of the Duluth Playhouse Family Theatre in June 2018, and I am loving every minute of it! I get to create choreography, direct, teach classes, and I still have some time to paint as well. When I first started to choreograph for theater I found it to be more challenging than just creating a dance. I discovered that musical theater dance is more than crafting beautiful forms with technical procision. Above all, musical theater choreography must move the text forward and tell the story of the production. The choreographer must know how to advance the story using movement. My visual arts education became a tool that helped me combine my dance background and my artistic background. I found that I loved to create visual patterns and movement, but also I could look at the characters and the stories to create a movement that would draw the audience in and tell the story in a meaningful way. These two approaches to creating movement and dance are not superior to one another, it was just a new way of thinking for me. I found it to be inspiring to work with actors who brought their own ideas, and now I love collaborating with the directors and the technical team to bring a story to life.

Commercial for Sweet Charity in the Underground – Amber Burns Directed and Choreographed, April 2018 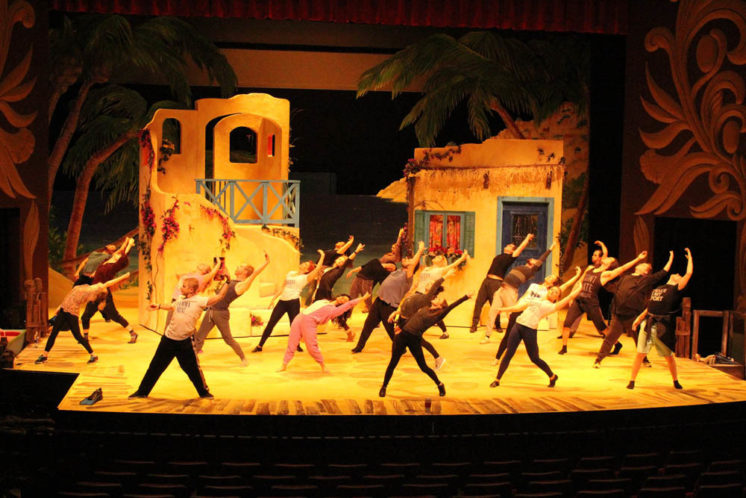 In 2015-2016 I also had show with my paintings, called Northern Force, displayed at the Zeitgeist Arts building. This work was a series of animals found in the Northland, but it also showed my interest in movement, displaying energies that surround us. You can see examples of my work on my website at amberburnsart.com. Amber Burns as Tinker Bell in The Duluth Playhouse’s production of Peter Pan, 2013

Up next I am choreographing Newsies for the children’s production at the Duluth Playhouse Family Theatre, which opens at the end of February, and I will be directing and choreographing Grease on the NorShor stage this summer!

Amber Burns, performing with Zach Stofer, and choreography by Amber Burns – Spring Awakening at the Renegade Theater February 2012 “The Dark I Know Well”

Brooklyn Art Library claims to hold the largest collection of sketchbooks in the world with more than 41,000 sketchbooks on...