When did they put the lid on Enger Tower? 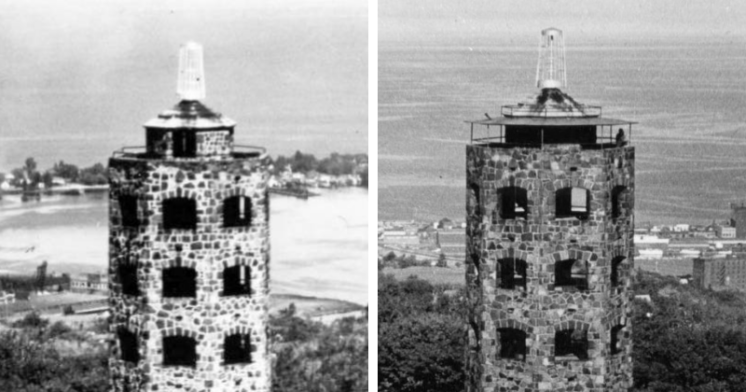 A 1954 film recently posted on Perfect Duluth Day led Lars Waldner to wonder about the roof that’s been on top of Enger Tower for decades, but isn’t there in the movie.

“I didn’t realize Enger Tower used to have an open top on it,” he wrote on Facebook. “Anyone know when that changed?”

The vague answer would seem to be the late 1950s or early 1960s. If anyone can narrow that down, go for it in the comments.

The images above are both from the Northeast Minnesota Historical Collections at the University of Minnesota Duluth’s Kathryn A. Martin Library. Both were shot by Perry Gallagher. The image at left is purportedly from the 1950s; the one at right is from after the Duluth Arena was constructed in 1966.

Here are fuller-view versions of the photos: And just for fun, below is an image shot by Elizabeth Goodsell dated June 9, 1973: For bonus points, explain why some twit spray painted “SPE” at the base of the tower and a nearby rock. I recently came across this footlocker-style trunk and inside it had a sticker from the Duluth Trunk Factory. I’m wondering if...