Postcards from the Flame excursion boat The undated postcard above, published by Gallagher’s Studio of Photography, shows the Flame excursion boat entering the Duluth Shipping Canal. The second card in this set is also from the Gallagher Studio. The caption on the back reads:

The excursion boat “Flame” with a load of sightseers examining two foreign ships from Europe. These ships are loading grain at the Peavey elevators in the Duluth-Superior Harbor, Westerly Terminus of the St. Lawrence Seaway. 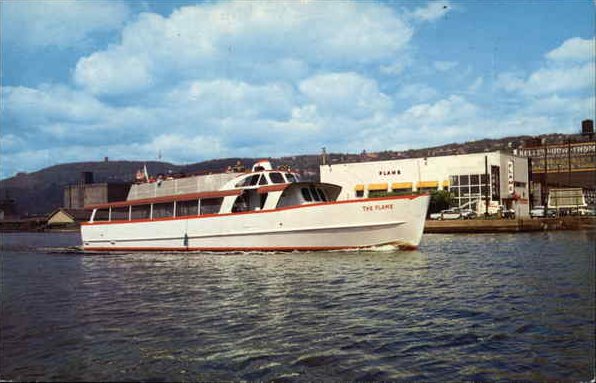 And the third card in the set, also from Gallagher’s Studio, shows the Flame passing the restaurant of the same name, situated where Great Lakes Aquarium is today. The back of this card notes passengers boarded the ship from a dock at the foot of Fifth Avenue West. Six trips departed daily at 10:30, 1:30, 3:30, 5:30, 7:30 and 9:30. The cost was $2 for adults and $1 for children under age 12.

According to the Duluth Vista Fleet History, the harbor excursion business was founded in 1959 by Ted Gozanski, Hyman Kaner and Jimmy Oreck. Gozanski was a partner with Hyman Kaner in an operation called Bum boats. Oreck owned the Flame restaurant.

They began with a boat named the Streamliner with a capacity of 96 passengers. Business increased rapidly and shortly after, the Flame, a 108-passenger boat, was added. In 1961, the Streamliner was traded for the Flamingo, a 144-passenger boat. … In 1968, the Duluth dock site was moved to its present location on the harbor side of the Duluth Entertainment Convention Center.

In 1973, more expansion was necessary. The Barker’s Island Superior dock was built and a new 256-passenger boat was delivered to replace the Flame. The Vista Queen was the newest, most modern sightseeing vessel on the Great Lakes. The harbor became the focal point of Duluth and Superior’s growing tourist industry.

The Flame is operating in Buffalo, New York. The Flamingo is operated by the Star Line from St. Ignace to Mackinac Island and has been renamed the Nicolet.

Where in Duluth? PDD 15th Anniversary Challenge #13 of 15