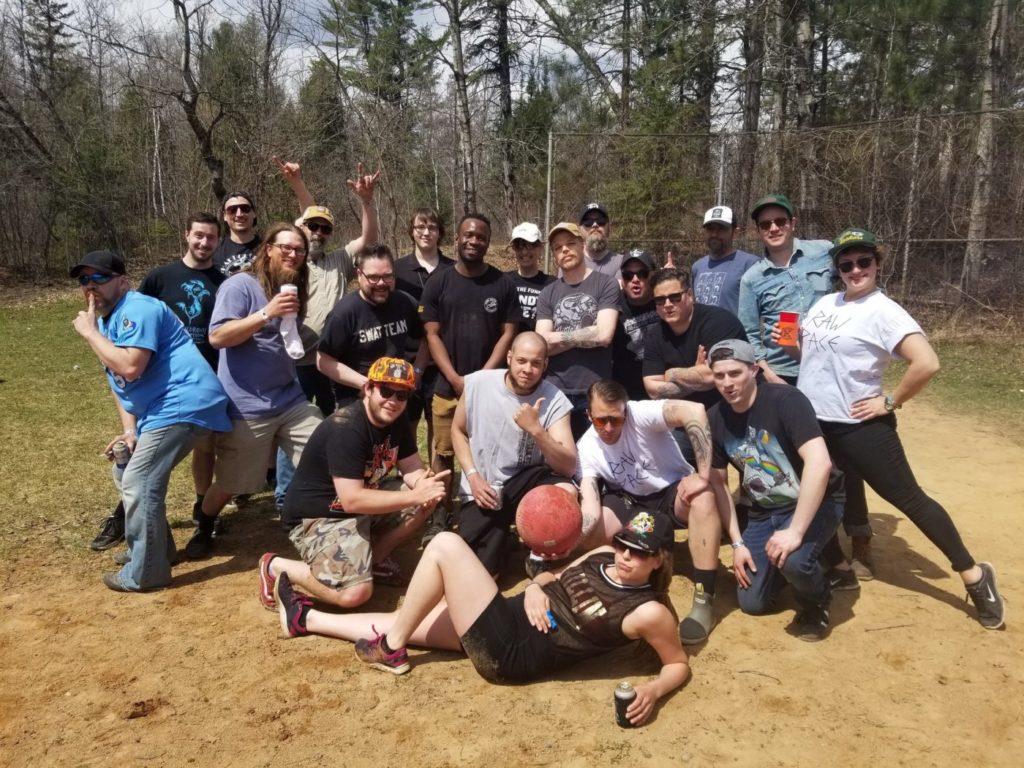 Team Saturday celebrates its 2018 victory in the Homegrown Kickball Classic. The 5-2 win brought Saturday into a 10-9 overall series lead.

After losing nine of the past 10 games, the Saturday bands came back to beat Friday 5-2 in the 19th Homegrown Kickball Classic, pulling ahead in the overall series 10-9. 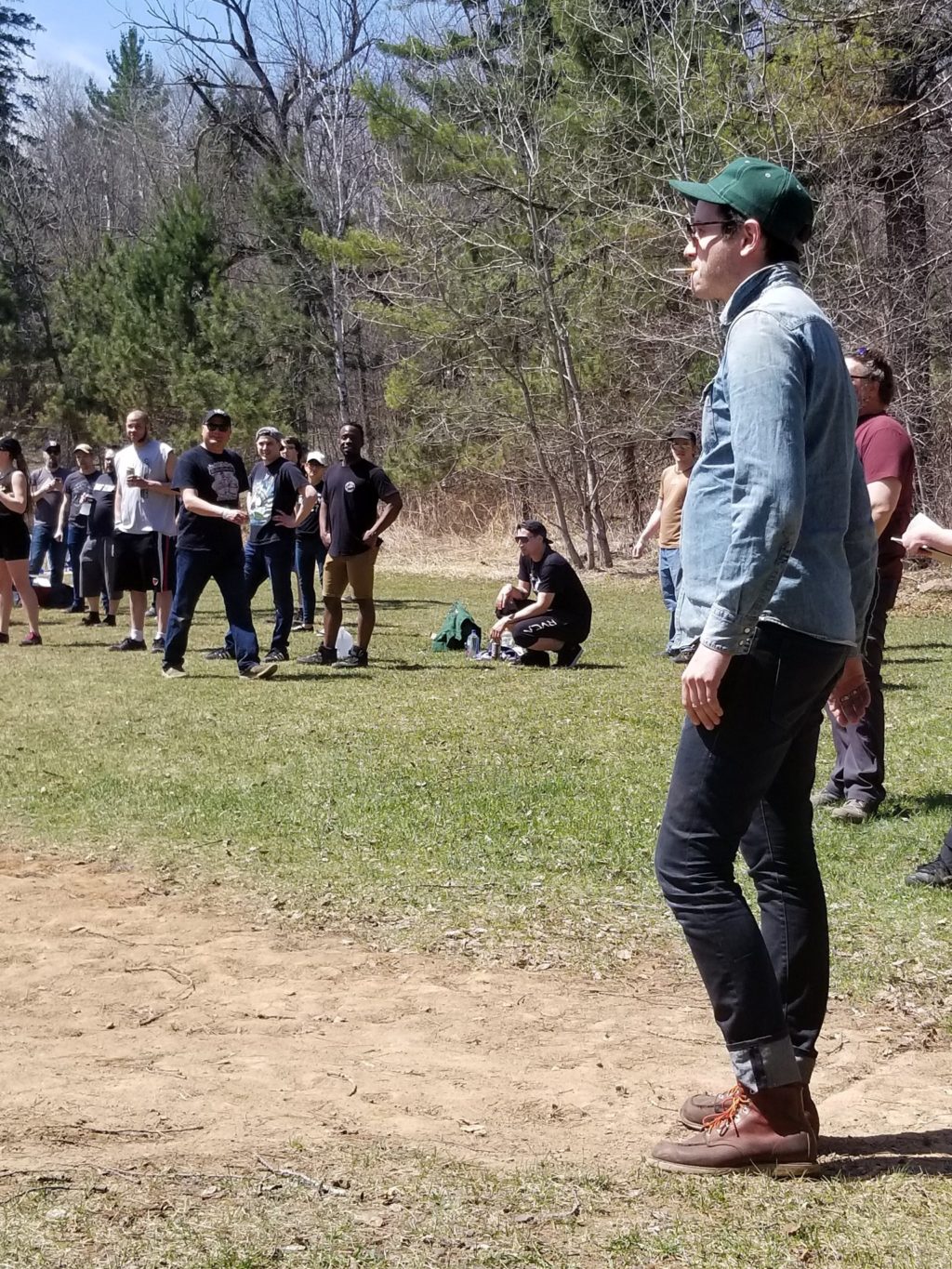 Jordan Taylor has a cigarette while waiting to kick.

The Saturday Rollers took the lead in the first inning, with Nick “MidiEvil” Pawlenty reaching home on a bunt from Bryan “Lefty” Johnson. Saturday Coach Ellen Vaagen took over for Paul Lundgren, who was absent from the Homegrown kickball game for the first time ever.

In the bottom of the first, Chris LeBlanc of Prone scored for the Friday Rawkers, evening the score at 1-1. After kicking a foul ball directly into the crowd, Alex Piazza of Àlamode and Big Wave Dave and the Ripples got out on a catch from Chad Brown, aka C-Silence.

Saturday took a 3-1 lead in the top of the second, with runs from Alberto Serrano Rivera (A Winter Downpour) and Jason Ratajek (Bratwurst). 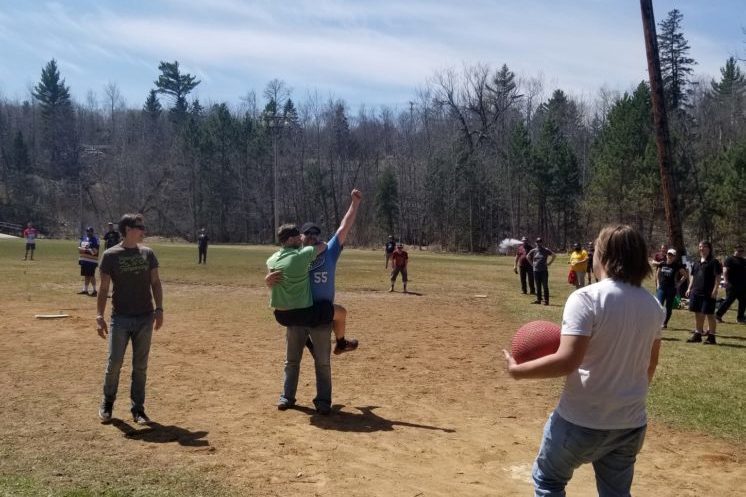 From the bottom of the second to the top of the sixth, both teams hit a bit of a dry spell when it came to scoring runs.

There was still plenty of action, though. The five-foul-ball limit was opened up to some intense scrutiny by the right-skewing foot of Heaven’s Gate Away Team’s Jacob Swanson. (Ian Vincent: “He’s on my team and I don’t even think he should have five fouls.”)

Saturday’s most controversial player may have been Jaw Knee Vee, who was named MVP for Friday last year and returned this year only to switch teams. He declined to provide a reason for the change of heart and day.

He stepped up to the plate in the top of the sixth to calls of “Friday night traitor,” but nonetheless made it home on a kick from James Spach, who made it all the way, bringing Saturday to 5-1.

No scores in the bottom of the sixth, but Ryan “Mus-turd” Nelson dropped the pretty funny “You’re playing deeper than your hairline out there” before bunting and becoming his team’s third out. 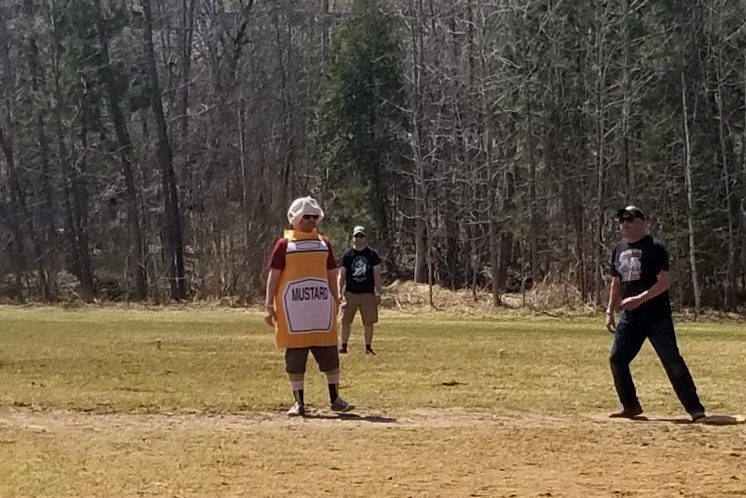 Ryan “Mus-turd” Nelson in the outfield.

In the bottom of the seventh, Al Fuckin’ Church stepped in as a pinch kicker for Gaelynn Lea, who made it to first — and then to second on a kick from Leon Rohrbaugh (A Band Called Truman). When Rohrbaugh’s kick was caught, Lea was forced to return to first but didn’t make it in time.

Fuckin’ Church has filed an official complaint with the media of record (Perfect Duluth Day) that he, as Lea’s designated runner, did indeed tag out.

In the top of the 8th, Friday held Saturday to its five points. In a particularly exciting third out, Friday pitcher Chad Lyons caught Saturday Coach Vaagen’s kick with a flying leap that landed him on his back.

Friday notched another run in the bottom of the eighth as Scott Millis made it home on a kick from Craig Modean.

Jaw Knee Vee again made waves at the end of the eighth, with several eyewitnesses saying he took out a pocket knife and slashed the game ball. “It was a malicious act,” swears Ryan Van “Malibutin” Slooten. “I saw it very clearly. I was a key witness to a horrendous crime.” 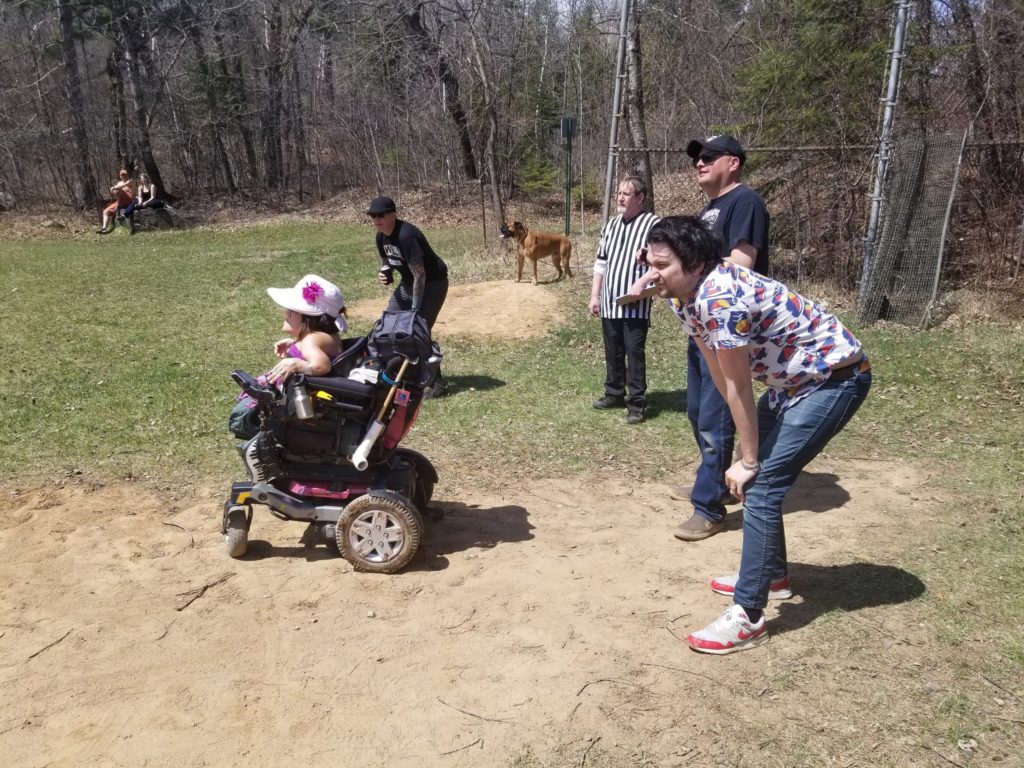 Al Church pinch kicked for Gaelynn Lea, who got to first for Friday.

Another ball, nearly identical to the first, was located. Play resumed shortly thereafter.

Saturday did not score in the top of the ninth, giving Friday one final chance to catch up. After a pep talk from Coach Heiko and Al Fuckin’ Church, a very Crunchy Bunch lineup of kickers came out, with Dan Branovan and brothers Chris and Alex LeBlanc. Friday fought hard but didn’t get any players home, leaving the final score at 5-2 Saturday after Al LeBlanc, Ned Netzel and Jon Choi went out.

“Feels good to be a winner today,” Coach Vaagen said after the victory that propelled Saturday back into the overall series lead at 10-9. 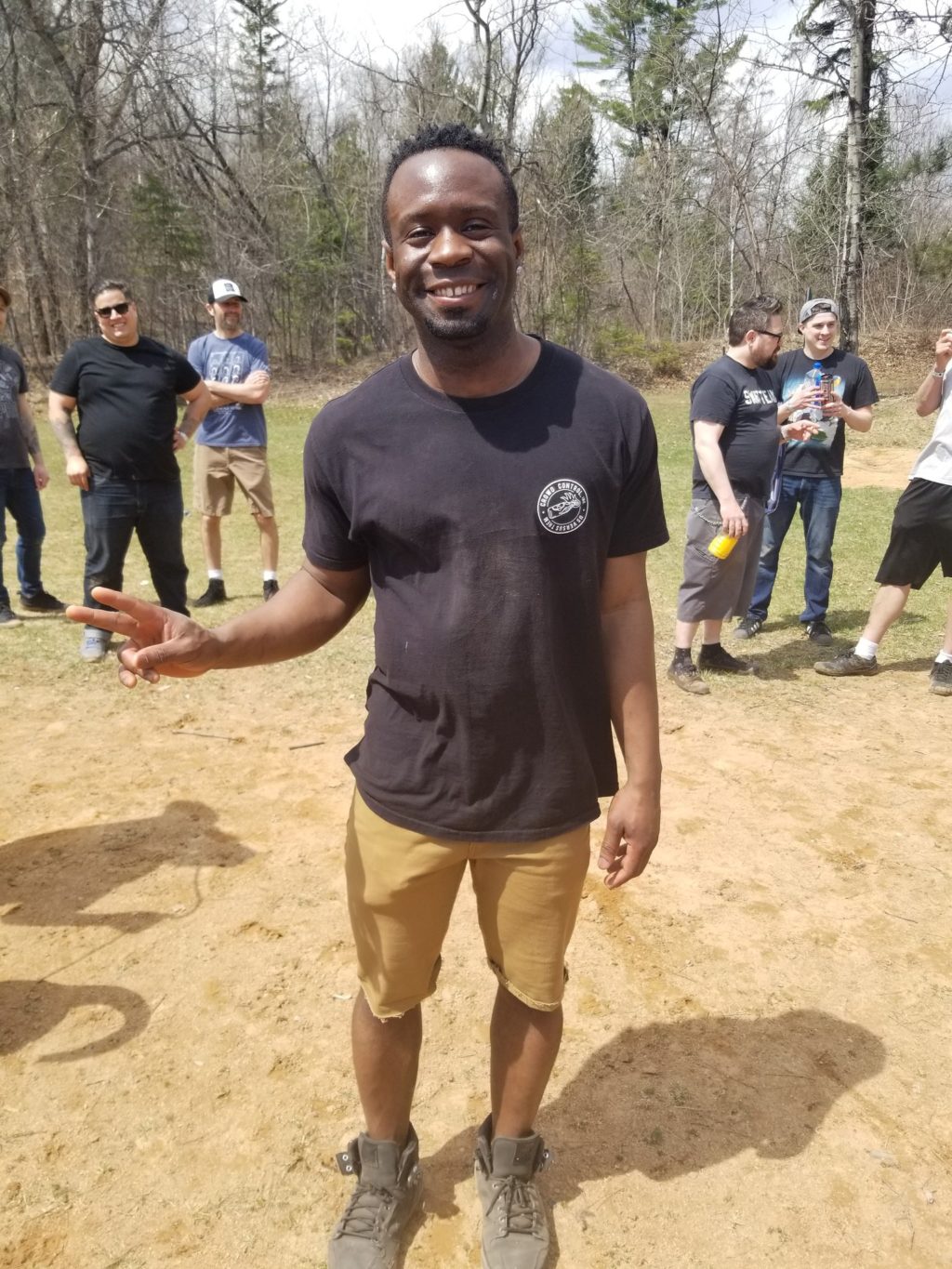 El Karnwie-Tuah, who raps as EL.I.BE and was slotted to perform with Willie Diction Saturday night, was named MVP. With a magnetic grip out in left field, he caught more kicks than just about anyone else on the field throughout the game.

“We crushed it and we had a good time while doing it,” he said, giving credit to his team for the victory.

Heiko valiantly took the title of LVP for the Friday Rawkers, saying, “I refuse to let anyone on my team get LVP.”

Dan Branovan drank too much like he does every year.

The game’s Most Valuable Snack was an absolutely delightful taco station provided by Prone. Most Lovable Pep Band, organized by tuba player Kala Shepersky, kept the crowd in good spirits with ditties that included a stirring rendition of “Sweet Caroline.” 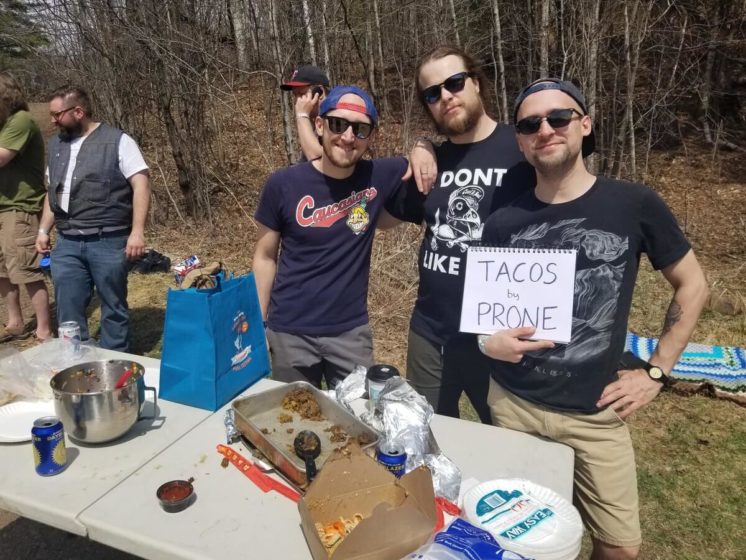 M.V.T.S. (Most Valuable Taco Stand): Prone (members of the Crunchy Bunch and Àlamode)

Blood and bone, rivers and stone, are all of a piece, you see. For millennia we knew this, knew we...