The Lincoln Hotel stood at 317 W. Second St. from 1926 to 2004. The location is now a parking lot for St. Louis County’s Government Services Center.

The four-story red-brick building was designed by Harold Starin and A. Reinhold Melander. It had 105 rooms and was originally considered a luxury hotel. By 1973 it was low-income housing and later became a residence for senior citizens and recovering alcoholics. It closed in 1988 and deteriorated until the city of Duluth acquired it for demolition. 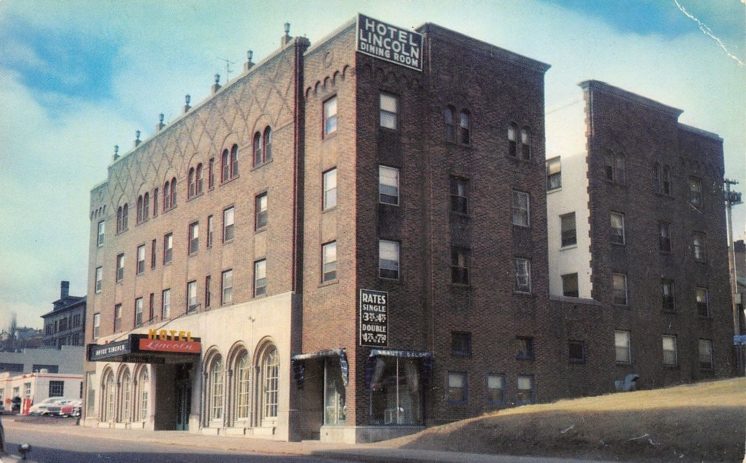 The text on the back of the postcard above reads:

The Lincoln is centrally located and is convenient to shopping district.
Parking Lot – Dining Room – Banquet Facilities
One Block West of Duluth Clinic

There is plenty more info about the Lincoln on the web, including posts on Zenith City Online, the News Tribune Attic and an interesting look at the dilapidated conditions of the building in 2002 — as well as more historical info — by a Minneapolis “urban adventuring” group called the Action Squad.

Below is a photo by Tony Rogers, who has a gallery of Lincoln Hotel demolition shots on his website.