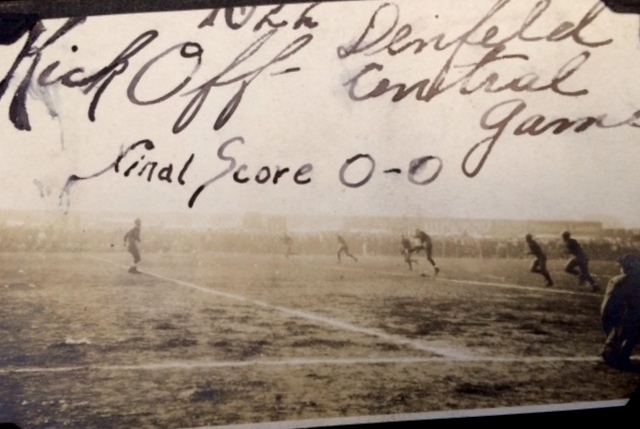 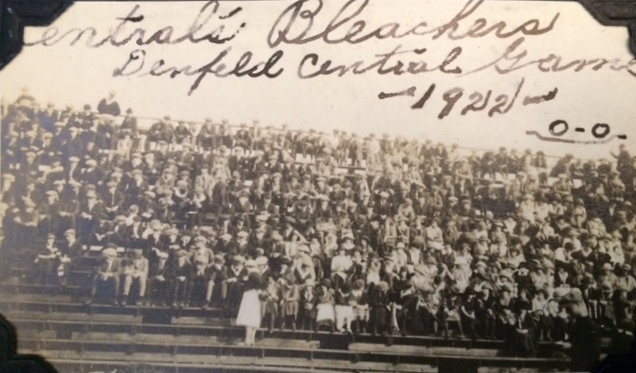 Duluth’s Jay Sonnenburg found these 1922 photos among his grandfather’s collection. They depict scenes at Athletic Park in West Duluth, where Duluth Central and Denfeld did battle on the gridiron.

The two teams played their first game five years earlier, in 1917. That contest set the tone for a century of animosity between the schools. Denfeld won 6-0, but the game was overshadowed by a halftime riot among spectators that was broken up by the Fourth Minnesota Infantry.

The game on Sept. 30, 1922 had no violent theatrics and was fought to a draw, as indicated by the writing on the photos. “Final score 0-0.” The result was considered a letdown for Denfeld, which had been favored to win.

Prior to the game the Duluth News Tribune noted:

Last year Denfeld won a 27-7 victory over the Red and White eleven. This year the dope again favors the West Duluth school.

With 10 veterans back in the lineup Coach (Bill) Monat has drilled what looks like a championship team. The one-sided victory over Nelson Dewey last week has put the Denfeld team into real form. Every night has found this West Duluth eleven in signal practice.

Coach Ray Parkins, a man who talks little but acts a lot, is silent on the possibilities of his team. All he says is that Central will be in there fighting and promises Denfeld a real battle.

And a “real battle” it was. Below is the Duluth News Tribune’s report of the game.

In baseball the pinch hitter who clears the sacks with a hit and gives the home team a victory is the hero. In football the unknown sub who replaces the team’s star and shows up even better than the man he replaced holds the same position. This usually happens in fiction. It came true in life yesterday during the Denfeld and Central scoreless tie game. The hero is little Peter Antilla, a youth who is in his early teens and looks to weigh less than 150 pounds.

Denfeld students say it is Antilla’s first appearance in a football uniform. Whether or not this is true we don’t know, but one thing we do know and that is that Antilla was the sweetest of sweet football players at Athletic Park yesterday afternoon. He was Denfeld’s only hope in ground gaining. He was Denfeld’s only hope in secondary defense. He was the star of stars.

Replacing Gerander early in the second quarter this little substitute surprised even the closest of Denfeld’s followers. At times he was held. This may be laid to the cause that he was overworked, but seldom failed to make any gains and the majority of his line plunges netted Denfeld from 10 to 15 yards. One of his line smashes netted Denfeld 25 yards.

Central was not without any stars. Kelley did the best work for the Red and White warriors. But it was his penalty which probably robbed Central of a touchdown. With the ball on Denfeld’s eight-yard line and four downs to make a goal, Kelley was accused of unnecessary roughness and Central was penalized half of the distance to the goal.

The game itself was one of hard-fought football. Frequent penalties marred the game. Denfeld was penalized twice when within striking distance of the goal. Central drew one severe penalty. Off-side penalties almost cost Central a touchdown in the last quarter. Four of these brought the ball to Central’s 20-yard line and a drop kick failed. With but 30 seconds left to play Falk tried another drop kick for Denfeld and came within inches of making it good.

Denfeld, the favorite, outplayed Central in the first quarter. Only the great kicking of Kelley saved the Red and White boys. Few line plunges were tried by Central and Kelley’s punts averaged 30 yards. A 15-yard penalty for holding with the ball deep in Central’s territory took the heart out of Denfeld in this period.

The second period found Central with a new lease on life. Denfeld was outplayed and only the great line plunging of Antilla saved the Gold and Maroon boys.

The third and fourth quarters found the teams battling on even terms. Central lost an opportunity when Kelley was put out of the game and Central penalized half of the distance to the goal. This happened in the third quarter. Denfeld opened an aerial attack in the fourth and came close to scoring.

It really was a pleasure to see the old high school spirit return. Fully 4,000 saw the game. Each school had its band. Both rooting sections showed good sportsmanship by cheering players on the opposing teams.

Antilla so far outshone the rest of his teammates that he really was the individual star of the game. Kelley did the best work for Central, both on the offensive and defensive. Coventry played a great defensive game at center for Central. (Leo) Method, last year’s all conference tackle, showed that he was no false alarm. He was the tower of strength in the Denfeld line. Time and again he broke through and nailed a Central man.

Bernard did great offensive work for Denfeld. Next to Antilla he was Denfeld’s best ground gainer. Falk and Kelley broke about even in punting honors, although a slight advantage may be given to the Central man.

Cathedral players were on the side lines and were among the most interested spectators. Cathedral has yet to meet these two teams. Last year Cathedral defeated Central but lost to Denfeld.

The work of the officials was pleasing. Although each team was frequently penalized they deserved it and the officials played no favorites.

Coaches Monat of Denfeld and Parkins of Central are to be congratulated on the team they turned out with the raw material they had to work with.

Both teams will improve as the season progresses and when Cathedral meets either eleven fans can rest assured of seeing a classy hard-fought football struggle. [Editor's note: It's been a decade since smoking cigarettes was permitted in Duluth bars. The Minnesota Clean Indoor Air Act...